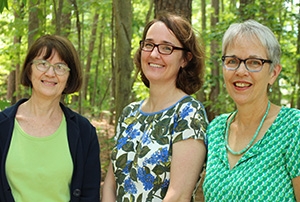 The Law School’s oldest clinic, founded in 1996 as the AIDS Legal Project, is now known as the Health Justice Clinic. Clinic faculty and students now assist clients with legal matters stemming not only from HIV and AIDS, but also from cancer diagnoses. The AIDS Policy Clinic, established in 2010, has been renamed the HIV/AIDS Policy Clinic, a reflection of the fact that new treatment protocols have increased the population of individuals living with HIV as opposed to AIDS.

The AIDS Legal Project recently began offering legal services to qualifying clients referred by the Duke Cancer Center, as the legal needs of this patient group are similar to those of the HIV population the Legal Project has long served. Referrals from the Cancer Center have created new opportunities for clinic students to engage in direct client representation as they draft wills, establish guardianship plans for children, and pursue health benefits claims, among other matters.

“There is a lot of overlap in the subject matter we address on behalf of these clients,” said Allison Rice, who will become Health Justice Clinic director on July 1, taking over from its founder, Clinical Professor Carolyn McAllaster, who directs the policy clinic. The name change will facilitate the clinic’s ability to apply its core expertise in other areas relating to health and justice, she added.  “Other patient groups face similar needs, so we want to be open to further expansion as needs arise, from clients with other serious medical conditions.”

The clinic’s work on behalf of cancer patients complements that of the Cancer Pro Bono Project, for which Rice trains Duke Law student volunteers in interviewing clients and drafting advanced directives. Students in the Health Justice Clinic can handle matters that aren’t easily resolved during regular drop-in legal clinics the volunteers offer at the Duke Cancer Center, such as helping patients undergoing cancer treatment exercise their rights to medical leave and insurance.

People living with HIV and AIDS remain the core of the clinic’s clients, as they have been for almost two decades. Students continue to help clients with documents relating to end-of-life planning, and engage, as needed, with more complex cases relating to such matters as breaches of confidentiality and discrimination.

As new treatments have resulted in improved health outcomes for people living with HIV, the clinic has seen a shift in demand for some legal services, such as standby guardianships, which allow parents to make permanent plans for the care of their children in the event they are incapacitated by illness. The clinic has seen a heightened demand for that service by clients with cancer, Rice said.

“These are wonderful learning tools for students, as they have to interact closely with clients yet can be managed in the course of a single semester,” said Rice. “We have a wealth of expertise in establishing standby guardianships, and have done the vast majority of those filed in North Carolina.”

Melissa Morgan ’15 credits representing clients in the Health Justice Clinic over two semesters with making her “feel like” a lawyer. “Having real clients that depend on you transforms the abstract knowledge from class into real-life lawyering skills,” she said. “The difference we made in our clients’ lives was often immediately visible.”

Morgan helped one long-term clinic client in his fight to gain critical Social Security disability benefits, writing a brief that is currently before an administrative law judge, collecting affidavits on his behalf, and interviewing witnesses, all under the supervision of clinic faculty. Drafting wills and advanced directives was also a useful skill to learn and offered many clients tremendous peace of mind, she said.

“Because the law does not protect unmarried couples, many of my clients were afraid that if something were to happen to them, their family would prevent their life partner from remaining in their joint home, or from accessing their money or other assets. They were grateful and relieved to have these documents prepared, because it gave them assurance that their loved ones would be protected if they passed away.”

Morgan’s lengthy representation of one client helped her realize the importance of counseling and advocacy, she said, even though the multiple grievances she filed on his behalf were ultimately unsuccessful. “L” had contacted the clinic in distress after several medical providers openly discussed his HIV in front of other patients, thus putting his diagnosis “on the community grapevine,” she said.   “I talked to L frequently, listened to his stories, and reassured him that I cared and was fighting for him, and that his life did matter. He told me regularly that our clinic was an answer to his prayers, and that having someone on his side meant more to him than any legal remedy.”

Rice becomes director of the Health Justice Clinic after serving as clinic supervising attorney since 2002. A senior lecturing fellow at Duke Law, Rice has worked in public interest and poverty law throughout her career, including as managing attorney for Legal Services of Southern Piedmont in Charlotte. She also works on policy issues relating to implementation of the federal Affordable Care Act.

Senior Lecturing Fellow Hannah Demeritt ’04 continues to supervise students in their direct representation of clients in the Health Justice Clinic. Demeritt, who joined the clinic team in 2007 while still maintaining a solo criminal defense practice, has extensive experience in appellate litigation and the representation of indigent clients.

McAllaster, who has directed the HIV/AIDS Policy Clinic since it was established at Duke Law in 2010 as an outgrowth of the AIDS Legal Project and an advanced clinical offering for students, now focuses full time on policy issues relating to the ability of people living with HIV and AIDS to access care and treatment and supervises students in related research and advocacy. She also serves as project director for the Southern HIV/AIDS Strategy Initiative (SASI), a broad-based coalition launched in 2011 to advocate for increased federal resources to stop the spread of HIV in the South, where infection and AIDS death rates are high. The policy clinic, which has attracted significant funding from the Ford Foundation and the Elton John AIDS Foundation, among other sources, is a founding SASI member and institutional leader.

Rice said McAllaster, who received the American Bar Association’s 2014 Alexander D. Forger Award for Sustained Excellence in the Provision of HIV Legal Services and Advocacy, has gained a national profile as a policy advocate. “She is fearless, intelligent, and has the ability to keep people with differing interests working towards a common goal,” she said. McAllaster continues to teach AIDS and the Law.

As a policy clinic student throughout his third year, Jerry Fang ’15 collected stories from people living with HIV in the Deep South to bolster advocacy for renewal of the federal Ryan White HIV/AIDS Program, which supports essential services not covered by the Affordable Care Act (ACA). He also crafted a white paper that was submitted to the Centers for Disease Control and Prevention (CDC) opposing its policy of directing HIV-prevention funding to only a limited number of large urban areas.

“The HIV prevalence in the South is not located in the bigger cities, but in rural areas and smaller urban areas like Durham,” Fang told the Duke Law Advocate last spring. “The white paper focuses on how the CDC policy is squeezing funding of prevention initiatives in the South and will create greater problems in the future.”

Fang joined McAllaster at a meeting in Atlanta with the CDC’s director of HIV and AIDS prevention to discuss the policy proposals. “People at the CDC read the report and said they were struck by certain things in it that they had not previously known. That’s very gratifying,” he said. “What this clinic work offers that a lot of classroom work can’t, is a direct connection to real-life effects of policy and law.”

Bookbagging for the Health Justice Clinic and the HIV/AIDS Policy Clinic begins in July. Visit the registration portal