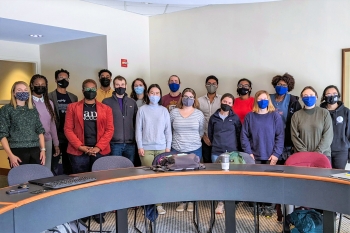 The school-to-prison pipeline is the “growing pattern of tracking students out of educational institutions, primarily via ‘zero tolerance’ policies, and tracking them directly and/or indirectly into the juvenile and adult criminal justice systems,” according to author Nancy Heitzeg, professor of sociology and critical studies or race and ethnicity at St. Catherine University. Heitzeg’s The School-To-Prison Pipeline: Education, Discipline, and Racialized Double Standards was the primary text for the course.

“What we really liked about her materials is that she approached this crisis from so many different perspectives,” said Grant, Children’s Law Clinic’s director. “In her materials she talks about capitalism, she talks about the American education system, [and] she talks about social control. She touched on the prison-industrial complex, housing, segregation, [and] the medical perspective. It gave us that deep dive that we were looking for.”

Grant and Nicholson said the course directly relates to their work in the clinic, which often involves children of color and children with disabilities, “two populations that are disproportionately impacted by the school-to-prison pipeline.”

“These are all topics that can really push some buttons and so we wanted to prime them to feel safe and open,” she said. “One of the things that we did the very first day was try to make it a safe environment by coming up with some ground rules. Students came up with rules that they thought would make the classroom a very safe place for these discussions.”

Dylan Jarrett, a third-year student taking the Children’s Law Clinic this fall, said her mother’s work as a kindergarten teacher and her own desire to learn more about law at the intersection of racial justice and the school-to-prison pipeline drew her to Grant and Nicholson’s course.

“The students were able to share their own experiences and thoughts,” Jarrett said. “We had such a diverse set of students, such a smart set of students in that class. One of the students is pursuing her PhD in Education and so she had incredible insights. We had a few former teachers. We had a great group.”

Added Clara Nieman, a second-year student and the mother of a toddler: “I think there was, at least from my perspective, an understanding that people were really coming to this class in a very good faith way. And that not everyone has all of the answers and that everyone’s experiences are very substantively different.”

2L Jordan Fason, whose mother taught special education, brought her experience working with disadvantaged and developmentally disabled students while in high school and at Cornell University. She said, “For me, it was nice to talk about things practically. I think that was definitely highlighted by having these guest speakers who are doing the work – not just in general, but in the Durham community.”

Nieman recalled hearing a local mother’s emotional story about her teenage son’s experience in in-school suspension at Durham School of the Arts in 2018. Rev. Dr. Fatimah Salleh joined her son for two days of the suspension and later posted ‘Open Letter to Durham County Schools, Parents and Guardians’ on Facebook. The post went viral, grabbing local and national headlines and driving her to advocacy.

“She came to tell her story and she brought her mother with her, as well,” Fason said. “For me to hear her story – and she did not separate the work that she was doing and the data, the statistics – but also the emotional part of that and the toll it took on her family, and what steps have happened and what next steps she was taking. She was very candid, and I love that that was allowed in that space. Many of us ended in tears.”

Added Jarrett: “I think that the day that she came to speak to us was probably one of the most memorable classes I’ll have had in my entire time at Duke Law.”

With a solution-oriented focus, the course’s final two classes delved into legal and policy solutions and reforms. Students gained an understanding of the current work being done by parents, administrators, policymakers, advocates, and lawyers.

“One of the best parts of the course was talking about the alternatives to the system,” Jarrett said. “We spoke a lot about restorative justice. We learned a lot about organizing parents, kids, and teachers and the change that can happen.”

Jarrett said that after graduation she’ll be joining a firm with a large public interest and pro bono practice, where she’s looking forward to putting the pro bono skills she’s learned at the Law School to work.

Nieman credited the readings course with not only providing a working knowledge of children’s law in North Carolina, but also equipping her with tools to help her decide how best to use her experience as a parent and lawyer in pro bono work. The course also taught students how to access related research, draft proposals, and engage with advocacy, according to Fason.

“Our guest speakers [at the last class] talked about the importance of listening to the people most impacted by social issues. You can’t solve big social problems or be a meaningful part of social justice movements if you aren’t following the lead of those most affected,” Nicholson said.

An additional takeaway: learning how to develop interdisciplinary solutions.

“Hopefully, the deep dive into the different systems and perspectives really imprinted on the students that this school-to-prison pipeline crisis is a result of many system failures and they all overlap,” Grant said. “The solution will need to be interdisciplinary. It will need to focus on many different systems coming together to improve the way we respond to youth and support them.”

Both Grant and Nicholson say they’re open to teaching the readings course again, pointing to it as a wonderful forum to exchange ideas about challenging topics.

“Our students are ready for these conversations, and we have so much to learn from them if we create the parameters to make it happen,” Grant said.