Members of the pro bono project have facilitated the early release of five North Carolina men in the past two years. 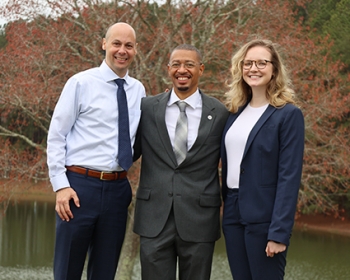 A North Carolina man sentenced to life without parole as a juvenile was released from prison March 24 after Adelyn Curran ’22, working with Clinical Professor Jamie Lau ’09, successfully petitioned the governor for a commutation.

Gov. Roy Cooper on March 10 issued grants of executive clemency for Anthony Willis, April Barber, and Joshua McKay, all of whom were sentenced to 20 or more years for crimes committed as juveniles. Curran, a member of Duke Law’s pro bono NC Clemency Project, prepared the materials for Willis’s clemency petition. Willis received a sentence of life in prison without parole in 1997 for killing a Fayetteville store owner when he was 16.

Two weeks after Cooper announced the commutations, Willis walked out of Gaston Correctional Center in Dallas, N.C., where he had spent the last 25 years. Arms upraised and flanked by a beaming Curran and Lau, he walked away from the prison gates and into a waiting crowd of family and friends.

Lau, who leads the NC Clemency Project, said that Willis had earned his second chance and was prepared to make the most of it.

“[The governor's] decision recognizes that the interests of justice include mercy for people who have demonstrated rehabilitation while incarcerated,” he said. "It is widely understood that people change—that a person in his teens is not necessarily a reflection of who he will be in his forties or fifties."

Lau said Willis had worked diligently to change from the person he was at 16, earning bachelor’s and master’s degrees while incarcerated and learning sign language to assist an incarcerated deaf person.

“Most importantly, he has earned the respect and friendship of those who have crossed his path. His petition was supported by more than 30 people who attested to the kind and humble person Mr. Willis has become.”

A 2015 Fayetteville Observer profile described Willis as a model person during his incarceration who was remorseful over his crime and had become a leader and mentor to other men in prison. Several years ago he was resentenced to life with the possibility of parole.

While the U.S. is the only country in the world that still allows juveniles to be sentenced to life in prison, and North Carolina is one of the leading states imposing such sentences, Cooper acknowledged in a statement that scientific understanding of brain development and juvenile behavior has evolved.

“North Carolina law continues to change to recognize that science is even more clear about immature brain development and decision-making in younger people,” Cooper said. “As people become adults, they can change, turn their lives around, and engage as productive members of society.”

"Living proof" of a person's capacity for growth and rehabilitation

The three sentence commutations are the first by Gov. Cooper since he took office in 2017 and the first in North Carolina since 2009.

Willis’s commutation is not the only one with a Duke Law connection; Joshua McKay was represented by Johanna Jennings ’11, founder and director of The Decarceration Project, a Durham-based nonprofit. He also was released on March 24.

During his 20 years in prison McKay, incarcerated at 17, completed two apprenticeships to become a journeyman carpenter and welder and earned the right to live in minimum custody and participate in work release. Nine of his supervisors wrote letters in support of his clemency petition.

"Josh took advantage of every opportunity for personal and professional growth while in prison," Jennings said, calling McKay "living proof" of a person's capacity for rehabilitation.

Willis’s release is Curran’s second successful effort to achieve relief for a client facing a life sentence, and the fifth total release of clients taken on by student members of the NC Clemency Project, a pro bono initiative launched by Lau in January 2020 to identify people who have served a substantial amount of their sentence and whose demonstrable rehabilitation and lack of infractions in prison qualify them for clemency.

Candidates are matched with student volunteers who interview candidates, prison officials, family members, and other supporters, and collect information to prepare a memo that is reviewed by supervising attorneys affiliated with the Center for Criminal Justice and Professional Responsibility and turned into a petition submitted to Cooper’s Clemency Office.

Willis’s case came to the group’s attention in November 2020 through a referral by Rev. Anthony Spearman, past president of the North Carolina NAACP. Curran visited Willis three months later and called him “one of the kindest, most thoughtful people I have met.”

“During his 25 years of incarceration Mr. Willis has made an impact on every person he’s met, at every prison he’s been to, and he has built dozens and dozens of close friendships. He is an extraordinary person and I feel lucky to know him,” Curran said.

“We are all so thrilled, grateful, and relieved that the governor has granted Anthony the opportunity of clemency.”

Willis’s release is the first commutation the project has secured from the governor, while the first four cases involved achieving relief through alternative pathways. Other successful efforts by the Clemency Project include the Nov. 4, 2020, release of Calrutha Johnson after spending more than 31 years in prison. His case was built by Curran ’22 and Kate Goldberg ’22, who argued that Johnson deserved clemency, in part, because he had not had a single infraction during his incarceration and had made good use of his time by earning a bachelor’s degree. They also discussed the importance of Johnson’s freedom during a global pandemic due to a pre-existing medical condition making him vulnerable to severe illness from COVID-19 and the inability to socially distance or take other precautionary measures to protect his health in a prison facility.

In another case, Edward Scott was released in June 2020 after the state reviewed materials prepared by Angela Sbano ’22 that documented Scott’s successful completion of a GED and multiple self-help programs while spending more than 29 years in prison.

Scott’s petition was referred to the parole commission, which approved his accelerated release. “It is a truly humbling feeling to know that my efforts made a positive impact on his life,” Sbano said. “Speaking with him on the phone after his release was one of the happier moments I have had during law school.”

Another client who gained release was assisted by Michael Chen ’21, who was thrilled to speak with his client upon release and be invited to a celebratory fish fry.

Curran, who will start her career at Quinn Emanuel in Atlanta after graduation, said she plans to continue working on criminal matters while in practice.

“The Clemency Project has been the single most important part of my time at Duke Law,” she said.