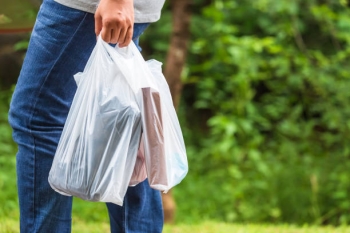 Note: This article was published in the Fayetteville Observer and other papers on Jan. 18. It is provided here to circumvent the online paywall.

In 2009, the Outer Banks became the first place in North Carolina, and one of the first places in the country, to ban single-use plastic bags. It didn’t last.

The ban was the brainchild of Democrat Marc Basnight, the long-time leader of the State Senate, who, near the end of his tenure, pushed through a bill barring businesses from offering plastic bags within parts of his coastal district.

Over the next few years, as more states and cities across the country passed anti-plastic bag measures, Outer Banks residents embraced their ban.

“Our local community is very much environmentally sensitive,” said Karen Brown, president of the Outer Banks Chamber of Commerce. “We were no longer seeing bags flying all over our roadways or on our beaches or in our waters."

But by 2017, North Carolina’s only plastic bag prohibition was in peril. Basnight had retired, and Republicans claimed a supermajority in the legislature.

In Raleigh, the North Carolina Retail Merchants Association (NCRMA) lobbied against the ban, arguing, in part, that it burdened business owners to pay more for paper bags.

The NCRMA brought a lot of resources to the debate: In 2017, the association employed four lobbyists and spent $265,500 on lobbying. Its political action committee counted large companies like Walmart, Walgreens, and Publix as recent donors.

But the plastic bag ban remained popular locally. As talk of repealing the policy swirled, Rep. Bob Steinburg (R-Chowan) told the Outer Banks Voice he received 50 pro-ban messages for every one message against it.

“I sent like 900 emails (to our local representative) from businesses here opposing lifting the ban,” Brown recalled.

In the fall of 2017, the General Assembly repealed the Outer Banks plastic bag ban. The vote was partisan, with only one Democrat approving the changes. Democratic Gov. Roy Cooper vetoed the bill, but Republicans had the votes to override.

“Some people are still upset,” Brown said of the repeal. “It's a bone of contention for sure."

Local bag fee on the horizon?

But this year, for the first time since the Outer Banks ban, a North Carolina community may see a new bag limitation, and it has top officials and environmental advocates in other cities watching closely.

In October, members of Duke University’s Environmental Law and Policy Clinic, in coordination with the non-profit Don’t Waste Durham, presented Durham officials with a plan to charge customers 10 cents for each disposable bag.

It would be the state's first bag fee policy and apply to all single-use bags - be they paper or plastic. Unlike the Outer Banks ban, it would be passed without General Assembly approval.

The proposal could inspire leaders in other North Carolina cities to replicate it.

“I was talking to our legal staff, and they had already analyzed (Durham's) plan,” said Asheville Mayor Esther Manheimer. "They said what Durham is doing could work from a legal standing."

“We would so be behind it,” said Bonnie Monteleone, executive director of the environmental non-profit Plastic Ocean Project in Wilmington.

But while studies show making bags costlier does shift customer behavior, there is doubt whether local governments can legally charge bag fees or enforce bans without the General Assembly’s approval.

Each year, Americans use around 10 billion plastic bags, with the cheap and convenient bags ubiquitous in corner stores and grocery stores around North Carolina.

But environmentally, critics say thin plastic bags are particularly pernicious. Each bag can take hundreds of years to decompose and microplastics may linger longer, getting into waterways and emitting toxins. They’re made from fossil fuels and frequently tangle
up recycling plants' machinery.

“It’s very common for recycling facilities to halt operations multiple times per day to cut out the plastic bags,” said Sandy Skolochenko of the North Carolina Department of Environmental Quality.

In 2014, California became the first state to ban single-use plastic bags, and today, eight states exclude them outright. But according to the National Conference of State Legislatures, 17 states not only permit plastic bags but prohibit local governments from outlawing or taxing bags.

North Carolina doesn’t preempt local bag bans, but few municipalities have tried to start significant policies without approval from Raleigh. Last year, North Carolina Democrats sponsored a pair of bills to outlaw single-use plastic bags statewide, but neither made it to a vote.

A statewide bag ban would be a legislative overreach argued Andy Ellen, president and general counsel of the North Carolina Retail Merchants Association.

“We believe that customers should have the choice on whether they wanted the plastic or the paper or reusable,” Ellen said. “We very much encourage and would like for customers to use reusable bags. We just don't think they should be mandated.”

From Roanoke, Virginia to Portland, Oregon, a growing number of state and local governments are charging customers extra for single-use bags. And the policies appear to achieve their desired goals.

Researchers at the University of Chicago found that within its first year, the Windy City’s seven-cent bag tax decreased the number of people using disposable bags by 28%.

Michelle Nowlin, co-director of Duke's environmental law and policy clinic, said adding a fee, rather than an outright ban, does more to shift customers’ long-term shopping habits. The charge applies to all disposable bags, Nowlin said, because more greenhouse gases are produced from the making of paper bags than plastic bags.

To account for lower-income customers who may be disproportionately impacted by the fee, Nowlin said Durham’s plan would exempt those on federal food assistance programs.

But others challenge whether North Carolina cities even have the right to charge more for bags, with the issue partly boiling down to a definition: Is the extra cost a fee or a tax?

Nowlin contends it’s a fee and points out North Carolina law allows “local governments the authority to set their own fees for implementation of various waste management programs.”

But the North Carolina Retail Merchants Association considers Durham’s plan to be a tax, and thus something the state legislature would have to approve.

As Durham officials move forward on what would be North Carolina’s first-ever bag charge, a potential template for other cities and counties to follow, Ellen shared that the NCRMA “would certainly consider pursuing litigation” if the proposal passes.

Beyond legal challenges, any future bag restrictions in North Carolina cities face another threat: At any time, the General Assembly could end them.

North Carolina is not a home rule state, meaning city and county governments derive their power from individual statutes passed by the General Assembly.

“Local governments have to look to state statutory authority for everything they do, and they have to do it according to the way legislature says they must,” said Frayda Bluestein, who researches public law and government at the UNC School of Government.

North Carolina law doesn’t explicitly mention whether local governments have the authority to charge extra for disposable bags. Amid this ambiguity, advocates say Durham’s bag proposal stands on solid legal grounds. But the General Assembly may not agree.

“I don’t know if a municipality has the authority to tax citizen’s bags,” said Rep. Larry Yarborough, a Republican from Person County who co-chairs the House’s Environment Committee. “I don’t think so, but I am not a constitutional lawyer.”

When the General Assembly and local governments wrangle over policies not explicitly covered by North Carolina law, the issues are often resolved in court. In a bit of ideological irony, it’s typically the more liberal cities that want local control while the conservative state legislature pushes for centralized power.

In recent decades, judges have sided with the General Assembly on a number of cases, denying local governments from limiting how much towing companies charge and from setting health ordinances on hog farms.

Local governments can come out victorious: In the mid-2010s, the North Carolina Supreme Court ruled 5 to 2 that the City of Asheville retained the right to operate its water system after the General Assembly tried to wrest away control.

But in the tug-of-war between local governments and the General Assembly, the latter can write new laws that give themselves an advantage.

With bags, the General Assembly could pass a law that states it must approve all local fee programs. This new statute wouldn’t only preempt future bag fee programs but retroactively end any existing policies that weren’t state-approved.

"That's always a risk," Nowlin said of Durham’s plan. "Will it provoke the General Assembly to strip away local government authority?"

Five years ago, the Outer Banks saw how tenuous local policies can be. With many North Carolina communities watching, Durham hopes for better luck.

Brian Gordon is a statewide reporter with the USA Today Network in North Carolina.