Pamela Gann, who served as dean of Duke Law from 1988 to1999, is stepping down as president of Claremont McKenna College this summer after serving in the role in Southern California for the past 14 years.

Gann is leaving as impressive a legacy at Claremont McKenna as she did at Duke Law.  She has overseen the hiring of 65percent of the current faculty and has successfully raised over $600 million for the school (the most of any fundraising campaign by a U. S. liberal arts college). She has helped start three new research institutes, established the Robert Day School of Economics and Finance, added $200 million in new buildings, and instituted a no-loan, need-blind admissions program.

As dean of Duke Law, Gann developed an international network for the LLM and JD programs, established the summer international program in Europe and Asia, expanded the public law program, and made interdisciplinary connections with the Nicholas School of the Environment and the Fuqua School of Business by prioritizing environmental studies and starting the global capital markets program. She led the Law School's first capital campaign, which raised more than $17 million, initiated the second capital campaign, and oversaw the first phases of the law school’s renovation.  Gann’s leadership was honored by alumni, faculty, and friends of Duke Law with the establishment of an endowed professorship in her name; it is currently held by tax law scholar Lawrence Zelenak.

Gann gives a great deal of credit to Duke for her success. Following two years in private practice, she returned to Duke as a junior faculty member in 1975 and taught tax and international law for 15 years before accepting a nomination to be dean.   “I grew up at Duke,” she says,  “from being a student, to a young professional to being a leader. I was there 27 years — it was a great part of my life.”

Gann felt an immediate connection between her experience at Duke and the role she accepted at Claremont McKenna.  “Great law schools are like liberal arts colleges taken to the professional level. One feels at home at a school of arts and sciences after being at a great law school.” As a professor of tax law and international business transactions, Gann was also attracted to Claremont McKenna for its unique concentration on academic subjects that mirrored her own interests. Claremont McKenna is a broadly defined liberal arts college with a focus on developing leaders in business, the professions, and public affairs.    Majors include economics, government, international relations, math, and science.

“Claremont McKenna is quite serious about leadership,” says Gann. “And to that end we have a focused mission on training students through the leadership program who want to be ‘in the arena’. We bring liberal arts and pre-professionalism together—we’re training students we’d want at Duke Law.”

Legal training, says Gann, has been vital to her as a leader, as was math, her undergraduate major at the University of North Carolina at Chapel Hill. She says it is not a coincidence that women like Susan Hockfield, who recently stepped down as the first women president of the Massachusetts Institute of Technology, and German Chancellor Angela Merkel, have backgrounds in math or science.

“Math is exceptional at developing critical thinking skills,” Gann says. “These skills, along with structured problem solving train you to think like a leader. Math makes your thinking crisp. If you can’t write out a problem in a logical way, you haven’t thought it through hard enough. Math training provides discipline and an outline to the process of thinking through issues.”

While Gann is the first woman to lead Claremont McKenna, a college that accepted only men until 1976, she is by no means defined by this iconic role.  “I’m focused on a different range of issues at this point,” she says. “We’ve never had more women better educated in our history. Women now make up about 45 to 50 percent of the classes at the top US law and medical schools, and around 35 to 40 percent of business schools. Notwithstanding, we have a significant way to go to see a proportionate number of women in major leadership roles. I’d like to see something that would accelerate that.” Gann attends conferences on developing women leaders, using her positive experiences as law school dean and college president to “encourage and inspire young women with the rewards of these positions.”

Gann has relished her role as president at Claremont McKenna, and feels now is the right time to move on.  “At good, private colleges, leaders are stable and have the privilege of helping the college set its own course.  There is a natural cycle: it makes sense to stay about ten years, then I think it is time to step down. During my time, we had a strategic direction — the $600 million “Campaign for Claremont” — we accomplished it, and now it is time for someone new to take over. I think a community is inspired by fresh leadership.”

After a year’s sabbatical, Gann will return to Claremont McKenna to teach courses at the intersection of law, economics, and public policy, incorporating areas of her expertise such as international political economy and foreign policy. She is also interested in developing a class on the law and public policy of the nonprofit sector. In addition to teaching, Gann will continue to pursue her involvement with numerous organizations, including the Committee for Economic Development, the International Women's Forum, and as an elected member of the Board of Directors of the Council on Foreign Relations and the American Law Institute.

Just as Gann thinks it is important to use her status to inspire women and undergraduate students, she knows how vital it is to give back financially to the communities she has helped build.  She started her scholarship endowment fund at Duke while she was dean of the Law School and has continued to increase this fund annually.  Recently, she made a generous bequest in recognition of her 40th Duke Law reunion.  For Gann, there are two main reasons for supporting academic institutions.

“I think it’s important to give back intergenerationally,” she explains. “I had a wonderful scholarship as a law student at Duke and I’m personally grateful. Now, as a leader, I have seen how important it is to have the freedom to run meritocratic institutions where great students can come regardless of background. A school can never have enough financial aid to offer its students. It makes all the difference in the world for these fine institutions to have the ability to shape their classes with a need-blind eye.” 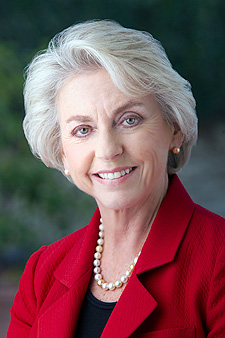