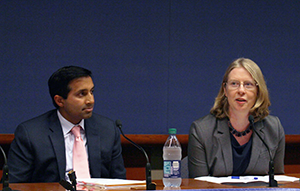 A Sept. 3 panel at the Law School considered the U.S. Supreme Court’s decision in Trump v. Hawaii, the so-called travel ban case, and its connections to Korematsu v. United States, an infamous case in which the Court upheld the exclusion of Japanese-Americans during World War II.

The panel consisted of Dean Kerry Abrams, a scholar of immigration law who co-authored an amicus brief submitted to the Court in Trump v. Hawaii, as well as Pratik Shah, co-head of the Supreme Court and appellate practice at Akin Gump, and Professor Eric Muller, an expert in the treatment of Japanese-Americans at UNC-Chapel Hill School of Law. Matthew Adler, the Richard A. Horvitz Professor of Law and Professor of Economics, Philosophy and Public Policy, moderated the discussion, which was co-sponsored by the American Constitution Society and the Asian Pacific American Law Students Association.

The travel ban, enacted by an executive order just days after President Trump’s inauguration, initially blocked entry into the United States from seven predominantly Muslim countries, causing chaos at airports around the country and drawing criticism from advocates for immigration and civil rights. The ban drew multiple legal challenges, and the Trump administration was forced to revise the policy twice in response.

Trump v. Hawaii, which considered the third version of the ban, was one of the most closely watched cases of the Supreme Court’s last term. In a ruling on June 26, a 5-4 majority reversed lower courts and said the president acted lawfully under his statutory authority to restrict immigration to protect national security.

“I don’t think the outcome of the case was really surprising to most of us involved in the litigation,” Abrams said. “There is such a broad power granted to both Congress and the president in regulating immigration law that it would have been unusual for the court to have deviated from offering a lot of deference to either Congress or the executive in these cases.”

The Court’s opinion also said the ban did not violate the Establishment Clause, which prohibits the government from favoring one religion over another, rejecting claims that statements made by the president before and after taking office represented animus against Muslims.

Critics of the travel ban had raised the specter of Korematsu, in which a majority had found the government’s policy of removing Americans of Japanese ancestry from the West Coast following the attack on Pearl Harbor did not violate the Constitution. The decision has long represented a stain on the Court’s reputation.

“If you were talking about a Supreme Court hall of shame, you would probably put Plessy, Dred Scott, and Korematsu in,” said Shah, who filed an amicus brief supporting challenges to the travel ban on behalf of the children of the plaintiffs in Korematsu and two other similar cases decided at the time. “It’s not a case that any Supreme Court justice wants to be associated with.”

In its opinion in Trump v. Hawaii, the Court rejected the Korematsu decision for the first time. But it also stated that the 1944 ruling “has nothing to do with this case.” Shah and his clients disagreed: “We thought there was no more compelling historical parallel than the Japanese-American incarceration cases and in particular Korematsu,” he said.

Abrams, who has written extensively on the history and constitutionality of immigration restrictions, said she did not think that the two cases were analogous, but that it was important to consider them both in the context of their times. For Korematsu, which she said “has become a symbol for much more than the case,” that includes the U.S. decision to drop atomic bombs on Japan as well as the acceptance of racial segregation and discrimination as consistent with the constitution.

“That case like others of that period has come to stand for a notion of race and racism that we’ve rejected as a society,” she said. “In this administration, we’ve seen further immigration actions that may ultimately cast the travel bans in a different light.”

Muller noted that the Court’s decision in the 1943 case Hirabayashi v. U.S., brought by a Japanese-American student at the University of Washington who violated a curfew and refused an order to relocate to an internment camp, was actually more troubling. And, he noted, it has yet to be overruled by the Court.

“The Hirabayashi case has always flown off the radar screen, a 9-0 decision that upheld a racial curfew,” Muller said. “Hirabayashi is still out there and it’s the more dangerous decision because it’s an approval of a much less draconian government action, a curfew compared to mass removal.”