Carrington, who presided over major expansions of the Law School's faculty, curriculum, and international programs as dean from 1978 to 1988, is remembered as a visionary and nurturing leader and prolific scholar engaged with law reform and professional responsibility. 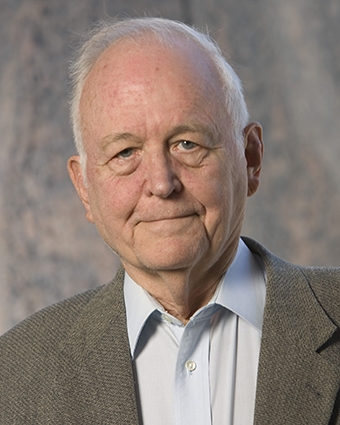 Paul D. Carrington, the Harry R. Chadwick, Sr., Professor Emeritus of Law and a former dean of Duke Law School, has died at the age of 90.

Carrington, a scholar of civil procedure, joined the Duke Law faculty as dean in 1978 and served a decade in the post, overseeing the establishment of many of the Law School’s signature initiatives and programs, including establishing expansive dual JD/MA opportunities for students and hiring an educationally diverse faculty that includes renowned scholars from other schools and departments of Duke University. His deanship also saw the launch of the international LLM program and international summer institutes in international and comparative law and development of other international connections for Duke law, beginning in 1980 with the establishment of scholarships for Chinese students.

“He was truly a transformative dean,” said James Cox, the Brainerd Currie Professor of Law. “Each of these programs has been nurtured and shaped by successive deans, but they were initiated by Paul and they remain at their core committed to the principles on which he sold them to the faculty. Among those principles are that a great law school needs to have a large foot in the international arena, that law is cultural and touches every corner of the university’s curriculum, the life and study of the law is about engagement, and learning excels when students are challenged with diverse perspectives and methodologies.”

Other of Carrington’s notable initiatives as dean were expanding opportunities for students to engage in legal scholarship through journals such as by establishing Duke Law as the editorial home for the Alaska Law Review, introducing a course on legal ethics into the curriculum, and launching the publication of Duke Law Magazine in 1982 — he served as editor of its inaugural issue. He is remembered by faculty for having been highly supportive of their scholarship and professional development and continually interested in improving legal education.

Carrington was “devoted not just to being the dean of this law school, but also devoted to, and concerned with, the law teaching profession as a whole,” said George Christie, the James B. Duke Professor Emeritus of Law, who called Carrington a dear friend of more than 50 years. Cox agreed: “Paul cared deeply about legal education and loved to discuss with his faculty the merits of what we were doing and should be doing.”

A Dallas native, Carrington received his undergraduate degree from the University of Texas in 1952 and his law degree from Harvard Law School in 1955. He began his academic career in 1957, after completing two years of military service (U.S. Army). Prior to joining the Duke Law faculty in 1978 he was a member of the law faculties at Wyoming, Indiana, Ohio State, and Michigan. He held visiting appointments at 10 other U.S. law schools and taught at five universities abroad.

Carrington was the author or editor of seven books and numerous symposia, and published more than 100 articles in academic journals on subjects including civil procedure, legal education contracts, criminal law, constitutional law, comparative law, and the history of the legal profession. His work was supported by the Ford, Guggenheim, Luce, and Rockefeller foundations.

During his academic career Carrington represented numerous individual clients on a pro bono basis in support of their claims to civil liberties and assisted in advancing claims by classes of plaintiffs. His engagement with law reform across diverse areas included participating in a successful effort to secure enactment of the Uniform Commercial Code in Wyoming, directing an American Bar Foundation study of the United States Courts of Appeal, and directing a study of legal education for the Association of American Law Schools. From 1973 to 1975, he served the Federal Judicial Center as vice chair of the Advisory Council on Appellate Justice, organizing the 1975 national conference on that subject. He also directed a program of law reform for the Supreme Court of Michigan.

From 1985 to 1993, Carrington served as Reporter to the Advisory Committee on Civil Rules of the Judicial Conference of the United States and was instrumental in effecting several reforms of those rules. His many other professional activities included directing a program on judicial independence and accountability for the American Bar Association from 1997 to 1999, organizing a national conference on that subject in 1999, and serving on the North Carolina Bar Association’s Committee on Judicial Independence. He also participated in organizing the group that drafted the Model Fair Bargain Act enacted in New Mexico in 2000 to constrain the misuse of arbitration clauses in standard form contracts unread by the parties; that text has been supported for enactment in other states by diverse groups.

A transformative dean, a nurturing leader

As dean, Carrington “arrived at a very good law school and made it so much better,” said Pamela Gann ’73, who succeeded him as dean. She noted his close attention to faculty hiring and support of faculty scholarship, his addition of women to the faculty, and his creation of a more interdisciplinary faculty through joint appointments within Duke University, including such scholars as the renowned historian John Hope Franklin. Combined with his creation of programs that allowed JD students to concurrently pursue graduate degrees from other departments, he effectively “leveraged the excellence of Duke University,” she said. Gann also praised his internationalization of the Law School and his prescience in seeing the importance of legal education for Chinese students, whom he actively identified and recruited for admission to the JD program.

“Yet he was ever committed to the idea that important law schools and their faculty and scholarship should be linked to the betterment of law and policy, the legal profession, and the judiciary,” said Gann, who served as dean until 1999, when she became president of Claremont-McKenna College. “I always appreciated his commitment to creating this positive balance between scholarship within the academy and outreach to the professional importance of the practice of law and our legal institutions.”

Added Richard Schmalbeck, the Simpson Thacher & Bartlett Professor of Law and one of Carrington’s early faculty recruits: “His imagination and tireless efforts made such a difference to the school.”

Gregarious and highly collegial, Carrington promoted strong bonds among the faculty, Cox said. “Hardly a week passed without Paul walking the hallways looking for a very large group to go for lunch — these impromptu gatherings are among my most treasured memories of Duke. He also would drop into your office to talk about anything, but usually about your work or something he had read related to your subject. He saw strength in each of us and was extremely supportive of our development — he cared about our careers.”

David F. Cavers Professor of Law Deborah DeMott, a faculty member since 1975 who was untenured when Carrington arrived at Duke, credits him with helping her professional maturation in various ways, such as by asking her to chair the Faculty Appointments Committee and talk to the Board of Visitors about her first scholarly paper. “But I remember Paul for so much more,” she said. “He was a champion raconteur, ranging widely across incidents and observations throughout his life. He owed much, I think, to the variety of experiences he’d had and the people he’d encountered along the way.”

Katharine Bartlett, the A. Kenneth Pye Professor Emerita of Law who served as dean from 2000 to 2007, said she owes her career at Duke to Carrington. “He took a chance on me in 1979 when he asked me to teach a civil litigation clinic, and from there, my position grew even though I didn’t have the traditional qualification of a faculty hire,” she said. “Over the years, I’ve admired Paul greatly for his commitment to legal education, scholarship, and faculty mentorship. He was a kind and generous man whose basic goodness touched many at Duke and around the world. We will miss him greatly.”

Xiqing Gao ’86, the second student from China to study at Duke Law, counts himself among those whose lives Carrington transformed. “Without his vision, courage and persistence, I would never have been able to get the kind of hard-core legal education from Duke Law,” said Gao, the Yutong Cheng Professor of Law at Tsinghua University Law School and former vice chairman, president, and chief investment officer of China Investment Corporation. “He worked hard throughout his stint as the dean to recruit the Chinese students and find various ways to support them. He constantly talked to the major law firms and Duke Law alumni for their support of the Chinese students both in terms of financial aid and clerkship/ job opportunities.

“Paul started a new era at Duke Law School, as far as the Chinese legal education is considered,” said Gao, a Duke University trustee. “Without him, Duke's name brand in China would not be where it is today. More importantly, many aspects of the Chinese legal system and law practices can be attributable to the great educational experiences many of us received from Duke Law School.”

Reforming the Supreme Court: Term Limits for Justices (Carolina Academic Press, 2006), a collection of essays by leading academics that examine the benefits and detriments of term limits, arose from a Program in Public Law conference on Supreme Court term limits that Carrington and his co-editor, Roger Cramton, convened at Duke Law in 2005. Through 200 short essays in American Lawyer: Public Servants and the Development of A Nation (ABA Publishing, 2012), Carrington chronicled lawyers’ engagement in designing and developing American democratic government and law from the nation’s founding to the end of the 20th century. He also noted their missteps, from the perpetuation, by some, of slavery, to the American Bar Association’s demand for “loyalty oaths” during the McCarthy era, to Watergate.

Carrington’s last book was his 2016 memoir, A Lucky Lawyer’s Life.

“Paul was a gifted writer and an outstanding scholar,” said Cox. “Indeed, my colleague Jamie Boyle best summed up this characteristic by observing, ‘If Carrington were sentenced to a dungeon for the rest of his life, his first action upon entering the cell would be to scramble for pen and paper.’ This is so true of Paul’s possessing a life of the mind, but it also tells us what we who knew him came to appreciate, he had a deep message to each of us that he knew would make us better. I believe he has done so.”

Gifts in Carrington’s memory may be made to the Paul D. Carrington Dean’s Innovation Fund through Duke’s secure giving site. The Carrington Fund supports expenses associated with the addition of faculty, innovative initiatives, and staff or student enrichment at Duke Law School.