The de Borda Institute is a Northern Ireland-based NGO, which aims to promote the use of inclusive voting procedures on all contentious questions of social choice. Mr. Emerson, the director of the institute, is a very prominent proponent of the Borda electoral system, a preferential system he has advocated for societies such as Bosnia.

The methodology he promotes is the Borda count or rather, its modernized form, the Modified Borda Count (MBC) or Borda preferendum; (it is also known as consensus voting). It applies specifically to decision-making, be it for the electorate in regional/national polls, for their elected representatives in councils and parliaments, for members of a local community group, a company board, a co-operative, and so on. More information about the institute is available at http://www.deborda.org.

He will be available to meet with interested faculty on February 19. Please RSVP for the luncheon meeting and let us know if you would like a private meeting as well. To RSVP or for more information, contact Neylân Gürel.

--------------------------------
Abstract
Because they are so very adversarial, Western democratic norms have often exacerbated ethnic and other internal disputes. A more consensual polity could not only help to resolve any violent conflicts, but also prevent them from (re-)starting.

Admittedly, and despite its limitations, majority rule is a good thing. Paradoxical as it may sound, however, the instrument of majority rule should not be the majority vote for the latter cannot facilitate the identification of the common will. Instead, it allows many practitioners to reduce a complex problem of social choice into a (supposedly) simple dichotomy. Thus the question asked is invariably closed; the subject under debate is often distorted; the resulting ballot paper cannot reflect the full choice of options; and therefore the outcome of any subsequent vote is often hopelessly misleading. So, unless it happens by chance, the outcome of a majority vote cannot be the will of the people, or even the will of the majority. Indeed, the outcome is often the will, only of he who wrote the question. He is sometimes an extremist. And the majority vote can be a cause of war.

In conflict resolution work, in contrast, mediators rely on open questions. What’s more, the very process of mediation is designed to find, from a range of options, that which is most acceptable to everyone, i.e., the best possible compromise.

If "democracy" is to be a vital part of our world, then, inter alia, the majority rule should be declared to be inadequate if, in its application, a) parliaments then divide into two and, especially on controversial topics, take decisions by majority vote; and/or worse, b) societies divide into two, so to fall, often in referendums, either side of ethno-religious chasms. A better methodology would allow parliament and/or society to come to a consensus or at least the best possible compromise. 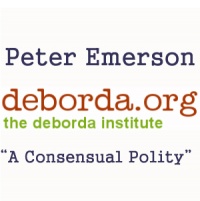