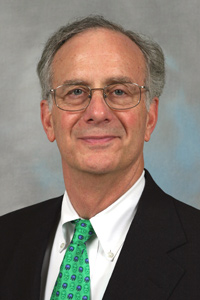 “I'm very interested in collegiality between prosecutors and defense lawyers. You treat each other as professionals. That allows justice to be done.”

Speaking two weeks before the election to choose his successor as dis­trict attorney of Mecklenburg County, N.C., Peter Gilchrist offers this advice for aspir­ing politicians: “If you can choose to run with or without opposition, do it without.”

Gilchrist, who retired Dec. 31, never faced an opponent after winning the posi­tion in a three-way Democratic primary in 1974. He won with the help of a Duke Law classmate and friend, Joe Warren, a Republican, who served as his campaign manager. While he says he decided to run after serving as an assistant solicitor for four years simply to “keep my job” during a time of transition, the Charlotte native demurs from speculating about why he remained unopposed for so long.

“Maybe all the smart lawyers think there’s got to be a better way to earn a living,” he says, laughing. Why did he choose to remain D.A. of North Carolina’s most populous county for 35 years, ignoring all other offers that came his way? “There is a psychic satis­faction that comes with it — a feeling of sat­isfaction that I think sustains a lot of people. And for some of us, it’s more important than the money. I really think we are doing very, very important work.”


It is work that “I sort of backed into,” Gilchrist admits, noting that he entered law school assuming he was bound for a busi­ness career, possibly in his family’s chemi­cal business, which was later sold. “I never really thought I would practice law and certainly had no idea that I would end up in criminal law, much less as a prosecutor. I never even took Evidence.”

Having enjoyed his corporate and tax law classes at Duke, he returned to Charlotte and joined accounting giant Arthur Andersen as a tax specialist, eventually becoming a certified public accountant. But in the late 1960s, he found his curiosity piqued by an article about a county recorder’s court in Mecklenburg County, newly established to deal with juvenile, domestic violence, and “criminal non-support” cases.

“I wasn’t looking for a job,” he says. “I just decided to talk to the judge about what the court did.” At the end of their meeting, the judge offered him the job of court solicitor — its only attorney. Gilchrist surprised him­self by accepting it, even though it meant taking a deep pay cut.

“It was a whole lot more interesting hearing the problems folks could get entangled with in personal relationships than trying to save somebody from paying income taxes,” he says, adding that the learning curve was steep.

Still, Gilchrist moved on when the North Carolina government took oversight of all courts in 1969. He spent that year’s leg­islative session lobbying the N.C. General Assembly on behalf of the Charlotte Chamber of Commerce to allow mixed drinks in res­taurants, then worked briefly as the chief financial officer for a Winston-Salem-based developer. Returning to Charlotte in the early 1970s, he became a prosecutor, starting as an assistant solicitor in the district courts, and quickly moving to the superior courts where he tried felony jury trials.

The Office of the District Attorney was a bare-bones operation when Gilchrist took over on Jan. 1, 1975, with about a dozen pros­ecutors, a few secretaries, minimal equip­ment, and “little help” from the police depart­ment. “Even as an assistant trying felony cases in superior court, I knew there had to be a better way to do what we were doing,” he says. He often paid his own way to travel to other jurisdictions to observe their manage­ment practices.

“I’ve spent a career trying to modernize the office and trying to compensate with good management practices for the lack of funding and understaffing the office has always dealt with,” he says. His CPA training helped, and over the years he has advised many prosecu­tors’ offices and court systems around the country on management practices and other aspects of criminal justice administration.

His office expanded exponentially in size and volume of filings over the years, as Charlotte and its surrounding communities underwent explosive growth; by the time he retired, Gilchrist oversaw almost 80 assis­tant district attorneys and 60 support staff, who handled more than 230,000 filings per year, including more than 10,000 felonies. Establishing specialized teams to prosecute different classes of offenses and offenders — such as drug and white-collar criminal offenses, for instance — was just one of Gilchrist’s innovations to ensure efficiency in his office.

Collegiality as a hallmark of professionalism


Although he stopped trying cases after sever­al terms in office, Gilchrist remained closely involved with decision making and legal strategy in individual cases and more broadly, when there was the potential to set useful precedent on appeal. He is proud of his record in working with the Attorney General’s Office and with members of the defense bar in his county, calling this collegiality one of the hallmarks of his administration. In 2008, the Criminal Law Section of the North Carolina Bar Association honored Gilchrist with its inaugural award for prosecutorial profession­alism, which also bears his name.

“It has always been very important to me to recognize the role of the district attorney,” he says. “I represent the people. And the people certainly don’t want innocent folks convicted of crimes. And I’m very interested in collegiality between prosecutors and defense lawyers. You treat each other as pro­fessionals. That allows justice to be done.

“We don’t cut corners in our prosecutions, either,” he adds. “We did open-file discovery before it was mandated by statute.”

Satisfied with his career choice through his last day in office, Gilchrist declares himself retired from criminal law. “I don’t intend to keep my hand in. I’ve had a won­derful career. I’ve enjoyed it and now I want to try to stretch my horizons.” He intends to take time to “decompress” and enjoy the out­doors before he decides on a new direction. One thing is certain: his future travels will take him back to Duke to reunite regularly with his law school classmates.

“We were right at about 100 when we were there, and I got to know many of my classmates,” he says. “I’ve enjoyed coming back to reunions. We seem to pick up almost where we left off in law school. That’s really been a pleasure for me.”