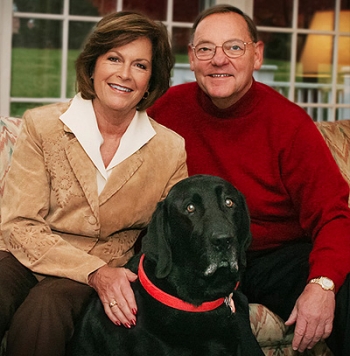 In their hometown of Chicago, John and Rita Canning are renowned for the transformative impact of their philanthropy. They help women escape domestic abuse through their support of transitional housing and educational programming. They provide 100 scholarships each year to send inner-city children to high-performing parochial schools. And they fund undergraduate and community college scholarships for students who have surmounted hurdles posed by socioeconomic hardship and domestic violence to help secure their future success.

With their recent gift to Duke Law, the Cannings are giving students who have faced early challenges a chance to go to law school.

The Cannings have pledged $1 million to Duke Law School — to be paid in $100,000 installments over 10 years — to fund need-based scholarships, fellowships, and other forms of financial support to help deserving students and recent graduates reach their potential and realize their goals. And a generous bequest will ensure the program will continue beyond their lives.

“John and Rita Canning think strategically about their philanthropy,” said Dean David F. Levi. “Their approach in different areas of need is to try to help individuals surmount immediate challenges and build independent lives that achieve their dreams. With this gift to Duke Law School, they will be opening doors to future leaders with the vision and the tools to effect lasting change in their communities.”

In a telephone interview from his office at Madison Dearborn Partners, the private equity firm he co-founded in 1992, John Canning joked that it was Levi’s “relentless” outreach that spurred the gift to Duke Law. “He finally figured out how to get to me,” Canning said. “And to his credit, he structured something that I could get enthused about.”

Canning said that he and his wife long ago identified the issues and causes that “we really got energized about” — helping at-risk, inner-city children for him, and helping women and children facing domestic violence for her.

When Rita Canning discovered, in the early ’90s, that in spite of enormous need there were no domestic violence shelters where she could volunteer near her home, she decided to build one. Joining the board of WINGS (Women in Need Growing Stronger), which she now chairs, she has helped build the first safe house in Chicago’s northwest suburbs, established other transitional housing for abused women and their children, tripled WINGS’ services and programs, and raised more than $10 million for the cause. The Cannings’ scholarship fund in the Women’s Program at Harper College in Chicago is directed to women with histories of domestic violence.

“We find strength in the women we serve,” Rita Canning wrote last December in an essay in the Chicago Sun-Times, sharing the story of a WINGS alumna who fled her abusive husband with her children after her 4-year-old son “told his father to hit his mother because she was being bad.” The woman is now happily remarried after graduating from the WINGS program, Canning wrote. “The successes and challenges of WINGS’ women like these inspire and motivate me.”

The couple’s engagement with inner-city schools and students began in 1994 after they read about a tragedy in Chicago’s notorious — now demolished — Ida B. Wells housing projects. Two preteen gang members dropped a 5-year-old boy out of a 14th-floor window after the child refused to steal candy for them. Moved to aid the victim’s family or community, the Cannings were directed to the child’s South Side Catholic school, where the nuns suggested offering scholarship support to several students who could not afford the tuition. The Cannings immediately agreed, later meeting the beneficiaries at a party initiated by those children and their families. “We became very close with those students,” said John Canning, adding that one of them, a third-grader in 1994, had just been in to visit him a day earlier.

The couple quickly realized that funding elementary school scholarships “would not accomplish anything” unless the recipients could move on to good high schools, which were utterly lacking at the time in the public school system, said Canning. “Although I’m not Catholic — and the cardinal calls me ‘the heathen’ — I realized that the only alternatives were the Catholic schools.” They immediately started funding scholarships, finding the Catholic high schools, like the elementary schools, both structured and safe, and the students primed to succeed. “Because you pay tuition and because you have to go through an application process to get in, you usually have a child who has parental support at home and is with ‘like’ children,” he said.

The Big Shoulders Fund, an organization established to support Catholic schools in Chicago’s neediest areas, soon contacted him, and he found an enduring passion in its mission to deliver highquality, values-based education in a secure environment to children from all religious backgrounds. As co-chairman of the organization since 2004, he has helped raise over $250 million for its schools that serve almost 25,000 students, the vast majority of whom are members of minority groups and come from families living below the poverty level. And the vast majority of them now succeed in school.

“We have data now that indicates 92 percent of our scholarship recipients go to college,” said Canning. The organization is now tracking their graduates’ college success.

Outcomes are key to Canning, who traces much of the success of Big Shoulders Fund schools to the emphasis they put on enriching the entire student experience in and out of the classroom, including with travel. “We’ve tried to bring in life experiences for the kids that they otherwise wouldn’t have, rather than just concentrating on the curriculum.” On one recent outing — an annual event — he hosted 18 high school girls at a Chicago Bulls game. “I get so much fun out of these kids,” he said, noting that he and his wife meet and get to know all the scholarship recipients they support in Chicago schools and at Harper College, DePaul University, and Northwestern University.

While the Big Shoulders Fund is, perhaps, closest to John Canning’s heart and WINGS is closest to his wife’s, their community and philanthropic leadership extends to a broad range of Chicago-based cultural, medical, educational, and community organizations and institutions. John Canning became chairman of the Museum of Science and Industry last June, becoming the only person to also have chaired the Field Museum. A former director and chairman of the Federal Reserve Bank of Chicago and the Chicago Community Trust, he currently serves on multiple corporate boards, including that of the Milwaukee Brewers Baseball Club, of which he is a 12 percent owner; he also co-owns five minor-league baseball teams. Rita Canning also serves in multiple volunteer leadership posts, including as a trustee at Harper College.

Having long kept Chicago as the epicenter of their philanthropic efforts, why extend support to Duke Law students?

Although he jokes about the dean’s persistence, John Canning expresses his deep gratitude to his alma mater. “Duke provided me with credentials and the opportunity to get my first job that ultimately elevated me to where I am,” he said.

Canning, who “never really wanted to be a lawyer,” joined The First National Bank of Chicago following his Duke Law graduation, at a time when banks were just beginning to move into non-banking activities. Assigned to help establish First Chicago Venture Capital, he became president and CEO of the subsidiary in 1980. He founded Madison Dearborn Partners with a group of First Chicago colleagues in 1992, and served as its CEO until 2007 when he became chairman. He remains involved in day-to-day operations.

“I never really enjoyed the ‘law school’ part of law school,” said Canning, who always envisioned a career in business, “but I actually enjoyed being a lawyer. That was kind of a surprise to me. I enjoyed doing the deals.”

With their gift to Duke Law, all parties are sure they’ve made a good one, and that future generations of Canning Scholars at Duke Law will make the same kind of contributions to their communities as John and Rita Canning have made to theirs.