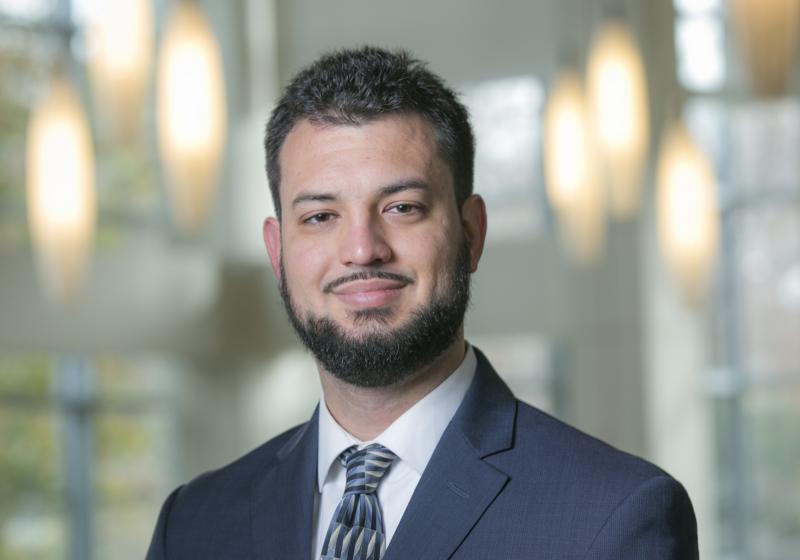 Luis Pinto ’18 has received a Clifton Everett Fellowship from Legal Aid of North Carolina (LANC) to serve low-income clients in Ahoskie, N.C., as a staff attorney.

Stella Boswell, assistant dean for Public Interest and Career Development, calls Pinto exceptionally deserving of the yearlong fellowship: “Luis is fully committed to public service, and has been a pro bono superstar here at Duke Law.”

Under the supervision of licensed attorneys, Pinto has offered pro bono service to clients through the Veteran’s Assistance Project (VAP), the Bull City Standdown, and Lawyer on the Line, and has done Southern Justice Spring Break volunteer work in Mississippi and Louisiana. He worked for LANC in Wilson, N.C., after his first year at Duke Law and at the Mecklenburg County Public Defender’s office after his second, held externships with the City and County of Durham in consecutive semesters as a 2L, and is currently an advanced student in the Civil Justice Clinic.  He has also provided free tax help through Volunteer Income Tax Assistance (VITA).

“Additionally, he eagerly serves on the many panels for Lead Week, Admitted Students Weekend and pro bono information sessions,” said Kim Burrucker, director of the Office of Public Interest and Pro Bono. “He is the epitome of every cliché regarding selflessness and altruism.”

Saying that he is honored to receive the Everett fellowship, Pinto was self-effacing about his pro bono and public interest service: “I look at people who have a laser focus on criminal law or securities law and compared to them I guess I’m a little unfocused. I want to help people, and I’ve just tried a lot of the different ways you can do that as a law student.”

An Army veteran and graduate of the University of Miami where he majored in political science, Pinto came to Duke Law with a public interest career in mind. “I realized that the legal system could help people and that it could also ruin people’s lives, especially those without resources,” he said. He quickly signed up for VAP, VITA, Lawyer on the Line and the annual Southern Justice Spring Break trip —“all the extracurriculars that allow you interact with people, to get to know the law, and to apply it in a real setting.”

He found the interplay between the legal issues he faced in his volunteer service and those he was learning about in his first-year classes to be instructive. “With Lawyer on the Line, for instance, I would hear the broad principle in class, and then determine how those principles were specifically codified in North Carolina law and then I could apply it to a problem faced by a client, so there was concrete reinforcement,” he said. Lawyer on the Line student volunteers interview callers facing legal problems, conduct research, and then offer concise answers to the legal questions raised under the supervision of LANC attorneys.

Attempting to get a Vietnam veteran benefits relating to a war injury during his first year with VAP, gave Pinto an opportunity to apply skills he had learned through his Legal Analysis, Research and Writing (LARW) curriculum: “During the research part of LARW, we had learned about using Hein Online for looking up old laws and regulations,” he said. “In that case I had to go see what the relevant statutes and regulations were 30 years ago when the veteran first applied to the VA for benefits.” Pinto said his three-year Army service, during which he was briefly deployed to Kandahar Airfield in Afghanistan as a transportation officer, helped him relate easily to the veterans he saw as clients through VAP, which he co-directed in his second year. “The military is full of acronyms and things that don’t make sense to outsiders,” he said. “I didn’t have to deal with that learning curve of trying to figure out what all these random terms mean, what the ranks are, what the military structure is or what daily life is like.”

Pinto recalled times when the public interest work informed his class work, as well, he said. He spent his first year Southern Justice Spring Break trip at the Mississippi Center for Justice in Biloxi at researching housing discrimination issues and writing a complaint to the U.S. Department of Housing and Urban Development. “The case involved some issues that came up in class after I got back to Durham,” he said. “While that’s more common in the later years of law school, For a 1L, that’s a rare experience.”

“Being in in misdemeanor court with new clients every day was a different sort of challenge,” he said. "If civil law is a little like chess, with many steps and a lot of advance planning, misdemeanor criminal law is like checkers: Everything moves fast, and there’s a new game every day. You interview your client, interview the police officer, interview a witness if there is one, make a good, quick judgment, then talk to the DA. If you can get a dismissal or compliance for dismissal you’re often quickly off to the next case.”

Pinto gained more courtroom experience during his fall semester in the Civil Justice Clinic, when he and classmate Blair Mason ’18 briefed a motion and tried an administrative hearing on behalf of a suspended health care worker seeking reinstatement of her employment status. To refute a state investigator’s claim that their client had neglected patients at a mental health facility, Pinto and Mason reviewed hours of videotape evidence from the facility, which they successfully moved to exclude from the hearing, and then presented her case in a daylong December hearing. Clinical Professor Charles Holton ’73, who directs the clinic and supervised their work on the case, praised their advocacy.

Pinto said he expects to draw on much of his public interest experience during his fellowship in Ahoskie, a small town in eastern North Carolina.

“Legal Aid serves a low income population, people who don’t usually have access to justice,” he said. “And Ahoskie is a very rural area, so it’s double-stacking access to justice issues. They are poor and they are geographically isolated, so they have additional problems dealing with the legal system.” He recalled one client he had when he worked with LANC in Wilson who missed a meeting because he had no gas money or alternative transportation. “I think physical access, meaning the ability to travel longer distances to get to court or meetings when there is no public transportation and you may not have a car or gas money, adds another layer of difficulty for people in places like that.”

Pinto’s experience and outlook make him a perfect fit for the Everett Fellowship, said Burrucker. “But if there were a way to keep him a law student forever, or at least as long as I am here, I would.”