The book focuses on the increasing privatization of military functions, foreign aid and diplomacy, the ways in which such privatization affects human-rights law, and the variety of mechanisms that might be used to create greater accountability over private actors working abroad under government contracts.

Over the past decade states have increasingly shifted the burden of their foreign policy functions to private contractors. These contractors do more than just act as surrogate soldiers; they work in many different areas of the military—giving tactical, operational, and logistical support. Laura Dickinson will discuss how the role traditionally performed by the Judge Advocate General (JAG) can be filled and what other measures may be instituted to promote accountability in the new paradigm. 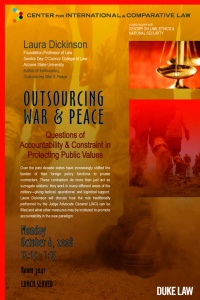