The longtime Duke Law faculty member and leader in the national innocence movement will address members of the Class of 2021 at their graduation event on May 15. 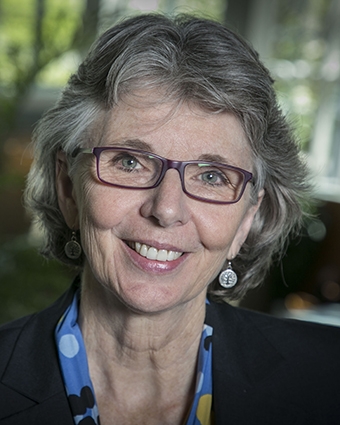 Charles S. Rhyne Clinical Professor of Law Theresa A. Newman ’88, co-founder and co-director of the Wrongful Convictions Clinic and a leader in the national innocence movement, will address the Class of 2021 at their Convocation ceremony on May 15.

Newman and Professor James E. Coleman, Jr., established the Wrongful Convictions Clinic in 2008 to investigate claims of innocence made by North Carolina inmates convicted of felonies. Under the supervision of clinic faculty, students assist with developing clients’ claims and, when necessary, pursuing relief in state or federal court. Ten of the clinic’s clients have been exonerated of crimes they did not commit and released from prison, and four have been freed in just the last two years: Willie Shaw, Ronnie Long, Dontae Sharpe, and Ray Finch, who collectively had served 118 years behind bars.

A longtime member of the Duke Law faculty, Newman also serves as associate director of the Center for Criminal Justice and Professional Responsibility and faculty adviser to Duke’s chapter of the Innocence Project, which she and Coleman, the John S. Bradway Professor of the Practice of Law, also helped establish. She plans to retire at the end of June.

“As her students, colleagues, and clients can attest, Theresa Newman is a tireless champion for justice,” said Dean Kerry Abrams. “She has been a treasured member of the Duke Law community since arriving here as a student in 1985 and has had a remarkable career since as an advocate and educator. I’m thrilled that our graduating students will have the opportunity to hear from this distinguished alumna as they embark on their own lives in the law.”

Convocation will begin at 10:00 a.m. in Cameron Indoor Stadium and is open to graduating students only. The event will be livestreamed on the Law School’s YouTube channel. In addition to Newman, graduating students will hear from Abrams, student speakers chosen by the JD and LLM classes, and alumni appearing on video.

After earning her law degree at Duke, Newman clerked for the Honorable J. Dickson Phillips, Jr., on the U.S. Court of Appeals for the Fourth Circuit. Following her clerkship, she practiced in the civil litigation group of the Womble law firm in Raleigh.

She returned to Duke in 1990 to serve as general editor of Law & Contemporary Problems and the Alaska Law Review and later as advisor to all of the Law School’s student-edited journals. She went on to teach Legal Analysis, Research, and Writing and Legal Ethics and serve as director of legal writing.

From 1999 to 2008, Newman served as associate dean for academic affairs. She was awarded the Charles S. Rhyne Clinical Professorship in 2018.

Newman has twice been honored by the Law School’s Law Alumni Association. She received the Young Alumni Award in 2003, and she shared the A. Kenneth Pye Award for Excellence in Education with Coleman in 2018.

Newman was a founding member of the board of the international Innocence Network, an affiliation of more than sixty-five organizations dedicated to providing pro bono legal and investigative services to individuals seeking to prove their innocence and working to redress the causes of wrongful convictions. She was the group’s inaugural co-president and later served as its president, helping set standards and ethical guidelines for innocence clinics across the country.