Professor William Twining to Give the 7th Annual Bernstein Lecture


Professor William Twining is Quain Professor of Jurisprudence Emeritus, University College of London and a regular Visiting Professor at the University of Miami Law School. He has written extensively on jurisprudence, evidence, globalization and law, and law in Africa. His books include Karl Llewellyn and the Realist Movement, How to Do Things with Rules (with David Miers), Globalisation and Legal Theory, The Great Juristic Bazaar, and most recently General Jurisprudence (2009). He is a Fellow of the British Academy and a foreign member of the American Academy of Arts and Sciences.

Abstract
Legal pluralism has become an important, sometimes contentious, focus of attention in several fields, including sociology of law, international law, comparative law, and Islamic law. This lecture sets out to demystify the topic by exploring the relationship between legal pluralism, normative pluralism, and general normative theory.

Information about the Bernstein Lecture, including previous speakers and webcasts, can be found here. 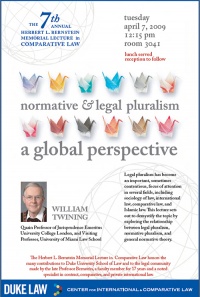 Professor William Twining will give the 7th Annual Bernstein Lecture