As one of few Kenyan lawyers to specialize in environmental law, Bosire pursued Duke’s Certificate in Environmental Law during his LLM studies. 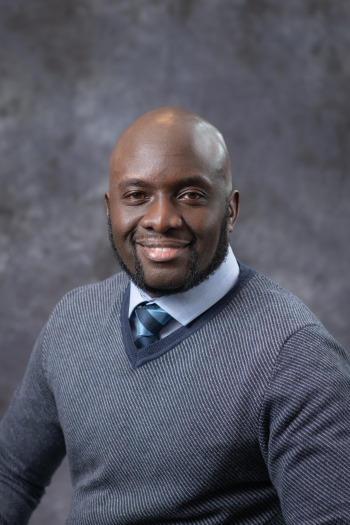 Olonyi Bosire grew up in Kenya with a love of greenspace and wildlife and an appreciation that he says is taught to every schoolchild of the importance of the country’s natural wonders, such as the role they play in its economy through tourism. Once he decided to study law it seemed natural, he says, to make environmental conservation his focus.

Olonyi (who asked that his given name be used) arrived at Duke Law in 2019 to pursue the Certificate in Environmental Law along with his LLM after practicing exclusively in that field for five years, one of just a handful of Kenyan lawyers who do so. He worked on the protection of endangered species and forests, assisted with the prosecution of such environmental crimes as poaching, illegal logging, and wildlife trafficking, and engaged in law and policy matters, such as drafting amendments to wildlife regulations.

Duke’s reputation as one of the leading institutions for environmental science as well as law made it a natural choice for his LLM, Olonyi says. Spending his second semester in the Environmental Law and Policy Clinic was a highlight.

“It was very rewarding in terms of experiencing the U.S. legal atmosphere and seeing how things work, how the laws are applied, and getting to know some of the organizations and agencies in the environmental field,” he says. “It also was very informative in terms of learning to apply the theory I had studied in Environmental Law in my first semester.” He greatly enjoyed collaborating with clinic teammates from Duke’s Nicholas School of the Environment who make up half of the clinic’s enrollment, he adds. “I’m used to having the legal people handle legal matters with no input from anyone else, but I found gaining the perspective of the Nicholas students enriched the process overall.”

Olonyi’s primary clinic assignment involved conducting research on the environmental impact of a high-voltage transmission line planned for the James River Basin in Virginia. The project, currently under study by the U.S. Army Corps of Engineers, carries various environmental threats, including to such endangered species as the Atlantic and Shortnosed sturgeons native to the area where the transmission towers would be built, he says. The same transmission towers also threaten the historic character of Jamestown, the first permanent English settlement in the Americas.

Olonyi built on his prior experience to research the use of international instruments that could add “an extra layer of protection” against development that would degrade the area. Such instruments had been effectively used in Kenya to discourage development of a coal plant that environmentally and economically threatened a historic Swahili coastal settlement, noting that the instrument brought international attention to what was going on. And his clinic research showed that in Brazil, a port where slaves were introduced to the country, received recognition through international designation.

Clinical Professor Michelle Nowlin JD/MA ’92, co-director of the Environmental Law and Policy Clinic, says Olonyi made unique contributions both to the course and the project. “His comparative observations about the practice of environmental law in Kenya were instructive for everyone in the course, and his advice to enhance protections for Jamestown and the National Colonial Historic Parkway through international legal instruments was both novel and edifying.

“As Olonyi argued, the region is about more than the founding of the U.S. — it also embodies the story of globalization and colonialism. And in Jamestown and the surrounding agricultural landscape are the echoes of the Atlantic slave trade that we continue to reckon with as a country. By providing this broader historic lens, Olonyi enriched our understanding of the damaging impacts from the proposed project.”

While the Covid-19 shutdown precluded Olonyi from visiting the project site, his clinic work yielded comparative insights he says could be useful to his future practice. The idea to use the Freedom of Information Act (FOIA) to request documents from the National Parks Service about the Army Corps’ study and researching the FOIA appeals process was a key one.

“Freedom to information just became a right in Kenya in 2010, so it’s a very young area of the law and one that is still developing,” he says. “It was interesting to see the challenges people have had here in terms of getting information, the jurisprudence that has developed in terms of which information is allowed, what is not allowed, what seems to work and what doesn’t, and the rights that citizens have to get information.” Olonyi calls it “mind-blowing” that non-citizens can make FOIA requests. “It opens up a future view of how things can work and how the legal field in Kenya might develop and people might frame challenges.”

Olonyi’s inclusion in Duke Law’s delegation to the annual Salzburg Cutler Fellows Program in Washington, D.C., in February, was another highlight of his LLM year. The Salzburg Cutler Fellows Program gives law students opportunities to learn from and be mentored by prominent legal professionals, public servants, and leaders in the fields of international law and public service and to see how international law and legal systems can tackle a range of global challenges.

“Meeting students from the other law schools [and] comparing experiences with them opened up a whole other network to me, which was really nice, and it was rewarding to meet professors from other universities as well as top American lawyers and legislators,” he says.

Olonyi is currently clerking with the Institute of Governance and Sustainable Development in Washington, D.C., an NGO founded and led by Durwood Zaelke ’72 that promotes just and sustainable societies and protects the environment by advancing the understanding, development, and implementation of effective and accountable systems of governance and sustainable development. Among his projects focused on climate change and other matters of environmental law, policy, and justice is one that hits close to home: the problem of environmental dumping in Africa.

“The focus has been on dumping into Africa of low efficieny second-hand or new but sub-standard air conditioners and refrigerators that do not meet minimum energy perfomance standards,” he says. “Such products often use obsolete refrigerants with a high global warming potential.”

Olonyi is likely to return to practice in Kenya after his clerkship ends, but hopes someday to return to Duke Law to pursue his SJD.