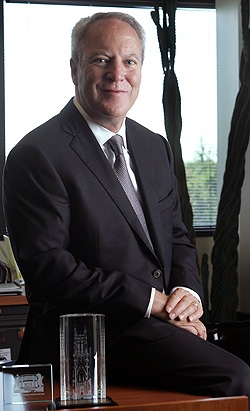 Richard Horvitz ’78 believes in the importance of public and constitutional law, and he believes in Duke Law School’s importance as an institution. He has worked to preserve both. His continued philanthropy has served as the underpinning for the Law School’s Program in Public Law, which he has underwritten for more than a decade.

“Over the years, Rick has had a tremendous impact on the Law School, particularly in the area of public law, which is one of our great strengths. His vision for the robust study and discussion of public law issues and debates is invigorating,” says Dean David F. Levi. “His sustained commitment to the Law School, even during difﬁcult economic times, is a testament to the loyalty that Duke Law alumni feel because of the excellence of the education they received here.”

Professor Neil S. Siegel, co-director of the Program in Public Law and a scholar of constitutional law and the federal courts, also credits Horvitz with the program’s evolution. “I recently told David Levi that the Program in Public Law has become part of the very institutional identity and architecture of the Law School, and that it’s hard for me to imagine this place without it. It’s not just the tangible resources, but all the opportunities for productive planning and exchanges with colleagues, students, and members of the legal profession. Without Rick Horvitz, I don’t see how there would be a Program in Public Law. He has made all of this possible.”

Horvitz recently added to his longstanding philanthropic commitment to the Law School by pledging his continued ﬁnancial support of the Program in Public Law and the Horvitz Professorship.

Horvitz lives in Cleveland with his wife, Erica HartmanHorvitz, and is chairman of Moreland Management Company. Despite geographic and professional distance — he has not practiced law since 1980 — Horvitz remains emotionally invested in Duke Law School and in the law generally.

“I think that the law, especially constitutional law, particularly for a person like myself who’s not a practicing lawyer, serves as kind of the lynchpin for how the public perceives law,” Horvitz says. “To me, an understanding and discussion of constitutional law in the academy and the more general public is highly important.”

Encouraging understanding of public law is especially important as the public discourse is overwhelmed by politicians from both parties who trafﬁc in a kind of shallow and cynical rhetoric that leads to a misunderstanding of the Constitution, Horvitz says. “I think a lot of people take it for granted, and some look at the Constitution as something to be gamed to achieve whatever political result they deem desirable. I look at it more as the founding principles of the country. There are differences of opinion about what methodology people use to interpret it, but the important thing is to take it seriously as a document.”

In addition to underwriting the Program in Public Law since 1998, Horvitz has endowed a professorship in law and public policy studies, held by Curtis A. Bradley; started the Fund for Faculty Excellence; and funded the Horvitz Public Law Fellowship, which supports public lawrelated summer positions for ﬁrst- and second-year students. He also created “Marcy’s Garden,” the lawn and garden area along the front of the Law School, named in honor of his late ﬁrst wife.

Horvitz says he’s proud of all the Program in Public Law initiatives, but he thinks the Law School derives special beneﬁt from the Lives in the Law speaker series that has brought, among others, Supreme Court Justices Samuel A. Alito, Stephen G. Breyer, Antonin Scalia, Ruth Bader Ginsburg, Sandra Day O’Connor, and former Chief Justice William Rehnquist to the Law School to speak about their legal careers.

“I think it’s enlightening for the students but also good for the justices to come down and see how great the school is,” Horvitz says.

The Horvitz Public Law Fellowship, provided to students for the ﬁrst time in the summer of 2010, combines Horvitz’s interests in promoting public law and helping students.

“This is one of the areas where Dean Levi’s leadership has been really impressive,” Horvitz says. “Recently, because of the economic environment, Dean Levi has allocated money to fellowships to help some of the students get meaningful summer experiences. They have been sending me e-mails and letters about working for federal judges and in the Department of Justice, and it’s been one of the most rewarding things I’ve ever done in a philanthropic sense. My jaw drops at the opportunities and practical experience they’re getting. I’m thrilled to be in a position to be able to help.”

Horvitz says he hopes other Duke Law graduates will help maintain the institution’s strength and provide students with the very best opportunities.

“I’d like to appeal to the other alumni of the school to stay with Duke, to continue to support it in these hard economic times,” he says. “We need to continue supporting it to keep it functioning at a high level.”