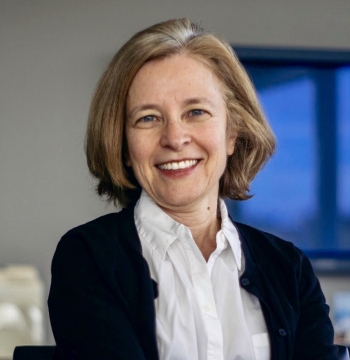 Sarah Bloom Raskin, the former deputy secretary of the U.S. Department of Treasury and a visiting professor since 2020, has been named the Colin W. Brown Distinguished Professor of the Practice of Law and will become faculty director of the Law School’s Global Financial Markets Center in January.

An expert in financial regulation and monetary policy, Raskin has researched and taught at the Law School since 2017, when she joined Duke University’s Rubenstein Fellows Academy. She is currently a distinguished fellow at the Global Financial Markets Center and a senior fellow in the Duke Center on Risk, part of the university’s Science & Society Initiative, and teaches Business Associations and two upper-level seminars, Law and Financial Anxiety and Climate Change and Financial Markets.

“I am thrilled that Sarah Bloom Raskin has joined the Duke Law faculty on a long-term basis as a distinguished professor of the practice,” said Kerry Abrams, James B. Duke and Benjamin N. Duke Dean of the School of Law. “In addition to being a leading voice on the future of our financial system, she is a dedicated teacher who cares deeply about her students. Having someone with her deep experience in government, expertise on financial policy and regulation, and national and international stature is an extraordinary opportunity for them and for Duke Law School.”

She will take over directorship of the Global Financial Markets Center, which promotes the interdisciplinary study and discussion of global financial markets and financial regulation, from Lawrence Baxter, the David T. Zhang Professor of the Practice of Law. Baxter revitalized the center (formerly the Global Capital Markets Center) when he rejoined the faculty in 2009.

Raskin has had a close affiliation with the center since arriving at Duke and has been a frequent participant in its programs, including public conversations with former Rep. Barney Frank on the evolution of financial regulation and with Acting Chairman of the  Commodity Futures Trading Commission Rostin Behnam on the risks that climate change poses to the stability of our financial system, as well as a daylong conference on the 2008 financial crisis and its aftermath. She also participated in The Financial Policy Response to Covid-19 and Financial Law and Regulation: Practitioner’s Perspective, readings courses taught by the center’s executive director, Senior Lecturing Fellow Lee Reiners.

“With Sarah’s appointment as the next faculty director, the center will be able expand its footprint and fulfill its mission of being the world’s leading academic institution dedicated to financial law and regulation,” said Seth Gardner JD/MBA ’94 T’89, chairman of the center’s advisory board. “The center has already established a thought leadership role in the fields of fintech law and climate finance, and under Sarah’s leadership, the center is well positioned to lead the charge on the two issues that will define the future of global finance.”

Added Joseph A. Smith, Jr., a senior fellow in the center and former North Carolina commissioner of banks: “I have known and worked with Sarah for over a decade and am delighted to have the opportunity to do so again. As a public official at both the state and federal level, Sarah has used her considerable talents to ensure that our country has a financial system that is both resilient and fair. Duke is very lucky to have her.”

Raskin was a part of two multidisciplinary research projects with center and Law School faculty through the university’s Bass Connections program. The first, “How Do Cyberattacks Hurt Me,” which was co-led by Raskin and Reiners, explored the pathways and articulation of harm from consumer data breaches. The second, “American Predatory Lending and the Global Financial Crisis,” was an oral history project led by Reiners that also included Professor Sara Sternberg Greene and Vice Provost for Interdisciplinary Studies Edward Balleisen and sought to deepen the public’s understanding of the roots of the financial crisis and analyze policy responses with an eye toward future crises. Raskin also launched Bounceback, a center forum focused on understanding consumer resilience.

During her Rubenstein Fellowship, Raskin also worked closely with the Rethinking Regulation program at Duke’s Kenan Institute for Ethics. The program’s co-director, Perkins Professor of Law, Professor of Environmental Policy, and Professor Public Policy Jonathan Wiener, is now the co-director of the Duke Center on Risk, a collaboration drawing from a variety of disciplines and focused on society’s capacity to analyze, anticipate, mitigate, and adapt to risks.

Raskin, a graduate of Harvard Law School, has throughout her career worked across public and private sectors in both legal and regulatory capacities. Her work has centered on financial institutions, financial market utilities, consumer protection issues, the adaptation of financial regulatory tools as they pertain to climate risk, bolstered prudential standards, and resolution planning. Her private sector experience includes having served as managing director at the Promontory Financial Group, general counsel of the WorldWide Retail Exchange, and at the law firms of Arnold and Porter and Mayer Brown. Earlier in her career she served as banking counsel for the U.S. Senate Committee on Banking, Housing, and Urban Affairs. She currently is a member, with Baxter and Professor Gina-Gail Fletcher, of the Regenerative Crisis Response Committee, a group of leading experts in law, economics, and public policy focused on the use of fiscal, monetary, and regulatory policies in a climate-transitioned economy.

The Colin W. Brown Professorship was endowed in 2016 by JM Family Enterprises with matching funds from The Duke Endowment as a tribute to Brown ’74, the president and chief executive officer of the Deerfield, Fla.-based company. Brown, a senior member of the Duke Law Board of Visitors and longtime scholarship benefactor at Duke Law, has been recognized for his leadership of the family-owned business, one of the largest private companies in the United States.