Rawn James Jr. spent four years researching and writing Root and Branch: Charles Hamilton Houston, Thurgood Marshall, and the Struggle to End Segregation, during which time the attorneys at the center of the story became so deeply embedded in his mind that he sometimes dreamt about them. The experience, while exhausting, helped him develop an appreciation for the Houston and Marshall’s considerable dedication and sacrifice.

“What I really came away with was how all-consuming the struggle was for each man. I look now as an attorney with some experience and as a husband and a father, and I can fully appreciate the enormous sacrifice that each man made in fighting these battles across the country,” James says. “They were on the road tens of thousands of miles every single year litigating these cases. It wasn’t a matter of just going out to Topeka, Kansas. They were all over, at great personal risk to themselves. That really impressed me.”

Published earlier this year by Bloomsbury Press to rave reviews, Root and Branch tells the story of Houston and Marshall’s protracted legal battle to end segregation in public education that culminated in the 1954 Supreme Court decision Brown v. Board of Education of Topeka.

[Read reviews of Root and Branch from The Washington Post and USA Today.]

James explains that Houston and Marshall’s decades-long effort began with a 1936 case challenging segregation at the University of Maryland Law School.

“They started with law schools for a number of reasons, the first of which is that the triers of fact at the trial level, the judges, have all been to law school,” James says. “The attorneys for the NAACP did not have to tell the judges or rely on an expert witness to tell a judge what separates a good law school from a bad law school.”

“We get the idea, even many attorneys have the false idea, that Brown v. Board of Education was something of a lightning bolt decision that came out of nowhere and shocked America when in fact many of the observers at the time — political watchers and lawyers — saw that the court was marching directly toward holding that segregation was unconstitutional in a public education setting,” James says. “The Texas attorney general at the time saw it, the governor of Texas saw it, and they said ‘This is what is coming. This is what Thurgood Marshall and the NAACP and its lawyers are trying to do.’ Marshall and Houston set out, beginning in the 1930s, to desegregate the country.”

James identifies two primary motivations for writing Root and Branch, which is intended for legal and general audiences alike. First, he wanted to bring attention to Houston’s often overlooked contributions to the ongoing legal battle. Next, he wanted to examine the relationship between the two attorneys and “how they moved from professor and student to mentor and mentee to being very close friends.”

He conducted his research at the Library of Congress and Howard University, where Houston was dean of the Law School and Marshall a student. He used no research assistants. That meant long hours of work outside of his full-time job with the Office of General Counsel for the Department of the Navy, where he represents the Navy and the Marine Corps in civilian matters and contract disputes. He recently was promoted to senior trial counsel.

“It was a killer,” says James, who is married to Maureen James ’02 with one son and another on the way. “I set the alarm for three or four in the morning before work. I would stay up late at night, work on it on weekends. It was very difficult. The next time around, particularly if it’s a larger subject matter, I may have to succumb and get at least one research assistant.”

James anticipated having a book contract soon after he signed with a literary agent at age 19, but his is decidedly not an overnight success story. He spent more than a decade “shouting into the abyss,” as he calls it, with a handful of unpublished, full-length manuscripts and assorted magazine clippings serving as the primary evidence of his authorship. Finally, in 2010, Bloomsbury Press published Root and Branch.

“I wrote all through law school as well as all through college, just constantly writing,” James says. “But then even when it happens it’s still that overnight feeling to you. One day you’re hoping to get an agent and the next day your sitting in an editor’s office in New York City and he’s trying to convince you to let him publish your book.”

Originally a fiction writer, James switched to non-fiction in 2005 when his freelance magazine work helped him discover that he enjoyed interviewing people, uncovering facts, and “finding the narrative.” The change served as something of a relief, he says, because he no longer had to make anything up.

“I have a citation for everything that’s in quotations,” he says. “There are some cases I write about in Root and Branch, particularly criminal cases, that are definitely stranger than fiction but because they’re fully documented I can put them in.”

His legal background not only enabled him to locate the most important elements of cases and strategies utilized by Houston and Marshall but also, he says, helped make him a better writer.

“A lawyer, particularly a litigator, needs to know how to write well and clearly and to express a complex idea as simply as possible. That’s what a good writer should do,” James says. “The practice of law for me is very much the practice of writing and re-writing. I got much better at it in law school and over the years of practicing. Law is the study of words. At the end of the day that’s really what you do as a lawyer, and it’s what you do as a writer.”

James plans to continue writing about history and the law and will chose his next work from a short list of ideas he currently has in mind. The process is partly, he says, a matter of choosing which idea he can live with for years at a time. 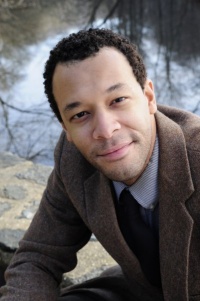