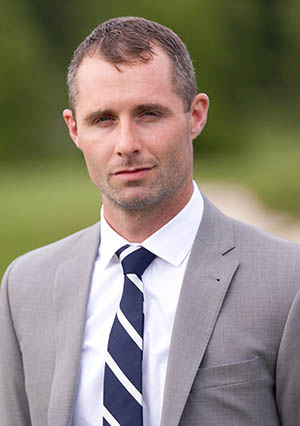 Chief Justice John Roberts of the U.S. Supreme Court has selected Conor Reardon ’14 as a clerk for the 2016-2017 term. Reardon is the ninth Duke Law graduate to be chosen for a clerkship on the high court since 2010.

Reardon is currently clerking for Judge Robert Chatigny on the U.S. District Court for the District of Connecticut, and will clerk for Judge José Cabranes of the U.S. Court of Appeals for the Second Circuit in the 2015-2016 term.

“We are all delighted for Conor. He was a terrific law student and he is a kind and modest person,” said Dean David F. Levi. “He will be well prepared to clerk for the Chief Justice after clerking with two exceptional judges. By the time he is done clerking, he will have had a unique opportunity to see the federal court system at every level and to have served the justice system. What a wonderful way in which to begin what surely will be a distinguished career in the law.”

Roberts built a bit of anticipatory drama into his clerkship offer, Reardon said.

“The Chief Justice called chambers and he actually asked to speak with Judge Chatigny and not me,” Reardon said. “I was aware that this was occurring, which was somewhat nerve-wracking for me.”

After several minutes, Reardon was summoned to the judge’s office, where he took the call with Roberts.

“It was a lovely conversation,” Reardon said. “He offered me the clerkship and I was very happy to accept it.”

While Reardon said he’s spoken to other Supreme Court clerks from Duke Law, including Amy Mason Saharia ’05, who clerked for Associate Justice Sonia Sotomayor, and Sarah Boyce ’12, who is currently clerking for former Associate Justice Sandra Day O’Connor, their conversations never turned to the prestigious positions.

“We never talked about the application process because it’s just sort of a black box,” Reardon said. “Dean Levi and the professors at the Law School manage the affair for you. I submitted materials to them and they sort of made things happen at the right time.”

Reardon said the support he received from the dean and several of his Duke Law professors, including Joseph Blocher, Lisa Griffin, Stuart Benjamin, Curtis Bradley, Stephen Sachs, and Neil Siegel, was invaluable.

“A number of them clerked for Supreme Court justices, and Professor Sachs actually clerked for the Chief Justice. So their willingness to take the time to write letters for me and give me a vote of confidence — and, I suppose, to say having been there before that they thought I might be able to do the work of a Supreme Court clerk —was of course very important.”

Sachs said that Reardon is one of the most impressive students he's met at Duke.

"Conor was a joy to teach, and I think he'll do a great job," he said. "The Chief Justice often interviews many candidates before making his decision, so it's a real credit to Conor to have been chosen."

While at Duke Law, Reardon was notes editor of the Duke Law Journal and won the Outstanding Achievement Award for Constitutional Law & Civil Rights and the James S. Bidlake Memorial Award in Legal Analysis, Research & Writing. He is a graduate of Brown University, where he played baseball and was named an All-American. Following graduation from Brown he taught history and literature for Teach For America at a Title I middle school in Bridgeport, Conn.

Reardon, who is preparing to start work on the U.S. Court of Appeals later this summer, said he is careful not to look forward too much to his Supreme Court clerkship.

“Next year is going to be an intensely valuable experience that I’ve been looking forward to for some time, and also very clearly a prerequisite to what I’ll be doing the year afterwards,” he said. “There’s a lot that you learn as an appellate clerk and I’m looking forward to learning all of that next year.”