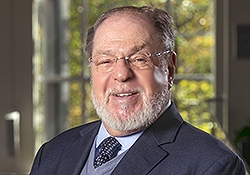 Jerome Reichman’s latest book examines how scientists share collections of microbes and related data to advance research in such areas as medicine, agriculture, and climate change, and how current systems for facilitating that transnational exchange can — and should — be improved.

Reichman, the Bunyan S. Womble Professor of Law, is the co-author of Governing Digitally Integrated Genetic Resources, Data, and Literature: Global Intellectual Property Strategies for a Redesigned Microbial Research Commons (Cambridge University Press, 2016). A renowned scholar of intellectual property law, he has long focused on legal and policy strategies to resolve challenges arising from the grant of exclusive property rights foundational to intellectual property law, such as access to patent-protected essential medicines in developing countries. Refining the operation of the scientific infrastructure is just such a problem.

“A lot of IP law and policy is concerned with profits from downstream inventions,” he said. “In this book, we are dealing with the value of upstream scientific inputs on which all research depends.” Research uses of both microbial cultures and plant cultivars, he added, are caught in a tug of intellectual property rights asserted by both developed and developing countries.

Reichman’s co-authors of the book, which was supported by a long-term grant from the National Institutes of Health, are Paul F. Uhlir, the former director of the Board on Research Data and Information at the National Academies in Washington, D.C., and of the U.S. Committee on Data for Science and Technology, and Tom Dedeurwaerdere, director of the Biodiversity Governance Unit and professor of philosophy of science at the Universite Catholique de Louvain in Belgium.

The specimens in public microbial culture collections are gathered primarily in biodiversity rich developing countries by scientists who also often seek inputs from indigenous people as to how they have traditionally used the organisms. “These bio-prospectors may learn that natives are using a plant or a microbe for a particular purpose, and that gives them ideas from which genetic research develops and end products are made, such as foods, medicines, or perfumes,” Reichman said.

The Nagoya Protocol on Access and Benefits Sharing — a 2010 supplement to the 1992 Convention on Biological Diversity (CBD), which sought to ensure the conservation of the world’s biodiversity resources — is a starting point for Reichman and his co-authors. The Nagoya Protocol provides a framework for ensuring that countries where seeds and microbes held in public collections originate, along with relevant traditional knowledge, share in the profits and other benefits gleaned from their use in one of two ways, Reichman said. Researchers can negotiate directly with governments which would almost certainly overvalue them. Alternatively, under the Nagoya Protocol, the microbial culture collections could enter into a multilateral treaty to establish a transnational exchange and remuneration system, like that already established for public seed banks in the International Treaty on Plant Genetic Resources for Food and Agriculture (the International Treaty) of 2001.

“The Nagoya Protocol was significant in its recognition of a multilateral approach to benefit-sharing,” Reichman said. “It essentially codifies a ‘take-and-pay’ rule for these global public goods: If a plant cultivar put in a public collection to be shared freely for research purposes is then used for some commercial objective, the user must pay a small percentage of the resulting proceeds, a tithe, back to the Benefit Sharing Fund of the International Treaty.”

In other words, plant cultivars essential to world food security that is increasingly imperiled by climate change have already been made available through a take-and-pay regime under the International Treaty, sometimes known as the “Crop Commons.” That treaty protected the public seed banks at a time when governments of countries where seeds originated were demanding their return with a view to reaping greater profits through bilateral negotiations for their use, Reichman said. The tithe paid for use of the seeds goes back to the treaty regime to support research.

Reichman and his co-authors argue that participants in the existing microbial research commons, which is still operating on a national and regional basis, should follow the example of the seed banks in adopting a multilateral take-and-pay approach.

Their analysis of the history and governance modalities of selected science commons that pool raw materials and data, including the Crop Commons and the World Federation of Culture Collections, reveals that most are not rationally organized, Reichman said. Instead, they typically adopt overly bureaucratic administrative models and fail to include scientists in their leadership.

“Science-driven entities logically require that scientists have voting rights in their governing structures,” he said. “We pinpoint how microbial culture collections could adopt a more enlightened form of governance for an international commons that conforms with the Nagoya Protocol.”

The authors also delve into ways that data derived from genetic resources, which are subject to the CBD and the Nagoya Protocol, should be organized and shared. In addition to examining how various voluntary and mandatory data-pooling regimes operate, they focus attention on four highly sophisticated data-sharing arrangements, which they call Transnational Open Knowledge Environments (OKEs). Reichman considers these OKEs, which require a complex legal infrastructure, to be the model of the future for sharing both hypotheses and research inputs, including data.

“These are active enterprises seeking common pathways to commonly interested discoveries,” he said. “They devise their own digital infrastructure, they develop hypotheses among themselves, and they pool the work on multiple projects. They are pooling inputs and outputs as they go, with an agreed set of premises and an agreed set of objectives.

“We think scientific organizers aiming to design a research commons for microbiology should make it conform not only to the legal requirements of the CBD and the Nagoya Protocol, but also design it to emulate the sharing strategies of these Open Knowledge Environments that are springing up.”

Over the eight years they worked on this book, Reichman and his co-authors engaged the scientific and policy community in an ongoing dialogue on how a microbial research commons should work, which included inviting international experts to discuss the topic at a 2011 conference at the National Academies of Science. “That was a precious resource,” said Reichman. “We didn’t just do our own investigations, but invited the players to give us their views.” Papers from that conference were published in a volume titled Designing the Microbial Research Commons (The National Academies Press, 2011), which Uhlir edited.