Reiners, Lawrence JD/LLM ’21, and others from Duke Law contribute to Bass Connections analysis of predatory lending

The group found that an anti-predatory lending law enacted in North Carolina in 1999 likely helped smooth the housing bubble and ease its subsequent crash. 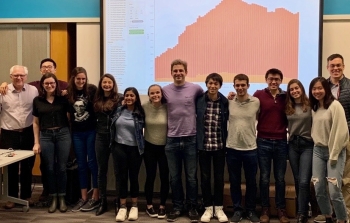 A Bass Connections research team co-led by Lee Reiners, executive director of the Global Financial Markets Center at Duke Law, has created an online resource that allows users to better understand the causes of the 2008 economic collapse in North Carolina and nationally.

The website, American Predatory Lending, utilizes data visualizations and analyses, legislative timelines and memos, and oral histories analyzing the housing market in the United States and North Carolina and the policy debate over how alleged predatory lending contributed to the financial crisis. Its findings suggest that North Carolina’s 1999 enactment of an anti-predatory lending law likely helped the state avoid the steep home price runups and subsequent sharp declines experienced elsewhere in the nation.

“The project’s foundational premise is that so much of what we know about the crisis has been told from a New York or Washington, D.C.-centric point of view,” Reiners said. “This is the first time that anyone has captured the state experience.”

The website is the product of a year-long collaboration between Duke University students and faculty through Bass Connections, an interdisciplinary academic program that gives students a chance to apply classroom lessons to complex societal challenges. Comprised of fifteen Duke students, including Hayley Lawrence JD/LLM ’21, and two University of North Carolina students from the fields of economics, law, statistics, computer science, engineering, public policy, history, business, and interdisciplinary data science, the team continued its collaborative work even after campuses were closed due to COVID-19.

They were led by Reiners, Ed Balleisen, Duke University Vice Provost for Interdisciplinary Studies and Professor of History, and Joseph A. Smith Jr., a nonresident fellow at the Global Financial Markets Center and the former North Carolina Commissioner of Banks. Duke Law faculty contributors included Professors Sara Sternberg Greene and Lawrence Baxter, as well as Rubinstein Fellow Sarah Bloom Raskin, former Deputy Secretary of the U.S. Department of the Treasury and former Federal Reserve Board governor.

“We are so impressed by what our students were able to accomplish this year,” said Balleisen. “They learned an enormous amount, especially about the challenges of working cohesively in a team, and produced top-notch analysis and superb oral histories.”

Lawrence, who led undergraduate students in crafting policy memos about the key legislation in place at the time of the crisis, said the experience taught her a great deal about consumer protection policy, team management, and leadership. After completing her degree, she plans to work on behalf of consumers in financial services.

“As someone who grew up during the Great Recession, I was curious to examine the financial crash, its causes, and its aftermath from an academic perspective,” Lawrence said. “We are hopeful these policy memos will be an informative resource for those looking to enhance their understanding of the global financial crisis.”

The American Predatory Lending project will be expanded to other states in the next academic year and the leadership team will include Debbie Goldstein, executive director of the North Carolina Leadership Forum and former executive vice president of the Durham-based Center for Responsible Lending.

NC fared better because of its anti-predatory lending law

The global financial crisis was caused in large part by deteriorating underwriting standards at banks and nonbanks alike, which led to a housing price bubble that deflated rapidly. As the team’s findings reveal, the mortgage market evolved in complex and little understood ways in the decade or so leading up to the crisis, as illustrated through interviews with legislators, regulators, banking sector leaders, and the heads of consumer organizations; data analyses that detail the state’s residential mortgage landscape; and policy memos and timelines that outline the pattern of state and federal legislation that shaped the lending environment.

Data visualizations show the evolution of the housing market in the United States and North Carolina in the ten years preceding the onset of the crisis. They include historical comparisons of U.S. and North Carolina homeownership rates, the house price index, and of the delinquency rates for prime and subprime borrowers.

The data show that North Carolina was less affected by the housing bubble than some other states. After 2000, home price appreciation in the U.S. outpaced that in North Carolina by a considerable degree, likely the result of the state’s enactment in 1999 of an anti-predatory lending law that cracked down on undesirable lending practices. As several interviews on the site suggest, this law constrained the provision of mortgage credit on particularly unfavorable terms to borrowers, thereby dampening one of the main accelerants of home price appreciation. U.S. and North Carolina home prices peaked in 2006 and 2007 respectively, with the subsequent decline being less severe in North Carolina. However, once the housing bubble burst, the homeownership rate in both the state and the rest of the country declined, and they remain well below their pre-crisis peaks.

“The Bass Connections team has done a great job of assembling economic, financial and historical materials that give a balanced and fascinating picture of the circumstances surrounding the enactment of North Carolina’s pathbreaking predatory lending legislation,” Smith said. “I hope and expect that scholars, journalists and the public will find it to be a valuable aid in understanding the run-up to the financial crisis.”

It may also provide insights into how the nation’s current economic crisis may play out. Widespread unemployment resulting from COVID-19 shutdowns could shake the foundations of the housing market in the coming months, Reiners warned.

“While North Carolina and most other states have eliminated the worst pre-crisis consumer abuses, the overall structure of the market remains in place,” he said. “This includes an overwhelming reliance on Fannie Mae and Freddie Mac to backstop or guarantee new mortgage issuance. With millions of Americans now out of work and unable to pay their mortgage due to the COVID-19 pandemic, these institutions may once again be on the brink of collapse.”