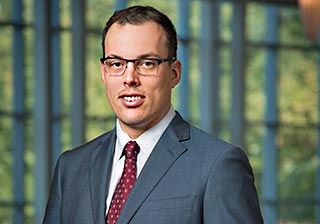 Lee Reiners has joined the Duke Global Financial Markets Center as director. Reiners, who previously worked for five years at the Federal Reserve Bank of New York (FRBNY), is in charge of day-to-day operations of the center, which is designed to help prepare students for careers in financial law, policy, and regulation. Lawrence Baxter, the William B. McGuire Professor of the Practice of Law, serves as the center’s co-director.

At the FRBNY, Reiners served first as a supervisor of systemically important financial institutions and then as a senior associate within the executive office. In the latter capacity, he helped coordinate the FRBNY’s engagement with international standard-setting bodies, such as the Bank for International Settlements and the Financial Stability Board. While at the FRBNY, Reiners, who holds an MPP with a global policy concentration from Duke University’s Sanford School of Public Policy and the chartered financial analyst designation, worked closely with other federal and state regulatory agencies.

“We are delighted that Lee has come to Duke Law,” Baxter said. “His background in both public policy and core regulation of big banks, is ideal for our center. Lee has started strongly out of the gates and is bringing exciting new focus to the center.”

Upon arriving at Duke in August, Reiners, who is also a lecturing fellow, began to develop a range of programming and scholarly presentations that bridge the divide between theory and practice in the field of financial regulation. He launched The FinReg Blog as a forum for center faculty and affiliated practitioners to reflect on different aspects of finance and regulation, as well as a monthly series in which scholars from the Law School and Duke’s Fuqua School of Business present and discuss works in progress.

Spring-semester programming includes a financial markets “boot camp” through which students will learn about financial products and the markets they trade in, as well as a new two-credit course in which prominent alumni practitioners will share insights on specific areas of financial regulation. Regular lunchtime events will highlight issues of law, business, technology, and regulation that impact financial markets and institutions. And planning is underway for the launch of a yearly spring forum on a topic of current importance to the financial markets.

Through the fall semester, Reiners has led a discussion course on financial policy outcomes of the 2016 elections.

“The course provided students an opportunity to go beyond the typical horse-race media coverage and actually look at the financial policy positions of both candidates and their respective parties,” he said.  “Now that Republicans control both houses of Congress and the presidency, we could potentially see a wholesale dismantling of post-crisis regulatory reforms, including the Dodd-Frank Act. During the course we discussed conservatives’ critiques of Dodd-Frank and reform proposals, so students should be prepared for whatever lies ahead.”

In the spring, he will run a new center-sponsored course titled Financial Law and Regulation: Practitioner’s Perspective, in which he will facilitate discussions between students who are preparing for careers in finance law and regulation with visiting alumni experts in specific areas.

“Every aspect of financial law and regulation depends heavily on its daily practice,” he said. “The environment changes all the time, and the scope of regulatory discretion, at every level of government — state, federal and international — is so large that successful practitioners must understand the current trends in regulatory thinking and practice. This course will allow students to dive deep into a different aspect of modern financial regulation every week.”

Reiners has offered lectures in some of Baxter’s Big Bank Regulation class sessions and will co-teach in such spring courses as FinTech and the Law, and Derivatives: Financial Markets, Law and Policy.  “Students crave this kind of real-world experience, particularly at the hands of someone who thinks at the analytical level Lee does,” said Baxter.

He said that it’s an optimal time for the Global Financial Markets Center, which has been under his guidance since 2010, to ramp up its examination of the financial market landscape and regulatory structure. “In the aftermath of the financial crisis of 2008, we were focused on the ‘smoking guns’ — the subprime crisis, the mortgage-lending fiasco, and collapse of derivatives — which are all, really, just different components of a larger disaster. Any one of those events, without the others, would not have led to a global financial crisis.” With a new model of financial regulation now in place due to the implementation of the Dodd-Frank Act and acceptance of the Basel III capital and liquidity standards for internationally active banks, scholars are able to apply “more sober-minded metrics” to the issue of financial law and regulation.

This is also a good time to evaluate the numerous new changes promised by the incoming Trump administration, Baxter said. “Even if they involve substantial changes to the Dodd-Frank framework, we now have a fairly coherent model against which to assess the merits of change proposals, and the center, as a neutral venue with a desire to promote ideal policy outcomes, is ideally placed to perform an important service. Some very interesting policy proposals are likely to be put on the table, with various constituencies demanding that their grievances be addressed. In my mind, this makes the center even more important as a dispassionate forum for thinking about the right results.”