At the age of 67, Tigar says he still enjoys pursuing justice, but chooses not to take on the lengthy, high-profile cases that made him famous. “I’m like an old dog that always pursued cars — now I’m sitting on the porch and barking as they go by,” he jokes. In fact, he’s busy training the next generation of trial lawyers at Duke Law School.

After serving as a visiting professor at Duke since 2006 — and deciding to settle in North Carolina with his wife, Jane, an attorney, author, and yoga teacher — Tigar has joined the faculty as a professor of the practice of law. He will teach appellate litigation in the coming academic year, thus helping students master the finer points of top-level advocacy through advanced seminars. Litigation should be taught in levels, says Tigar, a former chair of the Litigation Section of the American Bar Association.

“First we need to make sure that students care about the basic building-blocks of substance and procedure rulings,” he explains. “Then, we have to talk about the tools a litigator uses, such as direct evidence, cross examination, and rules of evidence.” A third level, he says, is teaching students to “listen and to care, to understand the human stories — of defendants, victims, and witnesses.”

It’s important for students to understand how judges, juries, defendants, and attorneys make choices about how to deal with cases, says Tigar. “I want to help them understand how the operation of the system that calls itself ‘criminal justice’ has real effects on people. The best lawyering takes into account whether it will improve the human condition and further claims for justice.”

Tigar says he also wants students to appreciate the social importance of litigation, what he terms the “fourth level” of advocacy teaching. “In this country, to a degree not found in any other, great social issues take the form of litigated cases,” he says. “Great social struggles are reflected and embodied in such cases as Amistad, Dred Scott, the great civil rights rulings, and the issues being argued before the Supreme Court today. … To be a constructive participant in this kind of litigation, you must understand what Martin Luther King called the ‘arc of history.’”

A native of Glendale, Calif., Tigar earned a degree in political science at the University of California, Berkeley, while working as a journalist for a nonprofit radio station. After working abroad, he had to choose between journalism, history, or law as a profession.

“I thought, a journalist has lots of access and can write things — be involved as an observer. A scholar can teach students and publish, but with a law degree, you could do it all,” he says.

He was influenced, too, by the era — the height of the civil rights direct-action movement. “I became a lawyer because I wanted to participate in the struggle for human rights,” he says. “I met a lot of folks and read a lot of books that helped deepen my understanding of how I might be a constructive contributor.”

After graduating first in his law school class at Boalt Hall, Tigar joined the firm now known as Williams & Connolly, he practiced for several years before starting his own firm. He later taught at UCLA and lived in France while working on a book on European legal history, Law and the Rise of Capitalism. He returned to the United States to represent Cesar Chavez’s son, Fernando, who had refused induction the Army, and to argue the case of Gelbard v. United States, one of seven he has argued before the Supreme Court.

Tigar has balanced scholarship, teaching, and advocacy throughout his career. He has taught at American University’s Washington School of Law, where he remains professor emeritus of law, and from 1987–1998 held the Joseph Jamail Centennial Chair in Law at the University of Texas Law School. He also has been visiting professor at the Faculty of Law in Aix-en-Provence, France. He retains ties to Austin where the Texas Civil Rights Project’s new building is named for him — the Michael E. Tigar Human Rights Center.

Having spent more than 40 years with “one foot in the academic world and the other in the world of law practice,” Tigar says he’s had about as much fun in his career as a person could have. “And I’ve been able to do it all because I have a law degree.” — Debbie Selinsky 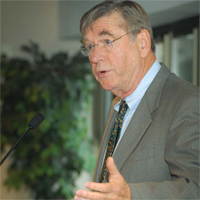