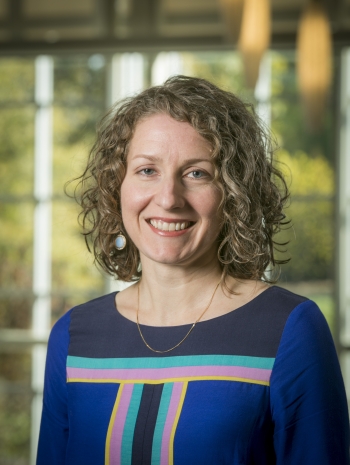 Clinical Professor Rebecca Rich ’06 received the 2020 Distinguished Teaching Award during the annual Duke Outstanding and Noteworthy Endeavors (D.O.N.E.) Awards on April 9. More than 100 people joined together online to view the presentation of awards for teaching and student contributions to the Duke Law community that was held virtually due to the COVID-19 pandemic.

Chloe Shostak ’22, the academics chair for the Duke Bar Association, which sponsors the D.O.N.E. awards, presented them on behalf of the students who nominated each award winner.

Shostak read praise from multiple students who nominated Rich, the assistant director of legal writing, for the Distinguished Teaching Award: “‘Quite simply, there is nobody in the building who offers the blend of humility, availability, authenticity, and positivity that she brings into her classroom and office every day.’”

In particular, students noted Rich’s outreach during the COVID-19 outbreak, Shostak said. Wrote one: “Of all my professors, she sent the most communicative and open messages. In the sea of anxiety and chaos, her simultaneous sense of calm, encouragement, and faith in our abilities served as a buoy that helped me get through the first week of remote learning. The Duke Law community is so fortunate to have her on its faculty, and I am already envious of the incoming 1Ls who will get to be her students next year.”

Rich, who teaches first-year Legal Analysis, Research and Writing and the upper-year Scholarly Writing Workshop, appeared on-screen to thank students for the award, and shared how special it was to receive it as a Duke Law graduate.

“It’s especially meaningful for me to receive this award as a teacher at my own alma mater,” she said. “Beginning my teaching career at Duke Law was exciting and overwhelming. I felt like I had a lot to live up to. I loved law school, and that was in large part because of my exceptional professors — many of whom are now my colleagues and your professors. It took me literally years to get up the courage to call Professor Metzloff by his first name.”

Rich said that as a student she was especially inspired by Jerome Reichman, the Bunyan S. Womble Professor of Law, and she continues to draw on his example in her teaching.

“First, he taught contract law so well,” she said. “There was almost an urgency to his teaching. He gave off this vibe that this stuff we were learning was so important and so interesting, and that really helped motivate me to also care about the material.” She recalled his “absolutely masterful” lecture on the last day of class that pulled together everything they’d learned. Rich said she aspires to give the same kind of last lecture every semester. “I know I’ve not achieved that yet — and with the way this semester is finishing up, I imagine this won’t be the year either.”

The other lesson she said she learned from Reichman was to be kind and encouraging to students.

“A few times over the course of the semester, he emailed the whole class to tell us that we had done a really good job in class that day,” Rich said, noting that the act “seems so basic” but was exceptionally meaningful to her and her classmates. “Now that I think about it, maybe this says more about my level of insecurity as a 1L than anything else — but what I take from it in thinking about what it means to be a good Duke Law professor is the importance of finding ways to connect with students, to encourage them, and at the same time, to have high expectations for what students can learn. I hope I’ve managed to do those things in my own teaching.”

The Distinguished Teaching Award is accompanied by a stipend supported by the Class of 1967.

The Women Law Student Association (WLSA) was given the Greatest Role in Building Relationships Award. Accepting the award, WLSA President Christine Mullen ’21 gave a shout-out to the first-year class. “With the Class of 2022 having the highest percentage of women Duke Law has ever seen — 59 percent! — it was a truly amazing year to be a part of WLSA. This garnered a lot of excitement around WLSA and gave us a platform to work with more people than ever before.”

In particular, Mullen said that WLSA has increased law firm sponsorships by more than 300 percent, launched an allies program to engage people of all genders in the group’s mission, increased outreach to admitted students, and hosted one of its largest networking receptions with alumni.

The Federalist Society was awarded for Outstanding Contribution to Civic Discourse. Shostak praised the group for collaborating with many other student groups to explore such issues like free speech, content moderation, and impeachment.

Said Brent McKnight, the chapter’s president: “We are honored and grateful to be receiving this award, especially since fostering high-quality discourse is at the heart of what the Federalist Society student chapters do at their respective law schools.”

The Innocence Project, whose members work to overturn wrongful convictions, received the Greatest Service to the Outside Community Award. One nominator, said Shostak, emphasized the passion everyone in the Innocence Project brings to their work.

Innocence Project Executive Director Maddy Mumma ’20 said the award was a particular honor coming at the end of a “wonderful year” for the group.

“Over the past year, the Innocence Project and the Wrongful Convictions Clinic saw two of our clients set free — Dontae Sharpe and Charles Ray Finch were exonerated in 2019 after serving a combined 68 years in prison,” she said. “We also were able to greatly expand the work and reach of the Innocence Project by starting the Reintegration Project, aimed at easing the reintegration process for all North Carolina exonerees, and the Duke Innocence Project Podcast, which will feature the stories of North Carolina exonerates, their families, and their advocates. None of this could have been accomplished without the over 100 student volunteers.”

One of Goldshtein’s nominators noted her dedication to such organizations as the Business Law Society and the Transactional Law Society, as well as her work as a LEAD Fellow and coordinator of the Twiggs Beskind Tournament, Shostak said. “‘I can’t begin to count the number of times I’ve seen her looking exhausted or sleeping in odd corners of the Law School because she is functioning on three hours of sleep. The sacrifices she has made for the organizations she runs were well worth it in her eyes to ensure important events were a success.’”

Saying she was honored to receive the award, Goldshtein thanked fellow student leaders and Law School faculty for supporting her efforts. “I am really looking forward to seeing all of the new organization leaders rise above and beyond what we were able to achieve this year,” she said.

Students who nominated Wajda similarly praised his dedicated engagement with numerous organizations and initiatives, Shostak said. “One said, ‘He has actively served on more board than most people think is possible.’” He has been active with the Federalist Society, the DBA, the Cancer Pro Bono Project, the Judicial Appeals Board, and the Twiggs-Beskind Tournament. He was also a LEAD Fellow.

Said Wajda: “I cannot even begin to express how grateful I am, especially because I know that for every student and group recognized today, there are dozens of other students and groups who will tirelessly continue to build and strengthen the Duke Law community.”

Ana Maganto Ramirez ’20 received the Richard Lin Service Above Self Award after receiving an overwhelming number of nominations, Shostak said, explaining that the award “recognizes character and actions that reach across the Law School community, regardless of a leadership position or title.” She read the comments of one of Ramirez’s nominators.

“‘She is one of the many people that made 1L year a great experience. She would go out of her way to connect with other students and make everyone feel welcome. She would drop encouraging notes in the mailboxes of other 1Ls and even gave each person in our section a Valentine’s Day card.’”

Other students who nominated her noted her committed to students of color, as well as her work in reviving the Latinx Law Students Association, or LALSA.

In accepting the award, Ramirez said she tries to live by the philosophy of Leslie Knope, the fictional protagonist of the sitcom “Parks and Recreation:” “‘There are three things that are important in life. Friends, waffles and work. Or waffles, friends, work. Doesn’t matter, but work is third.’ Now, I know some of my professors are here, so that is not to say that I don’t work hard. But I always do try to put people above anything else that I have in life. I believe that everything else will fall into place just by doing a good deed. I hope everyone follows that throughout their lives.”