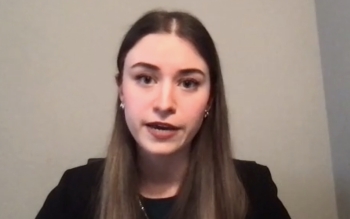 Ricigliano represented the petitioner in Jones v. Governor of Florida, a case challenging a state amendment that requires felons to complete full financial restitution to have their voting rights restored. John Addy ’23 argued for the respondent.

After prolonged deliberation, the judges gave the edge to Ricigliano, praising the clear road map she gave during her opening argument and her ability to return to it quickly.

“We took you off task a little bit but you were able to get your footing, respond directly and then pivot back to your arguments,” Blackburne-Rigsby said. “Your oral advocacy demonstrated an ease and conversational tone that was responsive to our questions and showed a good command of the record. You had a good rapport with the panel, a good command of the legal arguments and of the facts.”

Said Scriven: “You have learned the lesson early that if you can’t rely on the law, lean on the policy – and you were way over on the policy, leaning hard and consistently, and I think that’s what you have to do, especially on a constitutional law question.”

Addy, who faced a bench that began firing questions right after he started his opening statement, was commended for his cadence and “steady, unflappable” presence.

“You really knew your weaknesses and were ready to give up what you had to give up and that is a difficult thing to do,” Hendrix said. “You were candid in that regard and I appreciate it.”

Hendrix said both Ricigliano and Eddy displayed “phenomenal” poise for first-year law students. “It’s unbelievable that you have done this well in a difficult oral argument. You should both be so incredibly proud of yourselves. To be the finalists at such a fantastic law school is quite an accomplishment.”

“I heard how short a time you’ve had to deal with this record and this law is very complicated,” Scriven noted. “It hails from my fabulous state of Florida, so I appreciate the elucidation that you all have provided.”

In the Eleventh Circuit case Jones v. Governor of Florida, convicted felons challenged an amendment to the state constitution approved by voters in 2018. That amendment would restore the voting rights of thousands of felons with the condition that they complete every term of their criminal sentences. Subsequent legislation enacted to implement the amendment defined those terms as including imprisonment, probation, and payment of any monetary penalties imposed by the sentencing court.

Ricigliano, for the petitioners, argued that the law and amendment violate the Equal Protection Clause of the 14th Amendment by discriminating on the basis of wealth. When the right to vote is restored only to those who can afford to pay their legal financial obligation, she said, heightened scrutiny applies and the law fails that standard.

“If the goal is re-enfranchising only people who are rehabilitated, the idea that a poor person cannot be rehabilitated is irrational,” Ricigliano said. “If someone is genuinely unable to pay back a fine, that does not mean that they are not worthy to re-enter civil society. If the goal is meeting the demands of justice, then it warrants questioning why part of those fines the felons had to pay back may include paying for a public defender, which they had because they couldn’t afford counsel in the first place.”

After pushback from Hendrix, who asked why it is irrational to require offenders to make victims of financial fraud whole, Ricigliano said the financial requirement was separable from the restoration of voting rights.

Addy had barely begun his opening statement when the judges began questioning him. Addy argued that the Eleventh Circuit had properly applied a rational basis of review, and said heightened scrutiny did not apply.

When Scriven asked whether it was rational to deny a poor person the right to vote, Addy steadfastly maintained the state’s twin interests in disenfranchising felons and re-enfranchising only those who have been fully rehabilitated and have satisfied the demands of justice.

“You were the perfect lawyer to do this very mean argument about not letting people vote when they haven’t paid their fines and you were not apologetic,” she said. “You gave a nod to the trial judges – ‘that’s the judgment and we are not here to rethink that’ – and I appreciate that.”

In the actual case, the Eleventh Circuit ruled en banc in favor of the state, holding that the Florida provisions re-enfranchising convicted felons passed constitutional muster under rational basis review.

Addy graduated from the University of Virginia. He is involved with the Duke Bar Association, the Federalist Society, and the Business Law Society. After receiving his JD he plans to pursue a clerkship and practice commercial litigation in Washington, D.C.

Ricigliano graduated from Villanova University. She is a member of If/When/How: Lawyering for Reproductive Justice and the Coalition Against Gendered Violence. Following graduation, Julianna plans to pursue a clerkship and practice litigation in New York.

The Hardt Cup Competition was launched by students in the Class of 1964, in memory of their classmate, A. Lee Hardt, who died after completing his first year at Duke Law. The annual four-round competition for 1Ls is organized by the Moot Court Board and held in the spring, with participation in the first round a mandatory component of the 1L Legal Analysis, Research and Writing curriculum. Participation in subsequent rounds, through which students can earn an invitation to join the Moot Court Board, is voluntary.

From the 236 students of the Class of 2023 who participated in the first two rounds, 82 students opted into the Hardt Cup, and 25 students were offered and accepted membership on the Moot Court Board. In each of the four preliminary rounds as well as the octofinal round, students argued in front of members of the board. Panels consisting of both faculty and local practitioner judges scored the quarterfinal and semifinal rounds.