Sarah Boyce came to Duke Law with a plan in mind. Fresh from a two-year stint in Teach for America, she had seen the limitations of the American education system up close. She taught kids whose learning opportunities were stymied by hunger or neglect, kids who stayed late at school to shoot hoops to delay a trip home through a dangerous neighborhood. She saw how critical the contributions of a caring teacher can be but decided that her contributions would be most effective in the arena of law and policy advocacy.

“I decided after the two years that, while getting teachers in the classroom was important, the problem was a lot bigger than that,” she says of her time teaching in Prince George’s County, Maryland, just outside of Washington, D.C. “It was going to take a lot of people interested in changing policy and changing the law with respect to housing, poverty, food programming, all kinds of things, to really fix things in the schools. A lot of the biggest tangible changes have happened through the courts and that’s what I’m most attracted to doing.”

She has built her career at Duke Law on this goal. She co-chaired the Education Law and Policy Society and worked at the Department of Education, Office of Civil Rights, during the summer after her first year of law school. As editor in chief of the Duke Law Journal, she published a note challenging the 1973 Supreme Court decision in San Antonio v. Rodriguez, which rejected the notion of a constitutional right to education. And she has focused on building her litigation and writing skills, through her journal participation as well as through participation in Moot Court, a teaching-assistantship for a legal writing course, and a 2L summer position at Gibson Dunn, where she focused on appellate work.

She was on the winning team for the Dean’s Cup Moot Court competition in both her second and third years of law school, an experience she calls “humbling.”

“The moment just before you take that deep breath and begin addressing the judges, particularly a panel as respected as the one we were facing, is equal parts terrifying and exhilarating," Boyce said.

But Boyce thrives on a challenge. She participated in a course and Spring Break trip examining housing disputes in East Jerusalem; the experience helped her understand some of the possibilities and limitations of the law. “I was really interested in learning about a specific, ongoing, real conflict and witnessing the implications of the conflict firsthand,” she says. “Some problems are not solvable through law, but I’m not sure that’s a problem with law so much as it is a problem with the problems. I’ve kind of always been an idealist and more attracted to the problems that seem intractable. I think they sometimes seem intractable because they’re important.”

“Being the editor in chief of the Duke Law Journal has been the most significant, exhausting, rewarding thing I’ve done in law school. It’s been a constant reminder of how much and why I admire my classmates, and it’s a great opportunity to learn hands-on skills. I hope it has made me a better writer; it has definitely taught me a lot about areas of the law that I didn’t have time to devote an entire class to, and it allowed me to develop relationships with professors that I wouldn’t have otherwise had.”

She credits her classmates and professors with creating an environment that values academic rigor and intellectual inquiry but remains supportive, collegial, and collaborative. “A lot of people have helped me,” she says, rattling off names of professors who have mentored her. “Professor (Doriane) Coleman is interesting because, until this semester I never even had her for a class, but I’d talk to her every time I had a big decision to make.

“For me, it was inspiring that, at Duke, some of the very best faculty members are women. There’s something about seeing people who look like you, in this case women, doing things you hope to do one day, that makes your chances of doing those things seem more realistic. And that really serves as a catalyst for working hard.” 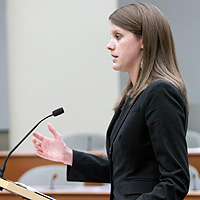