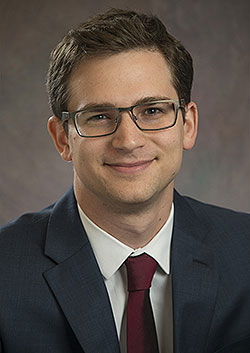 Ben Grunwald, a scholar of criminal law, criminal procedure, and criminology, will join the governing faculty on July 1 as an assistant professor of law. He comes to Duke Law from the University of Chicago Law School, where he is a Bigelow Teaching Fellow and lecturer. Before teaching at Chicago, Grunwald clerked for Judge Thomas Ambro of the United States Court of Appeals for the Third Circuit.

Grunwald, who received a BA in philosophy and sociology, an AM in statistics, a JD, and a PhD in criminology from the University of Pennsylvania, applies doctrinal analysis and empirical methods to evaluate rules of criminal procedure, often challenging prevailing assumptions about how those rules operate. His most recent work involves an examination of whether open-file discovery policies serve as a check on prosecutorial power. His other areas of research include the effects of private policing in high-crime areas, the correlation between sentencing guidelines and sentencing fairness, and the optimal age of majority for separating the juvenile and adult justice systems.

“The various crises in American criminal justice are among the most urgent public policy issues of our time,” said Samuel Buell, the Bernard M. Fishman Professor of Law and a former federal prosecutor. “Those crises — in incarceration, policing, legal representation, and other areas — can only be addressed successfully if we more precisely understand their causes and consequences, which are matters requiring rigorous empirical inquiry. Ben Grunwald brings exactly the skills and passions to the critical questions in these areas that are necessary for them to be subject to successful attention and investigation.”

Grunwald’s interest in questions of criminal justice policy and procedure emerged during his undergraduate study of sociology and was confirmed during his post-graduate research at the Urban Institute’s Justice Policy Center. “I became fascinated by the enormous discretion the criminal justice system bestows on actors in the system, many of whom are unelected,” he said. His observation of the need for more empirical analysis in the fields informed his graduate studies.

In his article, “The Fragile Promise of Open-File Discovery,” forthcoming in the Connecticut Law Review, Grunwald examines whether the emerging practice of having prosecutors turn over all their files to defense attorneys — considered by many scholars a centerpiece of criminal justice reform —results in fairer outcomes for defendants. Applying a theoretical approach to the question and undertaking an empirical study of the effects of open-file statutes in North Carolina and Texas, Grunwald concludes that the benefits of full discovery alone are vastly overstated.

“The project tries to understand how requiring prosecutors to hand over all their files to defense attorneys can influence and reshape the criminal process and whether it results in more rational case outcomes,” Grunwald said. Legal scholars largely support open-file discovery, he notes in his paper, but claims of a fairer process and increased judicial efficiency “are based largely on intuition and anecdotal data without extended theoretical analysis or systematic empirical testing,” he writes.

His study of the Texas and North Carolina cases led Grunwald to conclude that, while open-file statutes resulted in increased disclosure from prosecutors and better enforcement of defendants’ Fourth Amendment rights, the data “provide little evidence that open-file discovery had much of an effect on charging, plea bargaining, sentencing, trial rates, or time-to-disposition” in either state.

“While I cannot rule out all theoretical possibilities,” Grunwald writes, “this pattern of results is most consistent with the theory that, due to heavy caseloads, defense attorneys lacked the time and resources to use the file to their clients' advantage. The potential effects of open-file might also have been mitigated by the adaptive behavior of police and prosecutors in the collection of evidence and assembly of the file.”

Grunwald has also researched and written about the long-term effects of Project Safe Neighborhoods (PSN), a federally-funded initiative to stem violence in high-crime areas. In “Project Safe Neighborhoods in Chicago” in the Journal of Criminal Law & Criminology, Grunwald and co-author Andrew Papachristos examine data related to the initially successful program, which created an interagency team that combined community outreach and severe sentencing for certain firearm-related offenses. The paper finds that, although the project may have had early success in two small, high-crime neighborhoods, that success wasn’t sustained when the program was later expanded to the rest of the city.

The paper recommends steps for further evaluation of data to determine the specific causes for the program’s decline in effectiveness, though Grunwald and Papachristos note that the program’s expansion was not accompanied by an increase in resources. Another potential cause, the authors note, is that “the effects of large-scale social interventions can dissipate over time. It is possible, for example, that focused deterrence strategies like PSN exert a short-term shock on homicide rates that dissipates over time as residents become accustomed to the new and more punitive criminal justice ‘regime.’”

Grunwald is also currently working on an article examining how appellate courts decide whether to publish their opinions. This decision is important because only published opinions establish binding precedent on future cases; unpublished opinions apply only to the parties in a particular case. “When judges sitting on a multi-judge panel can’t reach agreement on the outcome of a case, the standard view says that they have two options,” he explains. “They can hash it out in private, negotiate, and publish one precedential opinion. Or they can issue an opinion with majority opinion and dissent.” The paper provides empirical evidence that divided panels have a third option: They can engage in a practice Grunwald calls strategic publication, by issuing an unpublished opinion, and thus relieving the pressure of precedential weight.

In his first semester at Duke Law, Grunwald will teach Criminal Law. His other teaching interests include criminal procedure, torts, empirical legal studies, and evidence.

“I’m incredibly excited about coming to Duke for many reasons, and one of them is the fantastic criminal law faculty from whom I can learn an enormous amount,” Grunwald said. “The faculty writes about criminal justice issues from a variety of different perspectives, and so many, especially those working in the clinical program, have deep criminal law experience.”