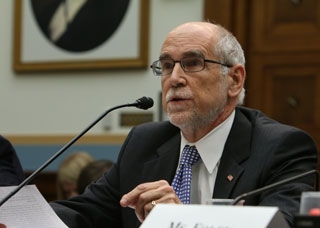 Professor Christopher H. Schroeder testified before the House Judiciary Committee on Feb. 26 on the president’s constitutional duty to execute laws.

Schroeder, the Charles S. Murphy Professor of Law and Public Policy Studies, testified in a hearing titled “Enforcing the President’s Constitutional Duty to Faithfully Execute the Laws.”  A scholar of constitutional and environmental law and regulation, Schroeder has deep experience in the Executive Branch, most recently serving as assistant attorney general for the Office of Legal Policy at the U.S. Department of Justice.  Much of his current scholarship and research concentrates on questions of presidential authority.

Stating in his written testimony that “in our constitutional democracy, taking care that the laws are executed faithfully has a number of facets,” Schroeder focused on the nature of federal laws and some of the most significant issues that arise in enforcing them in situations where the Executive Branch does not face a question of the constitutionality of the laws themselves.  By demonstrating how laws are executed, he sought to illuminate important aspects of the president’s Take Care responsibility. His testimony stated, in part, that “because mere legal error is consistent with faithful execution of the laws, I do not believe the avoidance of legal error goes to the heart of the president’s obligation.

“Exercising ‘considered judgment and conscience’ contemplates a good faith and conscientious effort to take actions within the discretionary authority granted by law. So long as the President is taking care to ensure that this is being done, he is discharging his constitutional obligation.”  Read Schroeder’s written testimony.

Schroeder returned to the Duke Law faculty in 2013 after serving for nearly three years as assistant attorney general the Office of Legal Policy, where he supervised the evaluation of President Obama’s nominees to the federal judiciary and provided policy advice to the attorney general and the White House on a variety of law enforcement and national security issues.  He has also served as acting assistant attorney general in the Office of Legal Counsel where he was responsible for legal advice to the attorney general and the president on a broad range of legal issues, including separation of powers, other constitutional issues, and matters of statutory interpretation and administrative law. He earlier served as chief counsel to the Senate Judiciary Committee.  At Duke Law School, Schroeder co-directs the Program in Public Law.