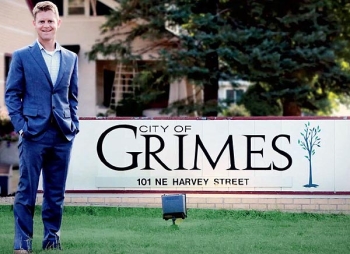 In today’s charged political atmosphere, leaders who bring people together to solve problems and implement positive change can be hard to find. Scott Mikkelsen ’06 avoided the rancor that seems synonymous with politics after no one filed to run against him for mayor of Grimes, Iowa, last November.

“Local politics doesn’t have the same toxicity right now as state or national politics,” says Mikkelsen, who took office in Grimes, one of the fastest-growing cities in Iowa, in January. “You’re still able to say, ‘Look, we’re trying to solve problems and come up with solutions for everyone.’ I think some of the real creative solutions happen at the local level.”

MRC now manages more than $350 million worth of investments, much of it in wind, solar, and other environmentally friendly sectors. Mikkelsen says the idea for the company, which uses a combination of private capital and tax credit-enhanced capital, came to him in a Duke Law classroom.

“Our focus has always been triple bottom line,” he says. “We want an environmental return, we want some kind of community return — typically good, quality jobs — and we want business growth and return.”

Mikkelsen grew up in Dike, Iowa, a farming community of about 1,000 people. When he wasn’t focusing on school or sports, he was, he says, “detasseling corn, ‘walking’ beans, shoveling grain at the co-op — things that are a normal part of growing up in the rural Midwest.”

Recognizing at an early age that he had an interest in business and “a knack” for numbers, he majored in finance at the University of Northern Iowa. An internship with the university controller’s office, during which he worked on a portfolio of fixed-income securities, deepened his interest in finance and led him to obtain a graduate degree in economics at the University of Manchester in the U.K. before joining an institutional research and trading firm in Chicago. A desire to “have a broader impact” subsequently brought Mikkelsen to Duke Law, where the former college football player says he found the faculty equivalent of an “all-star lineup.”

“I had Constitutional Law with William Van Alstyne, Torts with James Boyle, and Contracts with Jerome Reichman,” Mikkelsen recalls. “It was such a great education in thinking deeply and critically, and it has translated into everything else I’ve done.” Working with faculty adviser Erwin Chemerinsky (now the dean of Berkeley Law and another “all star”) to establish the Duke Journal of Constitutional Law and Public Policy was another memorable Duke Law experience, he says.

But Mikkelsen found his calling through Clinical Professor Andrew Foster’s Community Economic Development course and his enrollment in the Community Enterprise Clinic that Foster directs.

While exploring strategies for financing economic opportunity in low-income communities, he learned about how tax credits, including the New Market Tax Credit, can be used to incentivize investment in community redevelopment projects.

Foster showed his students how tax credit-based investment was transforming Durham through such marquee projects as the American Tobacco Campus that anchors the downtown entertainment district and the Golden Belt complex that houses artists’ studios, businesses, and lofts in a refurbished textile mill.

“When Scott was in the class, we went over to Golden Belt on the first day, and they were in the early stages of developing it,” Foster says. “Hearing the developer talk about what it would be like, what they were going to do with all these buildings, how it led to redevelopment of the single-family housing around it, how New Market and Historic Tax Credits helped fuel that project, made it all much more concrete. You really see this concentrated effect of what you can achieve when you bring a lot of resources into one community.”

“It was like a lightbulb went on,” Mikkelsen says. “I thought, ‘I’ve got this private market experience, but I’m also interested in how to solve social problems and public problems.’ The class married those problems and possible solutions, and it grabbed me.”

Mikkelsen quickly saw the potential New Market Tax Credits held for building businesses in rural communities and for promoting environmental sustainability. Upon graduating from Duke Law in 2006, he headed back to Iowa to practice law and started work on establishing a tax-advantaged fund. He initially focused on wind power, and by 2010 MRC was funding renewable energy businesses and environmentally friendly real estate projects, primarily in the Midwest.

“In 2009, Treasury awarded us the ability to offer partial credit on up to $65 million in investment,” Mikkelsen says. “To that point we’d had commitments from private investors, but everything kind of came to fruition in late 2009. In 2010, Midwest Renewable Capital was going full-time.”

MRC found itself at the forefront in developing early wind projects, he says. But as the sector evolved and became focused on utility projects, Mikkelsen expanded the company’s purview and geographic reach, using New Market Tax Credits for other clean energy, advanced manufacturing, and clean-tech endeavors. This has included companies converting solid waste into biofuels, recycling glass into reflective paint, and converting wood waste into wood pellets. Over the last three years, Mikkelsen has expanded into more traditional venture capital in the clean-tech, ag-tech, and sport-tech sectors through C9 Capital. Collectively, these entities have around $480 million in investments. “We still remain impact investors at our core, we have just expanded our reach,” he says.

“The New Market Tax Credit has mostly been used for projects like brick-and-mortar redevelopment, and he’s really found a way to fund business activity in the renewable energy space, which lots of people are excited about,” Foster says. “Scott took those lessons from Durham and applied them in a totally different context, which is, I think, one of the things that has made him so successful. His success shows what it means to be a lawyer-leader.”

Mikkelsen, who claims that just living in Iowa entails paying attention to a “permanent, public political discourse,” found that his longstanding interest in politics deepened and was supplemented by an acute interest in public policy during his time at Duke Law. He got involved in grassroots politics as soon as he and his wife, Amber, moved to Grimes in 2006.

”We are lucky because we have presidential campaigns coming through here every couple years,” he says. “There are a lot of ways to get involved in the political process.”

Raising his four children in a town undergoing explosive growth — Grimes has doubled in size over the past 10 years and is projected to double again in the next 10 — made the decision to run for mayor easy. It also shaped the issues Mikkelsen chose to prioritize: lowering taxes and developing a strategic vision to channel the city’s growth. He says he is focused on vital infrastructure, like roads, and quality-of-life amenities, such as the parks, ball fields, and bike paths that sustain families like his. “I’ve coached my kids’ football, baseball, and basketball teams, and I was an athlete in high school and college, so I know how important those things can be to a community,” he says.

From Grimes, Iowa, to other communities across the country, Mikkelsen is working with local leaders to solve social and public problems. In his business and public leadership roles, Mikkelsen says, “I utilize the same set of problem-solving skills and critical thinking I honed at Duke Law to build teams that implement positive, sustainable solutions.”