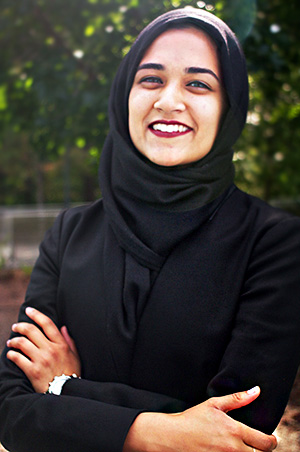 The murder of three young people by a neighbor at a Chapel Hill apartment complex on Feb. 10, 2015, shocked the Triangle, garnered national headlines, and profoundly influenced both Shajuti Hossain’s academic and extracurricular focus at Duke Law.

The tragedy hit particularly close to home for Hossain, then a Duke University senior majoring in economics and public policy. Like her, the victims, Deah Barakat, his wife, Yusor Abu-Salha, and her sister, Razan, grew up in Raleigh’s Muslim community, and they had friends in common. Her brother had also once lived in the complex where the three were shot by a man who had exhibited hostility toward them on several prior occasions and who expressed disdain for religion on social media.

“It was definitely a life-changing experience to have that happen in our backyard,” said Hossain who observed that the murders coincided with an escalation of anti-Muslim rhetoric during the presidential primary campaign. Newly admitted to Duke Law, she resolved to do what she could to foster a sense of fellowship among Muslim law students, while also building bridges with the broader community, leading her to co-found the Muslim Law Students Association (MLSA) in her first year. And she was inspired by the victims’ deep commitment to community service to use her legal studies to further social justice in a variety of ways.

Hossain, who held leadership positions with Duke’s Muslim Students Association during her sophomore, junior, and senior years, said she was gratified by the support and goodwill she found for MLSA at Duke Law. “To start a student organization, you have to get 30 signatures from students interested in becoming members, and we got what we needed overnight, just through a Facebook post,” she said, also noting enthusiastic faculty support from Guy- Uriel Charles, the Edward and Ellen Schwarzman Professor of Law, and Clinical Professor Jayne Huckerby, who directs the International Human Rights Clinic and serves as faculty advisor for the organization.

MLSA’s first large event, a panel discussion on the legal questions involved in hate crime legislation and other issues raised by the Chapel Hill murders that had occurred exactly a year earlier, was co-sponsored by the Duke Bar Association and the Light House Project, a Muslim outreach initiative founded by family members of the victims. The discussion drew more than 200 people to Duke Law on a Friday evening. Hossain has since helped organize events on countering anti-Muslim bias in policy, an introduction to Islamic law, and family law in Islam, as well as a discussion of religious freedom held in conjunction with the Duke Law chapters of the Christian Legal Society and the American Constitution Society.

In April 2016, MLSA was honored by the Duke Bar Association for highlighting the value of community and fellowship at the Law School. “This organization is new to Duke Law, and this award speaks to the impact it has already had on students,” said Risha Asokan ’17 in presenting the award. “As one student put it, ‘at a time when Islamaphobia is rampant, they are doing a great job at developing a competing and compelling narrative.’”

Having examined environmental and social justice extensively as an undergraduate, Hossain opted to explore other civil rights and human rights issues in law school, citing the examples of Barakat and the Abu-Salha sisters, who worked with refugees abroad and fed homeless people in Raleigh. “There is so much more good work to be done,” she said.

Over her 1L summer, Hossain worked on increasing school diversity with the Educational Opportunities Project of the Lawyers Committee for Civil Rights Under Law in Washington, D.C., helping to draft a training manual for staff attorneys serving students and parents. “I learned a lot about the existing laws, and framed them in a way that would be accessible to parents and students,” she said. “Our job was to turn legalese into common language.”

In her second year, Hossain undertook an independent study project on discrimination in public schools, for which she wrote a guide for lawyers on how to counsel Muslim students who have faced discrimination in U.S. public schools. The paper includes tips on administrative remedies, litigation, and working directly with schools, as well as policy recommendations for lawmakers. Last fall she helped revise North Carolina’s policies relating to homeless students during an externship with the state Board of Education, after specifically requesting to address issues relating to the most marginalized populations.

“I learned that the dispute resolution policy for students and families experiencing homelessness is inconsistent across the state and very difficult for the schools and students to understand and use,” she said. “The policy didn’t give enough specific direction about how process was supposed to work. So, in consultation with the state coordinator for homeless education and some of the district staff who help homeless students, I redrafted that policy.”

Hossain also gained a new interest in employment law as a 2L through Professor Trina Jones’ Employment Discrimination course. “My favorite classes have always been the ones where we look at the societal implications of laws and the role we can play as attorneys in either changing the laws or advocating for our clients, or both,” she said. “In Professor Jones’ class, we really looked at how these laws affected people.” She spent the following summer at Goldstein, Borgen, Dardarian, and Ho, a plaintiff-side employment firm in Oakland, Calif., where she drafted declarations, motions, and discovery responses for wage and hour cases, and drafted sections of a forthcoming American Bar Association treatise on opposing employers’ summary judgment motions in sexual harassment, equal pay, and retaliation cases.

Hossain handled employment law and housing cases during a third-year semester in the Civil Justice Clinic and engaged in litigation on behalf of farm workers and construction workers in an externship at the N.C. Justice Center’s Workers’ Rights Program. “A lot of them have immigrant backgrounds or are here on work visas,” she said. “I learned a lot about the Fair Labor Standards Act, the Migrant and Seasonal Worker Protection Act, and North Carolina wage and hour law, essentially refining some of what I’d learned during my summer job in the Bay Area.” She plans to return to start her career in the Bay Area in an employment law practice.

Huckerby, who has overseen Hossain’s work with MLSA, praised her efforts to bridge Duke Law with the broader community at Duke and in the Triangle and her commitment to linking lawyering and social movements. Added Stella Boswell, assistant dean for public interest and pro bono: “Shajuti keeps asking, ‘Who are the most marginalized, and how can we make a difference for them?’”

Hossain will have a chance to do just that when she begins a yearlong fellowship on Sept. 4 with Public Advocates in San Francisco, where she will work on affordable housing matters with the organization’s metropolitan equity team.

In April, Hossain received the 2018 Forever Duke Student Leadership Award from the Duke Alumni Association for her integrity, service to the Duke community, and embodiment of the university’s guiding principle of “knowledge in the service of society.” Prior to graduation, she also received awards for her public service at Duke Law and for outstanding academic achievement in the area of labor and employment law.

“Shajuti is one of only a few Muslim women in the class of 2018,” said Jones in presenting the academic award. “With such small numbers, a student might justifiably be tempted to sit back, observe, and downplay her difference. That is not, however, Shajuti’s way. Shajuti does not sit back; she jumps in. She does not observe; she transforms. She does not minimize differences; she celebrates them.”