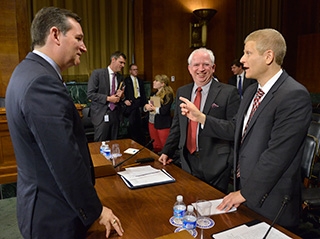 Professor Neil S. Siegel testified about recent Supreme Court rulings, judicial activism, and proposals to reduce the independence of the federal judiciary before a subcommittee of the U.S. Senate Judiciary Committee on July 22.

The hearing of the Subcommittee on Oversight, Agency Action, Federal Rights and Federal Courts, chaired by Sen. Ted Cruz, R-Texas, was titled “With Prejudice: Supreme Court Activism and Possible Solutions.” Following the conclusion of the Supreme Court’s 2014-2015 term, Cruz called for a constitutional amendment to institute retention elections for justices.

Watch video of the hearing.

Siegel, the David W. Ichel Professor of Law, is an expert in U.S. constitutional law and theory and federal courts. He wrote about the issue of judicial activism in “Interring the Rhetoric of Judicial Activism,” 59 DePaul Law Review 555-599 (2010), in which he argues that accusations of judicial activism are generally made to signal disagreement with particular rulings, “not to express a genuine commitment to judicial deference or to the ideal of fidelity to law.” Siegel, who is co-director of Duke Law School’s Program in Public Law and D.C. Summer Institute on Law and Policy, also has written extensively on constitutional matters relating to health care reform and same-sex marriage issues that were the focus of two controversial rulings from the last term of the Court, King v. Burwell and Obergefell v. Hodges, respectively.

A professor of political science as well as law,  Siegel served as special counsel to Sen. Joseph R. Biden during the confirmation hearings of Chief Justice John G. Roberts and Associate Justice Samuel A. Alito. During the October 2003 term, he clerked for Associate Justice Ruth Bader Ginsburg at the U.S. Supreme Court. He also served as Bristow Fellow in the Office of the Solicitor General at the U.S. Department of Justice and as law clerk to Judge J. Harvie Wilkinson III of the U.S. Court of Appeals for the Fourth Circuit.

Video of the hearing is available here.