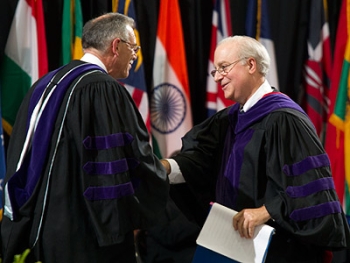 Addressing Duke Law School’s 2013 graduates at their hooding ceremony on May 11, U.S. Solicitor General Donald B. Verrilli Jr. told them that ethical responsibility should imbue everything they do as lawyers.

“You define yourself by the choices you make each and every day in carrying out your responsibilities – wherever you find yourself,” he said.

Verrilli addressed Duke Law School’s JD, LLM, and SJD graduates prior to their hooding in Cameron Indoor Stadium.  Two hundred and forty-two graduates received the JD degree during Duke’s weekend ceremonies, with 30 also earning an LLM degree in international and comparative law, and 24 also receiving a master’s degree from another graduate school at Duke University.  One graduate also earned an MD from the Duke School of Medicine.  Two JD graduates earned a Master of Global Business Law degree from Sciences Po in Paris, one of Duke Law School’s partner institutions.

As he did during a Lives in the Law interview with Dean David F. Levi prior to the hooding ceremony, Verrilli called his government service the most rewarding time of his professional life.  He also spoke of his pro bono representation of death row inmates during his long career in private practice.  These cases, he said, “took me to county courthouses in Georgia and Mississippi and Maryland, and they took me to the Supreme Court.”  More than anything, he said, they taught him about the importance of effective representation of counsel and the fact that behaving ethically is, at its heart, a matter of integrity.

The solicitor general told the graduates to expect some adversity in their professional careers.  “If you have acted with integrity, you will know how to act with integrity when times get tough. If you have acted with courage, you will know how to summon up courage,” he said.  He advised them to fight cynicism.  “It’s a constant struggle because the cynical impulse lurks in all of us," he said. "And given the nature of our work as lawyers, you are going to have plenty to feel cynical about.”

Verrilli also advised graduates to cherish the love of family and friends.  “It’s what gets you through when times are tough and it’s what makes the moments of joy and satisfaction -- moments like today for example – truly sweet,” he said.  His final piece of advice:  “Do not wait.” Invoking Dr. Martin Luther King Jr.’s “Letter from Birmingham City Jail,” in which King explained to fellow members of the clergy why the fight for civil rights could not “wait” to be fought solely in the courts, Verrilli observed that there is always time available “to do right,” and to involve oneself in worthy causes.

In his remarks, Dean David F. Levi praised the graduates’ many accomplishments in areas of scholarship and service to the community and to the profession.

“You published works of scholarship on matters of current importance, from sovereign debt to revitalizing the patent system to state water allocation,” he said.  “You organized conferences on a multitude of topics.  You represented clients and served the community through our clinics and pro bono programs.  You distinguished yourselves in national and international moot court and mock trial competitions.  You briefed, argued, and won cases in the United States Courts of Appeal.  You examined domestic and international issues and engaged in field research in places like East Jerusalem, Haiti, Ghana, and Guantanamo.  You participated in the classroom in the ‘mind on mind’ process of legal education which is as powerful as it is sometimes painful.

“You have our very best wishes for a fulfilling career in the law.  We hope that you will find ways to lead and to serve in your communities.  There will be many times when you will face difficult challenges in your professional life.  We have confidence that you will make us proud as you meet and surmount them.  You have already done so.”

Speaking on behalf of the LLM class, Johanna Roldán, from Quito, Ecuador, noted the value of studying at Duke with a diverse group of classmates from Asia, Europe, Australia, the Middle East, Africa, and Central and South America.

“Duke has truly changed us in a positive way, being exposed to such rich diversity helped us to know more about ourselves; and certainly education changes lives,” she said. “Diversity and unity are the legacy of our experience, that has inspired me to be standing here today and make a call to keep our commitment for improvement and service, our commitment to impact others’ lives positively!

“I am confident that wherever we go after our graduation, we will remember the Law School’s LEAD Blueprint, as a set of principles that inform committed lawyers. The Law is a powerful tool, the Law helps to shape societies, and the Law should always have a social function. As young professionals, we have the opportunity to lead the change; we are the world’s mind and heart!”

Addressing his JD classmates, Nick Passarello reflected on their many accomplishments, asking them to savor their many shared experiences in class and out.

“Since the first day of orientation, I’ve been consistently humbled by the intelligence, work ethic, and creativity of my classmates,” he said.  “At this valedictory moment, I urge you to focus not on what sets some of us apart, but the shared memories that link us all together. The sinking feeling we all got the first time we were cold-called 1L year; the energy of the basketball games we attended in this very arena; the sound of synchronized door knocking during on-campus interviews, the exhaustion of late nights holed up at the library, and finally the relief all of us felt when we turned in that last exam or paper a few weeks ago.  For me these are the things that best commemorate my time here, and the ones I’ll remember most when I look back.”

Board of Visitors member and Duke University trustee Peter Kahn ’76 welcomed each member of the Class of 2012 to the Duke Law alumni community.

Earlier in the day, Andrew Katbi’s JD hood and diploma were presented to his parents in a community ceremony in the Beber Sculpture Garden, where Levi also dedicated a flowering dogwood tree as a living memorial to the young man who was killed in a car accident on March 31.  Professors Neil Siegel and Michael Tigar and classmate Adam Faiella ’13 were among those who offered tributes at the ceremony led by Assistant Dean for Student Affairs Jason Belk.  Katbi’s classmates, faculty, and guests honored him with a standing ovation when his name was called during the hooding ceremony.

At the annual Faculty Awards ceremony on May 10, faculty and administrators honored the following graduates for outstanding academic performance and service.