The Legal Status of Advisory Opinions

Advisory Opinions of the International Court of Justice are becoming increasingly important: witness the 2004 Advisory Opinion on the Wall in Palestine and now the proposed advisory opinion on the independence of Kosovo. Despite their importance there is still uncertainty about the legal effect of advisory opinions. Clearly they are not binding on States, but are they binding on the United Nations itself? Judge Lauterpacht in an advisory opinion on South West Africa opined that they become the law of the United Nations. If this is so, do they bind all organs of the UN or only the organ that requested the Opinion and the Secretariat (including the Secretary-General)? The practice of the UN is unclear on this subject. What is particularly surprising is that Secretary- Generals have shown a reluctance to take advisory opinions seriously. This is particularly apparent in the case of the Wall Opinion which the Secretary-General refuses even to mention in his public utterances.

Professor Dugard has been nominated to serve as a judge on the International Criminal Court in The Hague. More 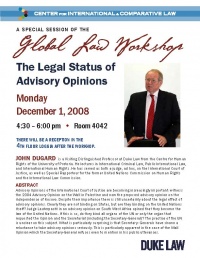