Senior Lecturing Fellow Shane Stansbury, an expert in cybercrime and national security, detailed why cryptocurrency has become the preferred method of payment in a wide range of criminal activity 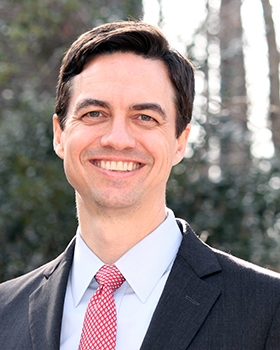 Senior Lecturing Fellow Shane Stansbury testified about the rising use of cryptocurrency to conduct illegal transactions in a wide range of criminal activity during a March 17 hearing of the U.S. Senate Committee on Banking, Housing, and Urban Affairs.

Stansbury, the Robinson Everett Distinguished Fellow in the Center for Law, Ethics, and National Security, appeared remotely during a hearing titled “Understanding the Role of Digital Assets in Illicit Finance.”

Since bitcoin’s adoption as the established currency on websites like Silk Road, a marketplace for illegal drugs and other goods and services, cryptocurrency has become “the perfect vehicle for anonymous, illegal transfers,” Stansbury said, and is now used in connection with a broad array of illicit activity, including human trafficking, extortion, and ransomware attacks ­– a growing problem for U.S. businesses and a serious threat to public safety and national security.

“Cryptocurrency’s primary appeal for ransomware criminals is the same as for other cybercriminals: obscurity,” he said, detailing “multiple opportunities for obfuscation along the path from payor to payee” that make illicit assets from criminal activity difficult to trace. There is also evidence that rogue nation states are stealing cryptocurrency to finance their regimes, Stansbury said, citing reports that North Korea stole $400 million in cryptocurrency in 2021.

“Blockchain technology offers fascinating possibilities for the future, and I look forward to seeing how it might be applied to enrich our society,” Stansbury said. “But we should also recognize the serious role that cryptocurrency is playing in criminal activity. Only then can we take the steps necessary to protect our health, our safety, and our national security.”

Stansbury teaches primarily in the areas of cybercrime and national security. He served for more than eight years as Assistant United States Attorney in the Southern District of New York, leading prosecutions in the areas of terrorism, cybercrime, espionage, money laundering, international public corruption, and global weapons trafficking. Prior to becoming a federal prosecutor Stansbury was a litigator at WilmerHale, focusing on international litigation and arbitration, foreign anti-corruption investigations, and white-collar criminal matters.