Stephen E. Sachs will join the Duke Law faculty in the coming academic year. An emerging scholar in the areas of civil procedure, constitutional law, Anglo-American legal history, and conflict of laws, Sachs will teach Civil Procedure in the fall 2011 semester.

Sachs comes to Duke from Mayer Brown in Washington, D.C., where he is an associate in the litigation practice. He clerked for Chief Justice John G. Roberts Jr. during the 2009-2010 Supreme Court term. He clerked for Judge Stephen F. Williams on the U.S. Court of Appeals for the D.C. Circuit in 2007-2008 prior to joining Mayer Brown.

“We are very much looking forward to having Stephen join our faculty,” said Dean David F. Levi. “He adds further scholarly depth to our already excellent junior faculty, and he has great potential as a teacher and scholar. He is also just a delightful person and will be a great addition to the Duke Law community.”

Sachs’s research, which spans a variety of substantive topics, centers on the history of procedural and private law, and the current implications of that history for public law and current disputes. In a recent work, he applied historical analysis to interpret the Full Faith and Credit Clause and Congress’s power over the effect of state records in other states. Much of Sachs’s research addresses “topics that are normally thought of as ‘constitutional law,’ but which cannot be considered as fully contained within the Constitution’s text,” he writes in a research statement. “Rather, they concern pre-existing bodies of law — ‘backdrops’ — that have been entrenched against various forms of subconstitutional change.” In one forthcoming work, he defends the existence and legitimacy of these backdrops as a category of American law.

“I am particularly impressed by the scholarly respect that his work on the Full Faith and Credit Clause shows for the historical materials he engages,” says Duke Law Professor Neil Siegel, a scholar of constitutional law and the federal courts.

Professor James Salzman, who chairs the appointments committee, calls Sachs a “great fit” for Duke Law. “His job talk was crisp, clever, lively, and thoughtfully engaging of tough questions,” said Salzman, the Samuel F. Mordecai Professor of Law and Nicholas Institute Professor of Environmental Policy. “All of this bodes well for him to be popular in the classroom. His decision to practice for a year following his clerkship with Chief Justice Roberts was, in my view, both a wise and mature decision, ensuring he will have practical experience in which to ground his scholarship.”

Having shared classes with his future colleague at Yale, Professor Joseph Blocher, a constitutional scholar, says Sachs possesses a “truly astonishing” intellect. “His brain waves are strong enough to toast bread,” Blocher jokes. “Steve has an absolutely relentless mind, which is equally adept when addressing over-arching questions of constitutional structure and detailed questions of civil procedure. When you combine that with his curiosity, sense of humor, and open-mindness, he's a natural scholar. He simply loves ideas. He's also extremely generous and warm and will be a fantastic teacher and colleague. We're extremely lucky to have landed him.”

“I am thrilled to be coming to Duke,” says Sachs. “It’s got an extremely warm and engaging atmosphere. It’s rare to find a place where people are so brilliant and so collegial at the same time.” 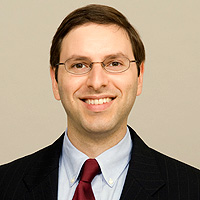