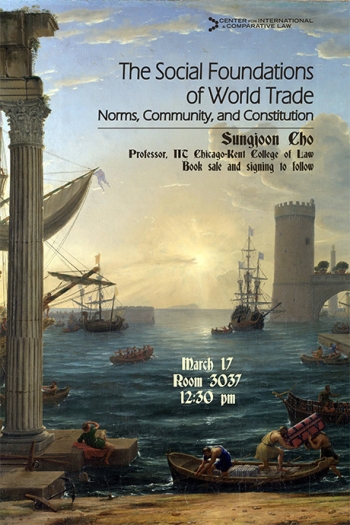 The Social Foundations of World Trade: Norms, Community and Constitution

Professor Sungjoon Cho, Professor of Law at IIT Chicago-Kent Law, will give a talk titled after his recently published book, "The Social Foundations of World Trade: Norms, Community and Constitution."  A book sale and signing will immediately follow the lecture.  This lecture is sponsored by the Center for International & Comparative Law.  Lunch will be served.

As highlighted by Pascal Lamy, the former head of the WTO, world trade traditionally involves state-to-state contracts and is based on an anachronistic 'monolocation' production/trade model. It therefore struggles to handle new patterns of trade such as global value chains, which are based on a 'multilocation' model. Although it continues to provide world trade on a general level with a powerful heuristic, the traditional 'rationalist' approach inevitably leaves certain descriptive and normative blind spots. Descriptively, it fails to explain important ideational factors, such as culture and norms, which can effectively guide the behaviour of trading nations with or without material factors such as interests and utilities. Normatively, the innate positivism of the traditional model makes it oblivious to the moral imperatives of the current world trading system, such as development. In Professor Cho's lecture, he will redress these blind spots by reconstructing the WTO as a world trade community from a social perspective.

Professor Sungjoon Cho, an authority on international economic law, joined the IIT Chicago-Kent faculty in 2003 and teaches courses in international law, international trade law, international business transactions, and comparative law.  He earned his LL.B. from Seoul National University in 1989, his M.P.A. degree from Seoul National University in 1994 and his LL.M. in international economic law from the University of Michigan Law School in 1997. In 2002, he received his S.J.D. (Doctor of Juridical Science) degree from Harvard Law School.  Professor Cho currently serves as a consultant to the South Korean government's Ministry of Trade, Industry, and Energy.  He has also served as an advisor to the Ministry of Strategy and Finance and the Ministry of Knowledge Economy.  He has held appointments as a Clark Byse Fellow at Harvard Law School, a Research Fellow with Harvard Law School's East Asian Legal Studies Program, and an Emil Noël Fellow at New York University Law School. He has taught at Northwestern Law School, Fordham Law School, Seoul National University School of Law (Korea), and Catholic University of Lublin (Poland).  Professor Cho's works have been selected for the prestigious Stanford/Yale Junior Faculty Forum twice (2007 and 2008). He has also been awarded the Dean's Challenge Grant, which is provided to Chicago-Kent College of Law faculty members who are most productive, three times (2004, 2006 and 2008). He was appointed Norman and Edna Freehling Scholar in July 2009.