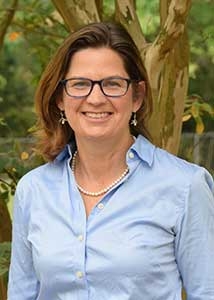 After majoring in biology at Wake Forest University, Susan Akers broke new ground for Duke Law students by pairing her JD studies with the pursuit of a graduate degree in environmental management from the Duke School of Forestry and Environmental Studies (now called the Nicholas School of the Environment).

“I had decided that law was a better fit for me than going after a PhD in biology and working in a lab,” she says. “I felt the MEM, with a concentration on natural resources, economics, and policy, brought law and biology together.” Duke lacked a formal program that fused the two, so Akers crafted her own proposal, modeling it after the dual JD-MBA option. It was formalized after a student entering the next year requested a similar option and is a path that many Duke Law students have chosen since.

Akers is certain the dual degrees helped her land a position, through the highly selective DOJ Honors Program, in the Environmental Enforcement Section. “I think it got me noticed,” she says. “It certainly made me stand out and get a second look that I might not have gotten otherwise.”

She spent more than 20 years litigating cases emerging from the Environmental Protection Agency’s (EPA) Region 1, which covers New England, and Region 2, which includes New York, New Jersey, Puerto Rico, and the U.S. Virgin Islands, after the agency’s attempts to resolve disputes failed. Many of those cases involved Superfund enforcement. Four years ago Akers moved to the group serving Regions 7 — Kansas, Missouri, Iowa, and Nebraska — and 10, covering the Pacific Northwest, where actions tend to be focused more on natural resources and Clean Air Act and Clean Water Act violations. As assistant chief, she visits each region at least once each year to review their dockets.

“It’s been interesting to see the difference in the docket in different parts of the country,” she says, noting that the DOJ essentially functions as outside counsel to client agencies like the EPA. While both Regions 7 and 10 produce mining cases that don’t arise in the Northeast, the Pacific Northwest also generates frequent cases relating to seafood manufacturing. “In Region 10 we see cases that involve anything from Clean Water Act violations arising from discharges of fish-processing waste into the ocean to Clean Air Act cases stemming the ozone-depleting refrigerants used on the ships to preserve the catch. And some of the remote seafood processors in Alaska generate their own power, so we’ve had issues relating to their power plants.”

Highly complex Superfund litigation was a longtime cornerstone of her practice, and one matter, relating to groundwater contamination at the Davis Liquid Waste Superfund Site in Smithfield, R.I., repeatedly appeared on her caseload. The case generated her first trial, against one primary defendant after seven others settled “on the courthouse steps.” Following a maternity leave, she handled settlements with dozens of third-party defendants. The case then “went away” until she was called in to handle further actions against numerous “contribution defendants” who had been found (at a third trial) to have contributed to pollution at the site. “I think it really annoyed the defendants that I was still around,” she says, laughing. “I remembered that they had refused to settle years before.”

The case also illustrates the complexity of Superfund litigation, as actions under the Comprehensive Environmental Response, Compensation, and Liability Act (CERCLA) are commonly known, Akers says. “Because these cases involve waste disposal that could have occurred decades before, we have to deal with corporate successor issues, mergers, and de facto mergers that were characterized as an asset sale.” Defendants sometimes want to broadly include “predecessors, successors, and related entities” in settlement documents, she adds. “We have to say, ‘We don’t know who that covers, so you’ll have to be very specific.’”

Reflecting on her long tenure at the DOJ, Akers says, “I can’t think of anything else I’d rather be doing. It’s an incredible honor to be a public servant, to represent the people of the United States, and to be entrusted with trying to do the right thing.” She believes that her colleagues share that motivation, and their collective expertise carries exceptional value.

“If an issue has been litigated under one of these statutes, it’s been litigated by us,” she says. “So when something comes up, you have all of the experts here to rely upon and people are very willing to help each other and to share briefs and things. It’s a very supportive atmosphere.”