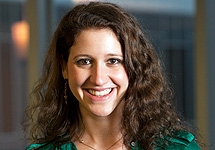 "To have professors who are so willing to learn about you and to know what it is you want to do and to help you get there — I don’t think I can say strongly enough what tremendous value that is to helping fulfill your ultimate goals."

Tatiana Sainati once planned a career as an English professor. She is still aiming to enter academia, but now has her sights set on the legal academy, with a focus on human rights. The shift came somewhat gradually, she explains.

It started with her part-time job at a preschool with an AmeriCorps “Jumpstart” program, while she pursued her master’s degree in English at the University of Virginia. “There was something really rewarding about working directly with people and seeing the difference that you could make in someone’s life,” she says with a smile. “And so as much as I love Jane Austen — and I really, really do — I decided that maybe there was something else I could be doing.”

Master’s in hand, Sainati took a job with a Minneapolis nonprofit that worked with refugees. “I was hearing stories about the horrific conditions people had endured in Somalia, in Myanmar, in Cambodia,” she recalls. “I just kept thinking that there has to be a way to intervene more effectively and more directly to help people. I realized there is a way, and it’s the law, and I needed a law degree to do this kind of work.”

That clarity of purpose has served her well as she has concurrently pursued her JD and LLM in international and comparative law at Duke, allowing her to “take advantage of everything I could,” she says, including overseas work and study, advanced clinic work, and intensive research opportunities.

Sainati enrolled, in her first year, in Professor Curtis Bradley’s human rights seminar focused on housing rights in East Jerusalem. “We studied some of the issues that are going on between Palestinians and Israelis in East Jerusalem and traveled to Jerusalem. It was an incredible experience.”

Sponsored by the Law School’s Steckley-Weitzel Fellowship and the Public Interest Law Foundation, Sainati served as a legal intern at the Documentation Center of Cambodia in Phnom Penh during her 1L summer. Her work for the independent research organization included preparing a report on effective human rights investigations that was submitted to the international tribunal trying senior Khmer Rouge leaders for atrocities committed during the 1970s; monitoring and reporting on trials; collecting survivor stories for genocide education projects; and crafting op eds on the importance and function of the court and the rule of law. The work later informed Sainati’s Duke Law Journal note, “Toward a Comparative Approach to the Crime of Genocide.”

Sainati, who worked for a Chicago social justice law and policy center in her 2L summer, says she appreciated the varied perspectives from faculty and students on such issues as torture, terrorism, and human rights that she subsequently found at the Duke-Geneva Institute in Transnational Law. “It was also an incredible opportunity to engage with students from around the world.”

At Duke, Sainati has immersed herself in HIV and AIDS law and policy through three semesters in the Duke Law Clinics, working under the direction of Clinical Professor Carolyn McAllaster and Supervising Attorney Allison Rice. Sainati recalls being impressed by the passion with which McAllaster, director of the AIDS Legal Project and the advanced AIDS Policy Clinic, spoke of her work when they first met. “I felt that there was a lot to learn from her, both about the work she does and in cultivating that sort of passion for the law and what the law can do for people,” Sainati says.

She found enormous satisfaction in her initial clinic experience, particularly in working with a client to set up a stand-by guardianship for her child; because the client was herself under the guardianship of her mother, the situation was a case of first impression in North Carolina. Sainati counts learning to explain the law in lay terms as a lasting skill she derived from her clinic experience, and one that helped her come to a better understanding of the legal principles involved.

That skill helped Sainati during two subsequent semesters in the AIDS Policy Clinic, in which she largely focused on analysis and educational outreach, for clients and caregivers, relating to the Patient Protection and Affordable Care Act. “When you have to go out and talk to [lay] people, you engage with the law at a deeper level,” she observes. “They just want to know what the law says and what it actually means for them. It’s been a fascinating process to focus on the individual impact the law can have and take that back to the larger level again, asking how it will work as policy? It’s something that will only help me in the longer term.”

Bound first for a post-graduate clerkship with Judge Rosemary Barkett of the U.S. Court of Appeals for the 11th Circuit, Sainati hopes the longer term will include engagement in policy issues as a legal academic. She expresses gratitude for the academic advisers, models, and mentors she’s found at Duke Law, including the international and comparative law faculty for whom she has worked as a research assistant — Professors Ralf Michaels, who also supervised her DLJ note, Curtis Bradley, and Laurence Helfer. Helfer, she notes, has nurtured her academic goals by bringing her into projects at different phases so she can see how they develop from preliminary research to completion, and advising her on how to formulate a research agenda.

“To have professors who are so willing to learn about you and to know what it is you want to do and to help you get there — I don’t think I can say strongly enough what tremendous value that is to helping fulfill your ultimate goals. I feel very fortunate.”