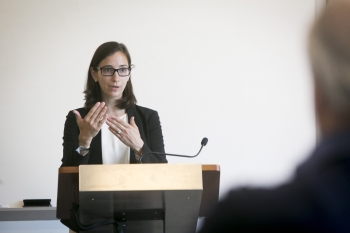 John de Figueiredo agreed to teach Analytical Methods in Duke’s Master of Judicial Studies program because then-Dean David F. Levi asked — but he was unsure what to expect, and he certainly did not expect the judges to enjoy his class.

“Many people who attend law school chose this path because of their reading, writing, and analytical ability — not because of their mathematical prowess,” says de Figueiredo, the Russell M. Robinson II Professor of Law, Strategy, and Economics at Duke Law. “I thought, ‘I’m going to teach analytical methods to a group of judges? People who are advanced in their careers and know what they’re doing?’ I thought there is no way the judges are going to want to dive into quantitative material.

“But David said, ‘Yes, and they’ll like the course, they’ll like you, and you’ll like them.’” Levi was right, de Figueiredo says. “I absolutely love teaching in this program. The judges want to understand conceptually how to make better decisions, to understand what’s going on and what questions to ask when a case involves difficult economic and statistical issues. They’re not there for a grade — they want to make better decisions. Teaching them is incredibly rewarding.”

De Figueiredo is one of several Duke Law faculty who have taught in the LLM program for judges in the Bolch Judicial Institute since its launch in 2012. For these professors, giving up a few weeks of summer is a modest trade for the uniquely interesting, enlightening — and sometimes frustrating — experience of teaching a group of handpicked and highly accomplished judges from state, federal, and international courts.

Judges bring experience and inside perspective on the judiciary and are willing to share their insights freely. And the judges are committed to learning and building knowledge and understanding, which leads to deep engagement and rich classroom discussion. For scholars who study the judiciary and institutions, this time with judges is invaluable.

“We as faculty are really teaching and learning at the same time,” says Professor Marin Levy, who teaches a course on qualitative research and the judiciary, often drawing on her own research on judicial administration and federal courts. “There is so much expertise in the room — it is incredible to be able to take advantage of it as a scholar. So often with scholarship you need to know something in order to know what more you need to learn. If you didn’t have the ability to talk to judges in this sort of setting, you could undertake an enormous project and not realize you’re asking the wrong questions until it’s too late.”

Levy says her interaction with LLM judges has informed and sometimes shaped her research and scholarship. “So much of what we do as professors in law school is engage with court opinions,” she says. “To have the opportunity to meet and talk with the people who draft those opinions on a daily basis is tremendous. They can say, ‘Actually, when I interpret a statute I apply it this way rather than that way.’ To learn about that and to have a real dialogue is rare.”

Margaret Lemos, the Robert G. Seaks LL.B. ’34 Professor of Law and senior associate dean for faculty and research, says teaching Advanced Topics in Federalism to the judges has proven similarly useful to her own work, which focuses on constitutional law, legal institutions, and procedure.

“When we get into issues the judges know well — the relationship between state and federal courts, for instance, or selection and retention policies — they have really interesting things to say,” Lemos says. “They are able to speak directly from their experience in a way that illuminates the issues for the faculty. But it also can be hard for the judges to step out of their own experiences to think about these issues as students. We are asking them to think more broadly and critically about their jobs, and sometimes their personal experiences don’t align with the research that’s out there.”

To help the judges turn a scholarly eye on the judiciary, the LLM program requires each student to complete a thesis paper with the hope that some will be published in law reviews. The work is creating a new body of scholarship written by sitting judges and offering insider perspective on the courts to the broader legal academy.

Several LLM graduates have published their theses in law reviews around the country. And earlier this year, Duke’s Law and Contemporary Problems published seven LLM thesis papers in a special edition of the journal titled Judicial Institutions and Behavior (Vol. 82 No. 2). Journal editors believe it is the first time a law journal has been exclusively devoted to scholarly works by sitting judges.

The judges’ work is important because it addresses “features of the judiciary that have been largely ignored by conventional law scholarship,” says Lemos.

In a foreword for the Law and Contemporary Problems volume, Levi (now Levi Family Professor of Law and Judicial Studies, director of the Bolch Judicial Institute, and the founding force behind the master’s program) wrote that the master’s program was specifically created “to address those issues most relevant to the judiciary, expose judges to recent scholarship about the judiciary, and provide intellectually ambitious members of the judiciary the extraordinary opportunity to engage in research and scholarship under the guidance of leading academicians.” The emerging thesis papers, he added, explore “important topics in the study of the judiciary: How should courts be constituted, how do judges decide cases, and what can courts do to improve the delivery of justice. The breadth of these topics and the depth of the research in this volume serve as evidence that the goals of the master’s program are being realized.”

“At first it was not clear to me why a judge would want to invest the time and effort in pursuing an LLM,” says Jack Knight, the Frederic Cleaveland Professor of Law and Political Science and a faculty advisor to and instructor in the LLM program. “As we have progressed through several classes now, I have come to the conclusion that most of the judges participate in the program because of their intellectual curiosity. They desire the intellectual experience that comes from the interactions with other judges and the faculty here at Duke. The judges and the faculty all benefit from these interactions.”

But even for the most intellectually curious judges, writing a thesis can be daunting. Many of the judges are years, sometimes decades, out of law school. All have demanding full-time jobs that don’t easily make time for hours of reading, research, and writing. And most are used to being in command, not being critiqued. But some find it to be one of the most satisfying parts of the program, and a few have continued to pursue scholarly projects beyond graduation.

“The LLM program gives judges the time and tools to reflect on matters of great interest to them,” Levy says. “We think of the thesis as a significant amount of work, but it’s also an opportunity for someone to learn more about something they care about and to think of responses and solutions to real challenges they face. Carving out that time and space to explore their own field, I think many of them see it as a real gift.”

When Justice Ann A. Scott Timmer LLM’18 was given the chance to write on a topic of her choosing, she picked something she had experienced first-hand: re-selection, or the manner by which a state renews a current judge’s judicial term, whether by re-appointment or retention or contested election. Now the vice chief justice of the Arizona Supreme Court and previously a judge on the Arizona Court of Appeals, Timmer was first appointed in 2000 and has since been retained three times. Over the course of nearly two decades as a sitting judge, she had often wondered if the specter of re-selection influenced judicial decision making.

Her observations, however, had been limited to the anecdotal: She had not observed that re-selection affected substantive outcomes, but she had noted that judges facing retention often seemed to recuse themselves from hearing hot-button issues. Other judges she spoke to, particularly those in partisan election states, acknowledged that the pressure existed but did not believe it affected them. The LLM thesis presented an opportunity to put her questions to both a qualitative and quantitative test.

As Timmer explained in an interview with the Bolch Judicial Institute’s journal, Judicature, she wanted to “try to come up with something that has some empirical evidence that I can try to measure, but also add a little of what I can do, which is interviews, because I figured I would be trusted.’” She received a substantial response. “With only an exception or two, people were very forthcoming and candid and enjoyed talking about the issue.” (Read her full paper in Law and Contemporary Problems Vol. 82 No. 2.)

The judges learn how to develop and produce a scholarly project during a two-part course that is the heart of the LLM program. The Study of the Judiciary, taught by Knight and Professor Mitu Gulati over both of the program’s summer semesters, guides the judges through empirical, biographical, and jurisprudential examinations of the judiciary as they prepare to conduct their own inquiry into a topic of their choosing.

“We know we are climbing a steep mountain, and we don’t tell you often enough that we are climbing very quickly,” Gulati tells his class during one of their last sessions before the judges depart campus and prepare to spend the rest of the year working on thesis projects. “We are grateful to you for cooperating. The exercises that we make you go through are the things we do to ourselves and our students, the things we think you need to do to get to the answers to the questions we set out in the beginning: What is your idea? Why is it important?”

Faculty do find, however, that they can’t always make the same demands of judges as they would other students. Though the judges arrive at Duke with the enthusiasm and energy of 22-year-olds, they do in fact keep their day jobs. So when a judge is absent or can’t complete readings due to courtroom business that must continue, professors don’t pull them aside in the way they might a JD student.