Thankful: Sharpe and family celebrate his pardon of innocence at Duke Law

Dontae Sharpe joined Duke Law students at the Innocence Project Thanksgiving Celebration days after he received a pardon of innocence from Gov. Roy Cooper and more than two years after he was exonerated of murder charges. 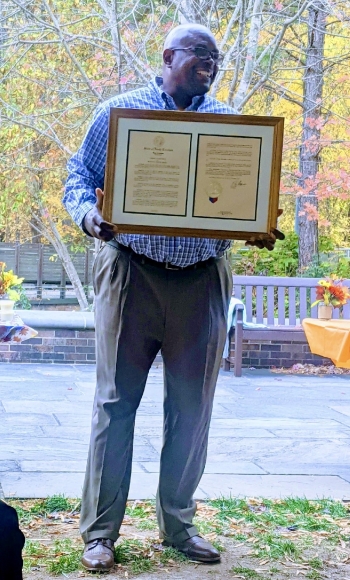 Dontae Sharpe holds his pardon from the governor

On Sunday, Nov. 21, a joyous Dontae Sharpe stood side-by-side with family, including his mother Sarah Blakely, to receive a copy of his pardon of innocence at the annual Innocence Project Thanksgiving Celebration held at Duke Law.

North Carolina Governor Roy Cooper's Nov. 12 pardon garnered national news coverage. A Duke Law Wrongful Convictions Clinic client, Sharpe, now 46, was incarcerated for 24 years after being sentenced to life in prison for a 1994 murder that he did not commit. He was exonerated on August 22, 2019, following a decade of work by faculty and students of the clinic, which took his case in 2010.

"Theresa called me and said, ‘Hey, Mr. Pardon Man.’ I was like, ‘What do you mean, “Mr. Pardon Man?"' he recounted. "She said, ‘The governor just pardoned you.’ That just left me smiling on my couch and kind of awestruck."

After Sharpe's exoneration, it took more than two years of advocacy, marches, and protests outside the governor's mansion to get the governor to grant a pardon of innocence, which will finally enable him to apply for the $750,000 in compensation he is entitled to receive from the state for his wrongful conviction. He has vowed to use his platform to help change the system for other wrongfully convicted people.

“I don’t understand how you can know somebody’s innocent and still have all this red tape,” he told students in the clinic and Duke Law’s Innocence Project chapter after his exoneration. “The system seems set up to try to discourage you. You need something when you get out because it’s a whole new world. Not everybody has money. It should be cut and dried.”

For more on Sharpe's case, read the story that appeared in Duke Law Magazine after his exoneration.