Transitional Justice in the 21st Century: Current Developments and Challenges 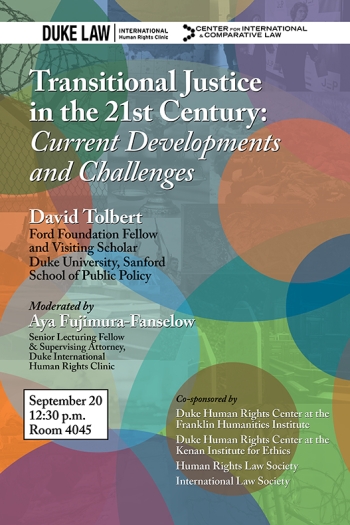 David Tolbert is currently Ford Foundation Fellow and Visiting Scholar, Duke University, Sanford School of Policy. He was President of the International Center for Transitional Justice from 2010 – 2018, and a former UN Assistant-Secretary-General. Tolbert served in a number of senior positions over a period of almost a decade at the UN International Criminal Tribunal for the former Yugoslavia (ICTY), including as Deputy Chief Prosecutor, Deputy Registrar and Chef de Cabinet to the President. He also was appointed by the UN Secretary-General as Registrar (UN Assistant Secretary-General) of the Special Tribunal for Lebanon and, at an earlier stage, as UN Assistant Secretary-General and Special Expert to the UN Secretary-General on the Khmer Rouge Trials. He also has held the positions of Executive Director, ABA-CEELI and Chief, General Legal Division, UNRWA. During 2009-10, Tolbert was a Senior Fellow at the United States Institute of Peace and served on the ASIL High Level Panel on the United States and the ICC. He has published over 40 scholarly articles on international criminal justice, transitional justice and human rights as well as a wide range of op-eds and shorter articles in the Huffington Post, Project Syndicate and other publications. Tolbert received a LL.M. with distinction (Nottingham), a J.D. (UNC) and a B.A. magna cum laude (Furman).