Eric Tucker and Jenny N. Wheeler ’22 argued a fictional Supreme Court case challenging the U.S. Department of Homeland Security’s 2019 expansion of the definition of “public charge” under the Immigration and Nationality Act. 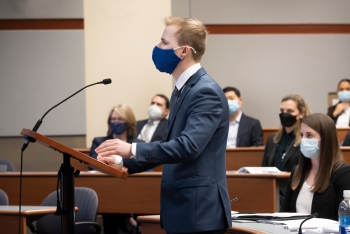 Eric Tucker ’22 was the winner in the final round of the 2022 Dean’s Cup moot court competition held Feb. 22 at the Law School.

Tucker and fellow finalist Jenny N. Wheeler ’22 argued a fictional Supreme Court case challenging the U.S. Department of Homeland Security’s 2019 expansion of the definition of “public charge” under the Immigration and Nationality Act.

Justice Goodwin Liu of the California Supreme Court, Justice Anita Earls of the North Carolina Supreme Court, and Judge Allison Jones Rushing ’07 of the U.S. Court of Appeals for the Fourth Circuit presided over the argument. Before announcing the winner, Liu praised the finalists for the quality of their oral advocacy.

“Both of you were tremendously prepared, persuasive, articulate, thoroughly researched,” he said. “We would be lucky to have attorneys of your quality appear in real life in our court. And I think any one of you who watched this argument know that whatever separates these two people is only going to be by a hair’s breath because both arguments were truly, truly fantastic.”

Earls echoed Liu, calling the argument “incredible,” and noting “how difficult you made our job.”

Added Rushing: “You really made it a conversation with the bench, which is what we are hoping for, and if we really had to decide this case, that’s what helps judges decide.”

The act allows for the exclusion or removal of immigrants who are likely to become a “public charge,” a term that historically referred to those who are dependent on cash benefits from the government to survive or are institutionalized for a long term. In 2019, the Trump administration expanded that definition to include those who receive government assistance such as food stamps, housing vouchers, and Medicaid. The rule was upheld by the Fourth Circuit the following year in CASA de Maryland v. Trump, and the Dean’s Cup finalists were charged with arguing a fictional appeal of the decision to the U.S. Supreme Court.

Tucker, who represented the plaintiff, argued that “for more than 100 years, Congress, the courts, and the executive branch have all concluded that the public charge provision conveys a single standard: Only those likely to become primarily dependent on the government are excludable as public charges.

“Even if this court were to conclude that the public charge provision contained some ambiguity, the rule was still unreasonably divorced from the standard text, structure, and history.”

Wheeler, representing the government, argued that the case was “about maintaining this court’s longstanding deference to reasonable agency interpretations of ambiguous statutory terms.

“Most appellate advocates have to wait years—if not decades—to argue in front of such a highly-regarded panel of judges," he said. "To have the opportunity to write a brief and present an argument before these judges as a law student is an incredibly invaluable experience."

Said Wheeler: “Participating in Dean’s Cup was an incredibly fun, challenging, and rewarding process. I learned so much about the public charge provision—a longstanding provision of immigration law I hadn’t even heard of before last semester. I’m especially grateful to all my friends that practiced with me and for the opportunity to compete against great advocates.”

The Dean’s Cup, initiated in 1963 by Deans E.R. Latty and J.D. Johnston, is Duke’s premier oral advocacy competition. Held annually for second- and third-year students and organized by the Moot Court Board, the Dean’s Cup seeks to highlight the school’s best appellate advocates. The competition centers around a case taught in the Appellate Practice class offered every fall.