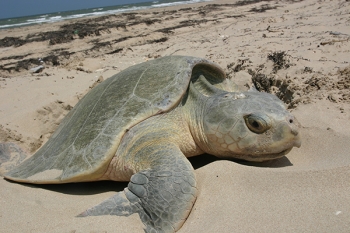 A 2010 settlement brokered by the Duke Environmental Law and Policy Clinic has led to a significant reduction in the number of sea turtles killed, maimed, or captured by gill nets in North Carolina’s coastal waters.

The settlement agreement reached between the clinic’s client, the Karen Beasley Sea Turtle Rescue and Rehabilitation Center, and the North Carolina Marine Fisheries Commission (MFC) and Division of Marine Fisheries (DMF), established new rules for gill-net fishing off the state’s coast. The center had sued under the federal Endangered Species Act, as all five sea turtle species that are found in North Carolina waters are threatened or endangered.

Since then, incidental “takes” of sea turtles by gill net fishers have dropped dramatically, possibly by as much as 80 percent, said clinic Supervising Attorney Michelle Nowlin JD/MA ’92.

“Prior to the settlement, we were looking at more than 3,000 takes of sea turtles per year, solely in North Carolina waters, and by only this one small segment of the fishing industry,” said Nowlin, who supervised the Duke Law and Nicholas School of the Environment students who worked on the lawsuit and settlement in 2009 and 2010 and on matters relating to its implementation. “The settlement brought that down to a maximum of about 600 per year.”

Significantly, she added, the settlement was tailored to preserve a viable commercial gill-net fishery while minimizing its impact on the federally protected sea turtles.

“The settlement resulted from the concentrated and cooperative efforts of all the parties involved,” said Jean Beasley WC’58, the executive director of the Beasley Center on Topsail Island.

The new rules implemented under the settlement specified the size and type of gill nets allowed and the time frames in which they can be used in order to limit their impact on turtles.

“The settlement agreement required the tailoring of the gill nets to better focus on the fish they were designed to catch, which is flounder,” said Nowlin. “Flounder are bottom-dwelling fish, and there is no need for a net that occupies the entire water column.  And by setting the nets out only at night, when sea turtles are resting and not engaging in mating or foraging, the turtles are less likely to be caught in the nets and drowned or harmed.”

The settlement, which was deliberately crafted to apply to both commercial and recreational “gillnetters,” also established an enhanced program to observe the interactions between the turtles and fishermen, and a Sea Turtle Advisory Committee (STAC), with membership appointed by the MFC, to advise state authorities on matters related to sea turtle protection. It further required the state to apply for a federal incidental take permit for sea turtles in North Carolina’s large and small mesh gill net fisheries. The permit, which incorporated the settlement terms, was finalized last September, completing the agreement.

“The people who were the principals in the lawsuit, who entered into the settlement agreement, and who participated in the STAC all worked hard to understand one another and to reach positive outcomes,” said Beasley, a former teacher and school administrator. She noted her particular satisfaction with the balance struck by the settlement agreement.

“The purpose of the suit and my purpose in serving on the STAC, which was disbanded when the incidental take permit was issued, was to be an advocate for the sea turtles. That is and was my primary goal. At the same time, I understand the human aspect and the impact of some of the regulations and restrictions that came about. We tried to find ways to protect the sea turtles and to still offer people a way to fish and to make a living from fishing.”

The formation of the STAC, in particular, helped forge relationship and bred mutual respect among its members, said Beasley. “I certainly came to know, respect, care about, empathize with, and understand some of the folks that served on that committee much better than I had before,” she said. She is gratified that a new STAC will be established under the federal permit at the request of interested parties, including commercial fishermen, although she does not plan to be involved at this time.

As a self-employed in-shore fishing guide, Tom Roller T’03 works fulltime in the clean, shallow estuaries of North Carolina’s “Crystal Coast” that are now subject to the federal permit. He is highly critical of the state’s failure to ban “destructive gear,” like gill nets, as other states with comparable water conditions, habitat, and wildlife species did in the 1980s and 1990s. That’s why he calls the 2010 settlement of the Beasley Center lawsuit “the most significant piece of reform affecting North Carolina marine resources in the last several decades.”

In more than seven years of guiding prior to the settlement, Roller said, “I never saw more than one or two live sea turtles in the back waters of the estuary. I saw hundreds of dead ones.”

“They put their heart and soul into collecting all of the research and data and the filing of their requests to have access to records, which was an extraordinary achievement. They were involved in every aspect of the lawsuit and the settlement. It was groundbreaking in the international sea turtle community to use student attorneys in an action like this, and it made a huge impact. I hope it served as a model for student attorneys going into the environmental field.”

That changed remarkably as soon as the settlement agreement in the Beasley Center lawsuit adjusted fishing practices in the area. “All of a sudden I started seeing sea turtles – not in a week or a month, but within days. And it’s gotten better and better since then. I see juvenile greens and Kemp’s ridleys all the time.” Once summertime gill-net fishing was stopped in Southern Core Sound, he said by way of example, other species also came back to an area that was otherwise seasonally “devoid of life” beyond the pinfish and needlefish and others small enough to escape the gear.

“We see bonnethead sharks in huge numbers, as well as ladyfish and larger bluefish and other sport fish species that we don’t see anywhere else – ones that are still not found in comparable numbers in the adjacent areas where there is still gill netting,” he said. “We see multiple shark species and even spotted eagle rays. I attribute this directly to the sea turtle settlement. It helped the entire ecosystem.

“Sometimes that’s the benefit of the Endangered Species Act,” he said. “It allows us to do good broadly by focusing on one thing, even if it is highly controversial.”

Beasley was recently named “Conservationist of the Year” by the North Carolina Wildlife Federation for her action on behalf of sea turtles and for the care injured turtles receive at the facility she established in her daughter’s memory. (View a National Geographic video about the work of the newly expanded refuge.)

“Nobody accomplishes anything in a vacuum – I’m just the representative,” she said. “We have a wonderful network of volunteers.”  There is still a lot of work left to do, she added; sea turtles continue to face a wide range of man-made perils, and worldwide, only about one percent survive to reproductive age.

Nowlin and the Duke students who worked on her “David vs. Goliath” lawsuit, brought after more than a decade of unsuccessfully trying to reduce turtle by-catch through public advocacy campaigns, were a critical part of that network, Beasley added.

“They put their heart and soul into collecting all of the research and data and the filing of their requests to have access to records, which was an extraordinary achievement,” she said. “They were involved in every aspect of the lawsuit and the settlement. It was groundbreaking in the international sea turtle community to use student attorneys in an action like this, and it made a huge impact. I hope it served as a model for student attorneys going into the environmental field.”

Nowlin and several of the clinic students involved in the case subsequently presented talks and presentations at meetings of the International Sea Turtle Association, which routinely draws representatives from more than 100 countries.

Patrick Duggan JD/MA’10, now a trial attorney with the Environmental Crimes Section in the U.S. Department of Justice, presented at the 2011 conference. Taking on significant responsibilities in the Beasley Center lawsuit and settlement was foundational, he said, in helping him gain familiarity with the processes and procedures involved in environmental litigation as well as confidence in his litigation abilities. Along with a substantive understanding of North Carolina’s commercial fishing industry that is relevant to his current practice, the case taught him “that knowledge, evidence, and support can come from anywhere,” he said.

“If you had told me that support for a case about regulating fishermen would come from fishermen themselves and regulators themselves, I would have balked,” Duggan said. “Today, I try to set an example at the DOJ by gathering information from all parties involved in my cases and understanding all the relevant viewpoints. If I am working on fisheries case I am sure to touch base with local regulators, residents, nonprofits, and others. You never know where crucial information or a new perspective will surface.”

Having been enrolled in the clinic while pursuing a master of environmental management degree at Duke’s Nicholas School of the Environment, Courtney Shephard said the Beasley Center lawsuit taught her that legal work is inherently multifaceted.

“Many of the problems that we encountered required knowledge of economics, science, policy, and community dynamics,” she said. “Working on the Beasley Center case required us to evaluate the design and cost of different types of fishing gears, analyze trends in sea turtle ‘takes’ communicate with state and federal agencies, and create strategies for bringing together the needs of fishers and conservationists. It was one of the most challenging and rewarding projects that I have ever worked on.” It also affirmed her interest in pursuing a career in law; Shephard received her JD from the University of Colorado in 2014.

“Michelle Nowlin and [Clinic Director] Ryke Longest are phenomenal lawyers, and learning from them shaped my intentions in law school: what I wanted to study, what types of experiences I wanted to gain, and most importantly, what type of a lawyer I wanted to be,” Shephard said.