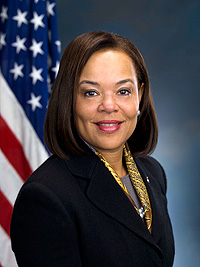 Martina Lewis Bradford ’75, deputy sergeant at arms of the United States Senate, will address members of Duke Law School’s Class of 2011 at their hooding ceremony on May 14.

Bradford was appointed to her position by Senate Majority Leader Harry Reid, D-Nev. in December 2010. The Office of the Sergeant at Arms is the chief protocol office, chief law enforcement office, enforcer of the Senate Rules of Procedure, and overseer of all operational, technological, facility and security matters in the U.S. Capitol and all U.S. Senate offices.


A member of the Law School’s Board of Visitors since 1994 and life member since 2000, Bradford had a distinguished career in law, business, public policy, and public service.

Early in her legal career Bradford became attorney for the Finance Division of the Interstate Commerce Commission, eventually becoming chief of staff and counsel to the commission's vice chairman.

After serving as Republican counsel to a Senate subcommittee and then to a committee of the House of Representatives, Bradford entered the corporate world at AT&T as government began to actively seek to reorganize the giant telecommunications corporation. In 1996 she moved from AT&T to its spinoff, Lucent Technologies, where she became corporate vice president for Global Public Affairs.

In 2000, Bradford became a partner at Akin Gump Strauss Hauer & Feld in Washington, where she focused on public law and policy lobbying. Active in a variety of professional, arts, sports, and philanthropic organizations, she was newly retired in 2006 when she became a senior adviser to Reid, charged with assisting him in increasing diversity in the Senate workforce.

The Class of 2011 hooding ceremony will begin at 5:30 p.m. in Cameron Indoor Stadium on Duke University’s West Campus. Seating is limited. For more information, contact the Office of Student Affairs.