The Committee is charged with ensuring compliance with an international treaty that protects civil and political rights. 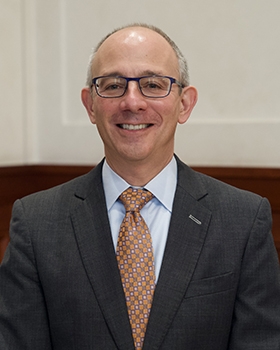 Helfer was announced as the U.S. nominee for the position on the international monitoring body in December 2021. The Committee is comprised of 18 independent experts charged with monitoring compliance with the International Covenant on Civil and Political Rights (ICCPR), an influential human rights treaty that has been ratified by 173 states parties.

Helfer will engage in multiple meetings with UN missions, foreign ministries, and civil society groups leading up to the June 17 election at UN headquarters in New York. If elected, he would serve a four-year term beginning in 2023. Currently there is no U.S. member on the Committee.

“The Committee’s engagement with governments has changed numerous laws and helped to improve the lives of individuals all over the world,” Helfer said.

“I am honored that the United States has nominated me to be part of that crucial effort.”

The ICCPR, adopted in 1966, protects universally recognized civil and political liberties and fundamental freedoms, including the right to life, liberty, and physical security; the right to be free from slavery and torture; the right to a fair trial; and the freedoms of expression and association.

As the principal body monitoring implementation of the ICCPR, the Committee meets three times a year in Geneva. Its main responsibilities are reviewing periodic reports from the state parties, evaluating communications from individuals, and issuing interpretive guidance in general comments.

Helfer said that, if elected, he would focus on how the Committee interacts with state parties and other stakeholders in two key areas: identifying impediments to full implementation of the ICCPR, and guarding against retrenchment and backsliding. For example, during the COVID-19 pandemic governments have imposed restrictions on the freedoms of movement and peaceful assembly. In recent scholarship, Helfer has examined how human rights are threatened by domestic crises, nationalist populism, and backlashes against international law and institutions.

“The Committee can help states uphold their obligation to respect civil and political liberties, notwithstanding these challenges, including by explaining how important and unassailable the obligations in the ICCPR are and must remain,” Helfer said in his campaign statement.

Helfer’s campaign video also highlights the importance of taking “appropriate measures to streamline the recording process and imposing unnecessary burdens on states, especially developing and smaller countries.” However, he also stresses that “we must do this while guarding against any watering down of the ICCPR’s obligations or adopting reforms that would undercut the Committee’s functions.”

In a tweet on Dec. 17, Secretary of State Antony Blinken said that the U.S. welcomed the opportunity to nominate Helfer.

“His legal expertise sets him apart to help monitor the implementation and protection of civil & political rights enshrined in the International Covenant on Civil and Political Rights,” Blinken said.

A career spent engaging with the international human rights system

He is co-director, with Professor Rachel Brewster, of Duke Law’s Center for International and Comparative Law and a senior fellow with Duke’s Kenan Institute for Ethics. Helfer also is a permanent visiting professor at the iCourts: Center of Excellence for International Courts at the University of Copenhagen and will soon complete a four-year term as co-Editor-in-Chief of the American Journal of International Law. He is the author, coauthor or editor of six books and author or coauthor of more than 100 other publications on his diverse research interests.

A member of the State Department’s Advisory Committee on International Law, Helfer has also addressed the UN Human Rights Committee and Human Rights Council on discrimination on the basis of sexual orientation and gender identity and lectured at intergovernmental conferences organized by the Council of Europe. With collaborators, he has studied how sub-regional courts in Africa and the Americas have expanded their jurisdiction from economic integration to other issues, including human rights.

In a recently published article with Clare Ryan, “LGBT Rights as Mega-Politics: Litigating Before the ECtHR,” 85 Law & Contemporary Problems 59-93 (2021), Helfer examines how European Court of Human Rights case law on LGBT rights has been shaped by diverse contestations over sexual orientation issues in the countries against which applications are filed.

“My research is based on a careful analysis of treaty texts and case law as well as interviews with government officials, judges, lawyers, and civil society groups in regions all around the world,” Helfer said.

“These diverse professional experiences have taught me that UN monitoring bodies such as the Human Rights Committee are essential to helping governments live up to their obligations to protect civil and political rights. These experiences have also given me a unique perspective on how human rights apply to real-world problems and are implemented on the ground.”

Another recent example is Helfer’s work to promote the Marrakesh Treaty, which seeks to expand access to copyrighted books to persons with visual disabilities. He co-authored The World Blind Union Guide to the Marrakesh Treaty (Oxford University Press 2017), with Molly K. Land, Ruth Okediji, and Bunyan S. Womble Professor Emeritus of Law Jerome Reichman. With Land and Okediji, he reviewed states’ implementation of the treaty in “Copyright Exceptions Across Borders: Implementing the Marrakesh Treaty,” 42(6) European Intellectual Property Review 332-340 (2020).

Citing these and other professional accomplishments, the State Department said in support of Helfer: “The United States values the critical work of the Human Rights Committee and believes civil and political rights are an integral part of the international human rights framework.”

“The nomination of independent experts like Professor Helfer reflects U.S. commitment to the rule of law and the importance the United States places in addressing the multitude of challenges facing our world today.”