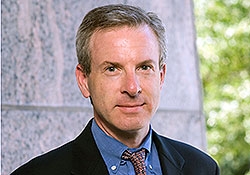 Two of Jonathan Wiener’s recent projects highlight his expertise in international climate policy, risk analysis, and regulation. In addition to reporting on the state of climate policy in the Trump administration for the Climate Economics Chair (CEC) in Paris, Wiener, the Perkins Professor of Law, Environmental Policy, and Public Policy, led an analysis of transatlantic patterns of risk regulation for the International Risk Governance Council (IRGC) based in Lausanne, Switzerland.

In a June policy brief for the CEC, Wiener analyzed attempts to change U.S. climate policy introduced by the Trump administration. Wiener also gave presentations at MIT on Sept. 29 and at the annual conference of the CEC in Paris on Oct. 11, on these unfolding developments.

Wiener emphasized that domestic and international climate policy is not determined by a single decision-maker but “evolves in a complex web of multiple actors, institutions, and options,” a fact that presents a range of opportunities as well as challenges. For example, he noted, under the terms of the 2015 Paris Agreement, which now includes 195 countries but from which the Trump administration has said it intends to withdraw, any withdrawal must wait for three years from its effective date, plus another year of notice — which works out to Nov. 4, 2020. Meanwhile, the Trump administration is still considering its plans for two other 2016 international accords pertaining to climate change that enjoyed significant support from the industries involved: the International Civil Aviation Organization accord to limit greenhouse gas emissions from commercial aviation, and the Kigali Amendment to the Montreal Protocol to phase down hydrofluorocarbons (HFCs). Wiener helped negotiate the initial Framework Convention on Climate Change, adopted at the Rio Earth Summit in 1992, to which the U.S. remains a party.

“It’s not so easy for a president to undo past policies,” said Wiener, who co-directs the Rethinking Regulation program at the Kenan Institute for Ethics. “There are several steps in administrative law or legislation that are required before he can make significant change.” To rescind a past federal agency rule, a new administration must satisfy the doctrine of the 1983 U.S. Supreme Court ruling in Motor Vehicle Manufacturers Association v. State Farm (the State Farm case), in which the Court held that an agency must give a reasoned explanation for the change and the alternatives it evaluated.

The Trump administration has also pledged to roll back Obama-era domestic policies aimed at reducing U.S. greenhouse gas emissions, including the standards set in 2015 in the Environmental Protection Agency’s “Clean Power Plan” (CPP). The rule, aimed at reducing emissions from the electric power sector, has an uncertain future after being stayed by the Supreme Court while a challenge in the U.S. Court of Appeals for the D.C. Circuit remains pending. EPA has asked the court for further delays. Depending on how the case is resolved, eliminating the CPP may require a new agency rulemaking, making it subject to the State Farm doctrine and other challenges, Wiener said. Meanwhile, the D.C. Circuit has so far rejected EPA’s proposed delays of its rule limiting methane emissions from oil and gas wells. A related Bureau of Land Management (BLM) rule limiting methane emissions on public lands, after an attempt by Senate Republicans to use the Congressional Review Act to undo it was blocked by three GOP senators, has been suspended by BLM.  On the other hand, an August 2017 decision by the D.C. Circuit blocked an EPA rule phasing down HFCs, on the ground that EPA lacked authority under the particular provision of the Clean Air Act it had invoked.

“The upshot is that the Trump administration will face some institutional challenges and litigation as it tries to undo some of the Obama administration’s climate change policies,” he said. “And, if a new administration is elected in 2020, it too will face limits on changing prior policies.”

Another gray area, Wiener said, is the extent to which federal agencies will use calculations of the social cost of carbon — a composite estimate of all the different damages that result from climate change caused by carbon dioxide. In late March, President Trump issued an executive order eliminating the Interagency Working Group (IWG), which was updating its government-wide estimate of the social cost of carbon that individual agencies would then use in developing their own analyses of policies and projects pertaining to climate change.

“The executive order removed the IWG’s government-wide estimate,” said Wiener. “But that does not mean that each agency cannot make its own estimate for use in decision-making.” Several agencies may be required by statute to do so, he said, pointing to a recent decision by the D.C. Circuit prodding the Federal Energy Regulatory Commission to use the social cost of carbon, and two recent District court decisions in Colorado and Montana saying the same to the U.S. Forest Service and the U.S. Office of Surface Mining, respectively. Wiener has recently started a project with colleagues at Duke’s Nicholas Institute for Environmental Policy Solutions on the legal requirements for agencies to assess the social cost of carbon going forward. (Read more on the social cost of carbon in the Environmental Law Newsletter.

With Trump administration policy changes on climate and the environment still in flux, Wiener said that resistance to rollbacks could come from environmental groups, businesses, courts, and Congress. One legislative change that some moderate Republicans have advocated, he noted in his policy brief, would be to adopt a national carbon tax while simultaneously removing the EPA’s regulatory authority over greenhouse gases.

A noted authority on risk, Wiener led a group of European and American experts analyzing “Transatlantic Patterns of Risk Regulation” for an IRGC study commissioned by the European Parliament to help inform trade negotiations and international regulatory cooperation. The new study involved comparative assessment of regulations regarding food, automobiles, chemicals, and pharmaceuticals.

In its report released in April, the group stressed that the reality of transatlantic regulation is not a simple dichotomy of a European approach versus an American approach, but one of selective stringency on both sides, Wiener said. “Regulatory stringency varies from risk to risk, both across and within sectors.” Thus, the report observes, efforts by trade negotiators to remove trade barriers by harmonizing standards need not always mean weakening them, but could involve a variety of adjustments on both sides.

“A further point we make in the report is that the effort to harmonize these standards through trade negotiations leaves unanswered the question, ‘At what level or in what form should they be harmonized?,’” he said. “In some cases, variation may be warranted. And even if harmonization is the objective, one needs to evaluate the best way to harmonize and the best standard to adopt. The best option is not necessarily one of the two already in force in each jurisdiction — there could be an even better option. For social well-being, it matters which standard is adopted.”

The report pointed to the opportunity to learn from differing approaches to risk regulation in the U.S. and EU, and urged the use of adaptive regulation, which is the focus of much of Wiener’s current work. “Rather than using international trade negotiations to either harmonize all the regulatory standards across the U.S. and Europe, or to have conflict about them in trade forums like the World Trade Organization, we suggest the U.S. and Europe seize the opportunity to learn from the variation. What are the actual outcomes associated with different standards?  How can we choose even better approaches?” Wiener, said that this approach to comparative research and learning from regulatory variation is related to the efforts at retrospective review of regulation, another topic he has studied and written about extensively. “What do the different regulatory standards actually mean for the risks, benefits and costs faced by societies? How can we learn how to improve regulatory standards over time?” Wiener will host a Rethinking Regulation conference on adaptive regulation at Duke Law in November.

In mid-October, Wiener will present the IRGC report on “Transatlantic Patterns of Risk Regulation” in Brussels at meetings hosted by the German Marshall Fund of the United States, including to experts at the European Parliament, European Commission, and U.S. Mission to the EU.