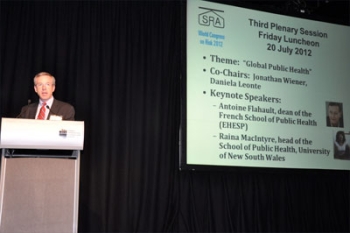 Professor Jonathan Wiener served as co-organizer and co-chair of the World Congress on Risk, held in July in Sydney, Australia.  This major event was the third in the series, convened every four years by the international Society for Risk Analysis (SRA), following the prior World Congresses on Risk held in Belgium and in Mexico.

Wiener, Duke’s Perkins Professor of Law, professor of public policy, and professor of environmental policy, is an international leader in risk analysis and policy.  He served as the SRA’s president in 2008 – the first lawyer or law professor elected to that post.  “My top priority as SRA president was the global growth of the society and the risk analysis community,” said Wiener.  “Building on SRA’s strong base in North America, Europe and Japan, we have now added new regional branches of SRA in Russia, China, Latin America, Australia-New Zealand, Korea, Taiwan, and Egypt.  I was excited to help organize the next World Congress on Risk in Sydney and help build the society across the Asia-Pacific region.”

The opening Plenary session at the World Congress featured remarks on “Extreme risks: Shocks and disasters,” by Pierre-Alain Schieb, head of the Futures Program at the Organization for Economic Co-operation and Development (OECD), and David Zhang from the University of Hong Kong, an expert on the role of climate change in spurring political upheaval.  The closing Plenary session focused on the future of global public health, with remarks by Antoine Flahault, the dean of France’s National School of Public Health, and Raina MacIntyre, the dean of the school of public health at the University of New South Wales, Australia.

Among several special sessions was one examining the potential for catastrophic surprises, including extreme climate change, pandemic disease, terrorism, and a presentation by Jaan Tallinn, a co-creator of Skype, about the risks of artificial intelligence.  Another special session addressed the earthquake, tsunami and nuclear crisis that hit Japan in 2011.  The assessment and regulation of chemicals in countries around the world occupied another key session.

Wiener noted the broad range of disciplines represented by the nearly 400 attendees in Sydney, and the wide array of risks addressed at the conference:

The conference had a special focus on “synthetic biology,” the emerging research on designing new organisms.  Plenary speakers on this cutting-edge field included Michele Garfinkel of the European Molecular Biology Organization, and Robert Friedman of the J. Craig Venter Institute.

“Synthetic biology is an important and fascinating issue for risk analysis,” Wiener observed.  “It could have major benefits as new organisms are designed to perform useful functions for food, energy, medicine, pollution control, and other applications.  But there is also concern about potential health and ecological impacts of those new organisms.  The challenge is how to think about both these opportunities and risks, before or as the technology is emerging,” Wiener added.  “Speakers at the World Congress also pointed out the advent of individual do-it-yourself designers, and the challenge of ensuring that legal rules or ethical codes shape their conduct to protect public health and the environment.”

”Synthetic biology, as well as climate change, artificial intelligence, and other emerging issues, are good examples of the challenges facing experts in risk assessment and management,” Wiener said.  “These issues are complex, necessitating in-depth understanding of the technical systems, the multiple consequences, and the public values that must shape a sensible policy framework.”

Wiener and his conference co-chairs, Professor Alison Cullen of the University of Washington (also a past president of SRA) and Dr. Daniela Leonte of the Australian Department of Health, spent more than two years on conference preparations.  They were gratified, he said, to attract a rich exchange of ideas, and almost 200 new members to SRA at the event.  The lead sponsors of the 2012 World Congress of Risk were the SRA, the U.S. National Science Foundation, and the Alfred P. Sloan Foundation.