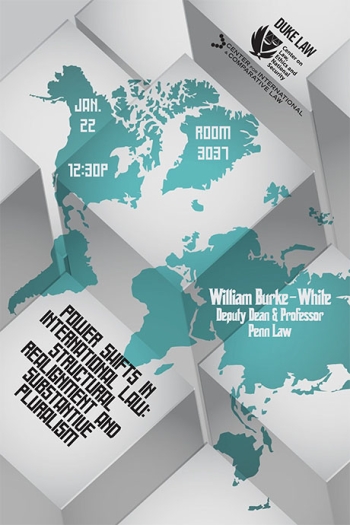 William Burke-White, the Richard Perry Professor and Inaugural Director of the Perry World House at the University of Pennsylvania and Deputy Dean and Professor of Law at Penn Law, will give a talk titled "Power Shifts in International Law: Structural Realignment and Substantive Pluralism."  This lecture is sponsored by the Center on Law, Ethics and National Security and the Center for International & Comparative Law.  Lunch will be served.

For more information, including a copy of his paper, please contact Ali Prince.

Dr. Anne Gallagher, Officer of the Order of Australia (AO), an international civil servant, legal practitioner, teacher, and scholar, will give a talk titled "From Peacekeepers to Slave Traders: A Lawyer's Journey to the United Nations and Beyond."  This lecture is co-sponsored by the International Human Rights Clinic, the Center for International and Comparative Law and the Human Rights Center at the Kenan Institute for Ethics.  Lunch will be served.

William Burke-White is the Richard Perry Professor and Inaugural Director of the Perry World House at the University of Pennsylvania and Deputy Dean and Professor of Law at Penn Law.  Considered an expert on international law and global governance, he served in the Obama Administration from 2009-2011 on Secretary Clinton’s Policy Planning Staff, providing the Secretary direct policy advice on multilateral diplomacy and international institutions. He was principal drafter of the Quadrennial Diplomacy and Development Review (QDDR), Secretary Clinton’s hallmark foreign policy and institutional reform effort. Professor Burke-White has written extensively in the fields of international law and institutions, with focus on international criminal and international economic law. His work has addressed issues of post-conflict justice; the International Criminal Court; international human rights, and international arbitration. His current research explores gaps in the global governance system and the challenges of international legal regulation in a world of rising powers and divergent interests. In 2008 he received the A. Leo Levin Award and in 2007 the Robert A. Gorman award for Excellence in Teaching.