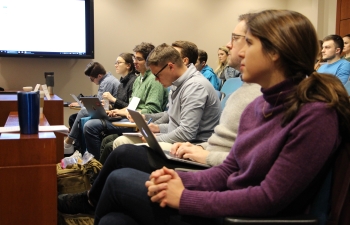 A record 500 Duke Law students attended short courses focusing on practical and professional skills during the Law School’s 10th annual Wintersession, held Jan. 4 to 8 — the last few days of winter break. Many enrolled in two of the 29 half-credit classes on offer, all taught by leading scholars and practitioners, in subjects ranging from accounting, insurance law, and antitrust litigation to prosecutorial ethics, design thinking, and professional communication.

Taylor Brennan ’20 appreciated the opportunity to hone her skills in public speaking in two classes, Hearings Practice and Professional Communications for Lawyers. “As a student pursuing litigation when I graduate, I want to take every opportunity to practice my oral advocacy, she said. And because the classes are not graded, Wintersession is a great time to practice these skills in a lower-stakes, more comfortable setting.”

Brennan’s instructor in Hearings Practice, Collin Cox ’01 — one of many alumni teaching at Wintersession — drew lessons from real cases he’s litigated as partner at Yetter Coleman in Houston, where practice focuses on representing plaintiffs and defendants in high-stakes commercial cases. Cox, who has taught the course for four years, said he always enjoys sharing his own courtroom successes and mistakes with his students, and is always impressed by how quickly they master skills.

“Watching them wrestle with things that took me a long time to figure out — they get it in a day and they can perform,” he said. “Having a chance to give them a perspective that they wouldn’t hear day by day in law school is a real honor.”

Brennan said she took away plenty of court-specific skills from Cox’s class, including tips for writing an effective brief, strategies to prepare for oral argument, a review of different types of motions, ways to use visual aids with a jury, and a comparison of practicing in state versus federal court. Equally important: his advice on building relationships.

“Mr. Cox taught us about the importance of reaching out to opposing counsel, not to speak about the case but simply to develop rapport and encourage communication, which can go a long way in an adversarial system should tensions start to run high,” she said. “He also emphasized introducing yourself to the judge when you will be arguing in an unfamiliar jurisdiction because you may learn information about that judge’s style and personality that will help you save your client time and money, and hopefully, win your motion or case.

"And he suggested reaching out to local counsel because they may have information about the judge or rules of the court that you need to know.”

Learning from working attorneys “provides a lot of useful context,” said Jon Choi JD/MSC ’21, who took Hearings Practice and a course that focused on team dynamics, Leadership and Communication in the Law. “I think that in the crucible of the market, there are a lot of lessons to be gained in ways that don’t necessarily occur in the paradigm of academia.”

Instructors Paige Gentry ’13 and Elle Gilley JD/LLM ’13 returned to campus for their second year of teaching Leadership and Communication in the Law. Gentry, an associate in the Washington, D.C. office of Klein Hornig, and Gilley, an associate at Ropes & Gray in Boston, developed and pitched the class to Duke Law after noticing a lack of “soft skills” training for new associates at their first firms.

They followed a discussion of communication styles as the building block for working in a team, with filming an exercise that had student teams rank the tools they would use to survive a hypothetical hurricane. The class reviewed the videos of their interactions and evaluated their individual communication and group dynamics before discussing how greater attention to process could help the teams be more effective at reaching their goal.

“Very few teams talked about their overarching goals — how are we going to survive? What is our process? What are we going to do?” Gentry noted. “Everyone focuses on output, but process is what you have to pay attention to in order to create a successful team.”

Gentry and Gilley also discussed ways to give and receive effective feedback and the value of proactive communications with colleagues and team members. Choi said those skills will be useful in his activities at Duke Law and the Nicholas School of the Environment “to be more intentional in the way that I create team culture in a lot of my assignments — setting expectations and being really clear in communications.”

And he did so immediately, texting members of his moot court team during a class break to tell them he wouldn’t be able to meet an upcoming deadline. “It had kind of been driving me nuts,” he said. “I got a bunch of texts back — and it turns out all of us are drowning right now. Being more intentional about sharing expectations is really helpful.”

Dan Katz ’83 has taught Deposition Practice and Strategy each year since Wintersession began in 2011 with half the number of students enrolled. Katz, a partner at Williams & Connolly in Washington, D.C., developed the course based on his own extensive litigation experience and what he believes new associates need to know about a critical trial lawyering skill.

“Depositions are the key building block for trial preparation,” he said. “They allow you to know what your witnesses are going to say and what the opposing side’s witnesses are going to say, so that you’ll be accurate when you tell the jury in your opening statement what the evidence is going to show. So I relate strategy decisions that were made by lawyers in cases and how they played out at the actual trial.”

“They’re really engaged and they have a great grounding in the rules of civil procedure and evidence, so even though they generally haven’t been exposed to depositions before, they have a lot of really insightful questions and comments about the process.”

He also considers it an annual treat to visit campus and see how Durham and Duke have changed since his own law school days.

“In 1983 people didn’t go downtown to eat. There was maybe one bookstore downtown,” Katz recalls. “Now there are lots of restaurants and it’s a real place for foodies. I love coming back to Durham.”