A federal judge in Raleigh vacated the murder conviction and ordered the release on May 23 of Wrongful Convictions Clinic client Charles Ray Finch, who served 43 years in prison for a murder he did not commit. 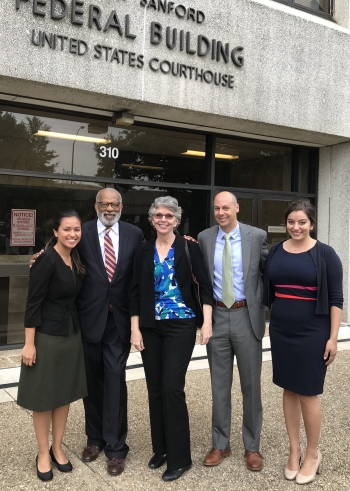 Finch, 81, was released from Greene Correctional Institution later that day.

John S. Bradway Professor of the Practice of Law James Coleman, Jr., the clinic’s co-director, served as Finch’s lead counsel at the hearing. Charles S. Rhyne Clinical Professor of Law Theresa Newman ’88, the clinic co-director, and Supervising Attorney Jamie Lau ’09 also were in the courtroom; both represented Finch during state court proceedings.  Duke Law graduates who had worked on the case through the Wrongful Convictions Clinic attended as well.

Finch’s release was the culmination of a 15-year legal battle for Coleman, who took up his case before the clinic was established in 2007. “Ray was unwavering in maintaining his innocence and today proves that he was, and he’s been vindicated,” Coleman told reporters outside the courthouse after the ruling.

Finch was convicted in 1976 for the murder of Richard Holloman, a Wilson County, N.C., gas station owner who was killed in his store during a robbery attempt. He had originally received a mandatory death sentence, but in 1977 the state Supreme Court commuted the sentence to life in prison after North Carolina’s statute was declared unconstitutional by the U.S. Supreme Court.

Over the years Finch had filed motions for relief, both pro se and through counsel, and been denied. In December 2015, a habeas petition the clinic made on Finch’s behalf to the U.S. District Court for the Eastern District of North Carolina was again denied, but the Fourth Circuit Court of Appeals reversed the district court’s decision in January.

Considering evidence and testimony from the 1976 trial, the three-judge panel found issues including an “impermissibly suggestive” police line-up, ballistic evidence that failed to connect a shotgun shell from Finch’s car with the crime scene, and significant credibility problems with the state’s only eyewitness, according to the opinion. In addition, the opinion noted that new evidence also undermined the credibility of the Wilson County chief deputy, Tony Owens.

Writing for the panel, Fourth Circuit Chief Judge Roger L. Gregory said, “Finch has overcome the exacting standard for actual innocence through sufficiently alleging and providing new evidence of a constitutional violation and through demonstrating that the totality of the evidence, both old and new, would likely fail to convince any reasonable juror of his guilt beyond a reasonable doubt.”

At the May 23 hearing, North Carolina Assistant Attorney General Leslie Cooley Dismukes told U.S. District Judge Terrence Boyle that the state did not believe it could succeed in an evidentiary hearing against Finch. She said the state would not object to Finch’s release.

Boyle ordered Finch to be released from custody no later than noon on Friday, May 24 and, with Coleman’s assent, granted the Wilson County district attorney 30 days to decide whether or not to retry him.

Five hours later, a guard rolled Finch, who uses a wheelchair due to a stroke he suffered in prison, out of Greene Correctional Institution, a minimum-security prison near Maury, N.C., and into the arms of relatives including his daughter, Katherine Jones-Bailey.

“I know some people do horrible things to other people and their families deserve justice,” she said. “But every time I went over my dad’s case, I never thought that he did this. So they still didn’t get justice. We all ended up suffering.”

Jones-Bailey, who was two years old when her father went to prison, said she forgave those responsible for his incarceration.

“You reap what you sow,” she said. “So their lives could not have been easy, knowing they did this to a man.”

“I’m happy to be free,” Finch said after his release, standing with the help of family members. He told reporters that he would like to travel to the Bahamas, but more immediately yearned for chicken from Parker’s Barbecue in Wilson.  The clinic team joined Finch and his family at Parker’s for a celebratory meal.

Sarah Milkovich ’19, who worked on Finch's case along with Eileen Ulate ’19, called the resolution “the ultimate graduation gift.”

“It’s truly an honor to have been any part of it,” she said. “So many students have gone before us and done so much hard work, and Eileen and I get to have this celebratory moment on behalf of all of them. It’s the perfect way to finish off an education here.”

Milkovich, who is moving to Boston to begin her legal career with Ropes & Gray, said that when she enrolled in the Wrongful Convictions Clinic it became her main priority at Duke Law. She said she and Ulate will remain involved with the clinic, noting that alums call themselves “lifers.”

“I hope they give us another assignment,” she said. “I want to stay hooked in and I know Eileen feels the same way. We want to be waiting in the wings to help the next person."